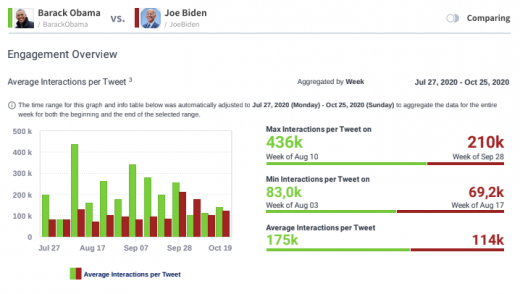 How engagement trumps headlines: the election in social media

Digging below the vanity metrics reveals who is really winning the social media race.

President Donald J. Trump’s Twitter feed has been one of the major sources of news headlines for the past four years, and as of this month, it’s the sixth most-followed account on the platform. But that obscures the real news, according to a new report from Socialbakers, the social media management and measurement platform.

Biden’s Twitter game. For one thing, Biden’s previously sluggish Twitter presence grew steadily as he became a strong contender for the Democratic nomination, and reached a peak in August after he took top place on the ticket. In January, he could boast only 8.2% of Trump’s monthly interactions total. By August, he had passed 50%.

More importantly, in September Biden actually surpassed Trump on average interactions per tweet (104,000 versus 103,000); indeed, Trump’s average interaction rate has been in decline since June. What that means is that, with a following only 12% of Trump’s 87 million, Biden is winning the interactions per user game off the charts. It’s also worth noting that Biden is strongly outperforming Hillary Clinton against Trump in the comparable months of 2016.

Socialbakers CEO Yuval Ben-Itzhak confirmed this: “Compared to Hillary Clinton in 2016, key engagement metrics for Biden’s Twitter profile in 2020 are much closer to Trump’s, and have trended upwards at a higher rate.” We asked him to run a comparison between Biden and former President Barack Obama over the last three months (Obama’s is currently the most followed account on Twitter). The results were revealing.

“Over the last few months Biden’s followership has really grown very quickly, even compared to Obama. You’ll also see that Biden has really ramped up the volume of his Tweets too. Despite that, Obama’s profile was still more engaging overall during the three months time period we have analysed.” The takeaway: Biden’s Twitter feed may not be making the headlines, but it’s engaging with a fast-growing audience at a rate which just shades Trump, and has been competitive with Obama over the last few weeks. 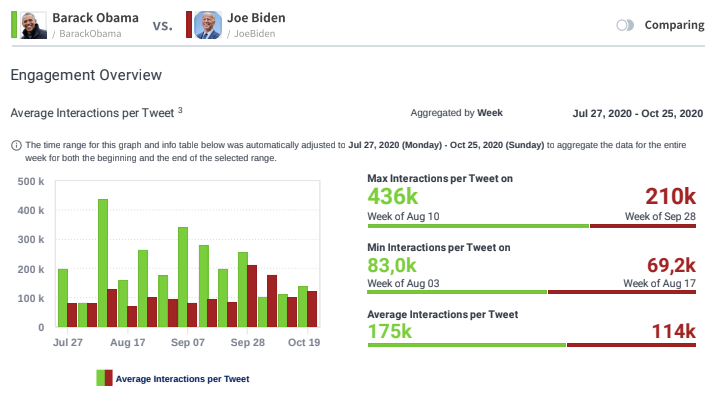 Trump still winning Facebook. The other side of the social media coin is Trump’s continued dominance of Facebook, not as a user, but as a ubiquitous presence. Positive Trump headlines led the three most engaging posts by media outlets on Facebook. As in 2016, the earned media coverage on Facebook is a valuable asset for the Trump campaign.

Said Ben-Itzhak: “Trump’s distinct advantage on Facebook is still clear as day — Socialbakers data shows that while Trump-related headlines dominate both Facebook and Twitter in terms of reach and engagement, Facebook is the platform where pro-Trump headlines are out-performing anti-Trump headlines in media. The top performing posts from media on Facebook were all pro-Trump in tone and were posted by Fox News. On Twitter, on the other hand, we can see that the top performing media posts are all anti-Trump in tone.”

Two Americas. It’s also notable that Socialbakers was able to highlight the profound differences in media consumption among pro-Trump and pro-Biden social media users. “We’re using data pulled directly from the Facebook and Twitter APIs to identify and segment audiences based on their ‘preferred’ candidate,” explained Ben-Itzhak. “We then analyze each segment in order to identify patterns and commonalities in their engagement habits with different types and sources of content. The findings of the report show significant disparities in the media consumption habits of Biden and Trump supporters that align with their respective political affiliations.”

Trump and Biden supporters have only one media outlet in common when looking at their top 10 outlets most followed: The Associated Press. Apart from that, based on this metric, the two audiences live in different media worlds. Trump supporters favor One America news, Fox News and Breitbart News; Biden supporters go to The New York Times, The Washington Post, and CNN. These are, of course, users clearly identifiable as Trump or Biden supporters through their social media activity: it might not reflect the general population.

Why we care. There are plenty of reasons to care about the election, but that’s not what we’re highlighting here. Both from the perspectives of social media marketing and influencer marketing, this underlines the importance of digging deeper than vanity metrics like numbers of followers to find the content audiences are truly engaging with.