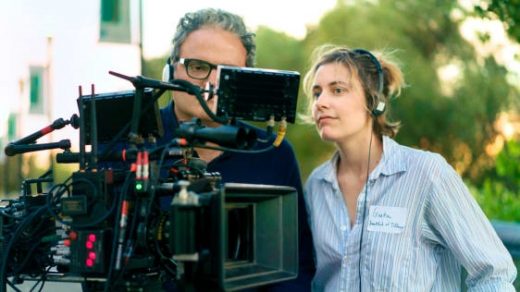 In one of the opening sequences of Greta Gerwig’s Lady Bird, we see scenes from an all-girls Catholic high school: teens singing hymns, teens in Spanish class, teens taking communion. In one classroom, a bulletin board is decorated with block letters that read, “9/11 Never Forget.” It’s fall of 2002, almost exactly a year after the Sept. 11 terrorist attacks.

And then quickly we’re back to Lady Bird (played by Saoirse Ronan), who is more concerned with how she’s going to get into a New York college (and away from her relatively normal life in Sacramento) than with current events. She’s in many ways a typical, self-centered but ambitious teenager (the name Lady Bird is a self-upgrade of her given name, Christine)–she’s not agonizing over terrorism and the ensuing war the U.S. is getting into. And yet, history and current events are embedded in how she and her friends and family are interacting with the world.

“I’m always interested in how your personal life and history go together,” says Gerwig, who wrote and directed the film. “Because I think often in films they’re portrayed as if they happen in distinct arenas.”

Birds of a feather ? #ILoveLadyBird

In real life, the two arenas aren’t distinct. We’ve felt that in 2017 possibly more than ever. We’re still dealing with actions and consequences set in motion by 9/11. Every notable point in U.S. history has gradually gotten us to the divisive America we live in now. And yet, we fight with our parents, eat snacks with our best friends, think about our dreams, and where we want to go next. “In a way, it felt to me like a way the movie could explore what’s happening now without setting the film now,” Gerwig says.

Lady Bird sits in the middle of this tension, recreating a specific historical moment in a way that feels deeply personal and not too heavy-handed.  The film captures that feeling of not being in New York or D.C. on Sept. 11, 2001, of being distanced from the action and experiencing it primarily through news broadcasts. “Obviously 9/11 was a terrible tragedy in New York, but it was a national tragedy,” Gerwig says. “And it was experienced nationally, even all the way across the country where there wasn’t an association with it literally. But it had some sort of seismic, shifting moment.”

The resulting fallout manifests in Lady Bird in ways both big and small. At several points in the film, we see Lady Bird on the couch, watching Matt Lauer report from Afghanistan. Gerwig says she combed through old news footage to thread through the movie, creating timelines of her characters’ lives and matching them with historical sequences of events.

The economic effects of 9/11 are felt more concretely, like when Lady Bird’s father Larry (Tracy Letts) loses his job at a bank. Later, he runs into his son during a job interview– as it turns out, they’re both going for the same position. Meanwhile, the family is concerned about how they will pay for Lady Bird’s college tuition, even as her mother Marion (Laurie Metcalf) works double shifts as a psychiatric nurse.

“These undercurrents of what was happening and what was coming, the internet and cell phones, the speeding up of the erosion of the middle class. All of that was going on then,” Gerwig says. “And we’re living through the consequences of a lot of that now.”

That underlying tension underscores one of the major themes Lady Bird explores: that growing up involves understanding your parents in ways you never thought possible, and vice versa. And even though the film focuses on Lady Bird, it’s in many ways about her mother, who comes to terms with the loss she feels when it seems like her daughter floats further and further away.

It’s about the age when you finally start realizing you can hurt your parents’ feelings, like when Lady Bird makes her father drop her off away from school so her classmates won’t see the state of their car. Or how she refers to her home as “on the wrong side of the tracks” when she’s with her wealthy friends.

“I’m always interested in places where characters can’t go with each other. These things we can never know about each other,” Gerwig says. “Lady Bird doesn’t see her mother being kind to a coworker, giving him a gift. Or her father’s job interview. Sometimes people show each other extraordinary love and the other person will never know it.”

In one especially poignant moment, Lady Bird’s boyfriend Kyle (Timothée Chalamet) lies about losing his virginity to her. When Lady Bird becomes visibly upset, Kyle is a little disdainful. He starts talking about how many Iraqi civilians have died at the hands of the U.S. military–Lady Bird cuts him off. “Different things can be sad,” she says. “It’s not just war.”

It’s not that she doesn’t care about the state of the world, but “she also is just in her own opera,” Gerwig says. Part of Lady Bird’s growth as a character is how she is forced to reckon with what is going on around her, with the huge ramifications of globalization and terrorism, even as she faces the emotional turmoil of getting older and leaving the things and people who make you feel secure. 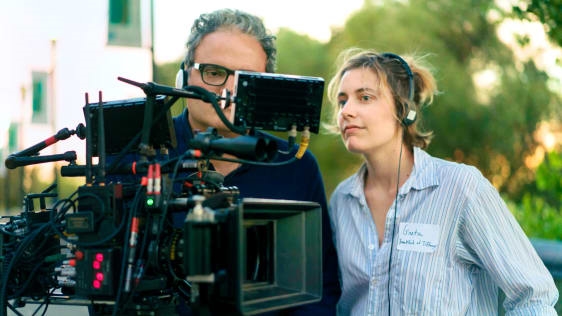