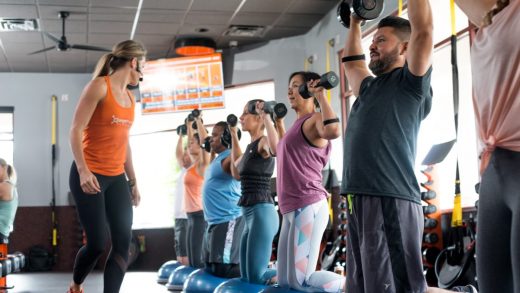 How Orangetheory grew to dominate the boutique fitness industry

“Don’t worry,” says the guy in Nike shorts next to me, with a friendly nod of  both empathy and encouragement. “It looks way harder than it is.”

I’m at the downtown Los Angeles location of Orangetheory, the wildly popular fitness boutique franchise dedicated to intense heart rate-driven workouts. You may have seen one where you live, with its Nickelodeon-like orange splat logo out front and glowing lights within. You may even have confused it with a nightclub; it’s not, but from Omaha to Anchorage, they’re all the rage.

My trepidation must be palpable if a bystander feels the need to comfort me. And, honestly, I am nervous— despite being in shape; I do a weekly spinning class, Pilates, and the occasional trendy workout.

But this group training session looks serious. There are two dozen of us, split into two teams, about to start rigorous drills on cardio equipment, free weights, balance trainers, and resistance bands. While one group works on treadmills, the other alternates between circuit floor stations and water rowers. Throughout the hour, we sport heart-rate monitor straps that send our numbers to the screens up above.

Surprisingly, I  keep up with the others during the intimidating yet accessible regimen, which perhaps explains its cult status—700,000 members and climbing. The nine-year-old company says it is the fastest-growing fitness franchise in the world, with 875 studios across the U.S. and 999 worldwide.

“This workout is a workout that is a new fitness category,” says Ellen Latham, cofounder of Orangetheory. “We’re not just another spin studio that puts another name on spinning.”

High-intensity interval training (HIIT), which is sprint-based exercise for the endurance-inclined, has become a top fitness trend in the last few years. You see it all over celebrity Instagram accounts or newly sprouted boutique studios. As famed trainer Jillian Michaels once put it, “If you want to be a calorie-burning machine, HIIT is the key.”

Orangetheory puts a unique spin on the practice by combining it with technology and behavioral psychology, then adding a dash of spontaneity. To start, club members never know what to expect at each class–it can be speed-focused, endurance training, or more strength-based. There’s no detailed schedule, just the element of surprise; clubs constantly vary modalities–split between cardio and weight-lifting–to avoid the dreaded fitness plateau. (A 26,000-strong Reddit community is devoted to dissecting every day’s mystery workout.)

“That constant changing of stimuli keeps your body adapting over the course of time and not just getting into the rut of doing the same thing every day,” says Orangetheory director of fitness Michael Piermarini. “That helps your body achieve results a bit more quickly.”

Fitness gamification–the art of applying competitive points during your workouts to encourage motivation–is nothing new. The behavioral strategy is the basis of cult favorites like indoor cycling club Flywheel, home app Peloton, and of course, Fitbit. It’s been called the future of health and wellness, the savior of boring workouts, and the only thing to get millennials off their tushes.

These nifty heart rate gadgets ensure one competes, essentially, against their own capabilities. The intensity level is as personalized as it can get, with one’s body setting the parameters. There’s no guesswork involved. But perhaps more importantly, it offers instant feedback–and immediate gratification.

“The heart rate system allows everyone to push themselves to exactly where they need to be,” explains Dr. Joel French, Orangetheory’s senior director of research, fitness, and wellness. “You can have that elite athlete training right next to a grandmother . . . and they can get the same kind of workout in the same class.”

Therein lies the beauty of Orangetheory, whose clients are generally between 28 and 40. The accessible method accommodates all levels. It’s a customized workout, but within the social framework of a group class. Instructors demonstrate each move, aided by multiple monitors, which replay the moves on the loop. Trainers come around every so often to check progress or align one’s posture.

Following my first class, I had a total of zero points in “the zone.” By my second class, I scored 10 points in the orange zone. By my third, 13, at which point I found myself telling someone new next to me: “Ya know, it’s really not as painful as it looks.”

The power of afterburn

Orangetheory cofounder Ellen Latham was a trained physiologist who taught aerobics for nearly 40 years when she opened her own Pilates studio in 2006. Although her business fared well in Ft. Lauderdale, Florida, clients often complained of needing to supplement the class with cardio.

“They were coming to me, asking, ‘What can I do for fat burning that will be as effective as teaching the body to respond to Pilates?’” recalls Latham. The feedback ultimately inspired her to open a bigger studio that could accommodate all a client’s fitness needs—one dedicated to “the ultimate metabolic workout.” It would have heart rate training, cardio, a power component, and muscle building.

In 2008, Latham opened her new creation, “Ellen’s Ultimate Workout,” which was essentially the first iteration of Orangetheory. She used scientific studies to combine workouts specifically to reach afterburn. The post-exercise oxygen consumption meant clients burned 15% to 20% more calories following the workout. If you burned 500 calories in class, you’d shed another 100 more calories within the next day. “Not huge, but that adds up,” says Latham.

The budding entrepreneur also saw a group of people who were mostly intimidated by aerobic classes, believing they were underperforming in comparison to those around them. Latham wanted to put the emphasis on the individual—backed by data.

“There was a psychological component as to why many people don’t stay with it, especially in group training. They really don’t feel successful,” she says. “I’m very much into the belief of competing against yourself . . . specifically your last best self.”

In the treadmill section of the workouts, for example, she stressed that people could walk, jog, or run, based on their capabilities. In lieu of group scoring, heart rate monitors would only track each member’s’ personal progress.

Within months, there were waiting lists. Lathan instantly knew she her workout filled an industry void. When a customer remarked, “One of these has to be on every corner,” the fitness founder started to map out her future.

In 2010, Latham brought on cofounders Jerome Kern and David Long, who now serves as CEO. She then did the opposite of what most companies do: The brand started in small suburban communities–first in Florida, followed by Arizona.

Despite successful franchise numbers, the trio halted growth within the first year. The cofounders decided they needed to focus on redeveloping internal structure and building stronger educational systems, specifically how the complex workouts were constructed and taught.

The newly formed company went to work composing its own fitness language to ensure it was both understandable to the trainer as well as the consumer.

By 2012, Orangetheory expanded to 11 states. By 2015, there were 300 studios, with international locations in Australia, the Dominican Republic, and Mexico. By last year it was deemed one of the fastest-growing women-owned businesses—and the fastest-growing fitness franchise.

Part of the attraction was the “guaranteed money” for franchisees, says Latham. The studios require 2,800 square feet and roughly 15 employees, with initial investment generally hovering around $327,000, which is more than a yoga studio but far less than a traditional club. Orangetheory was recently named the second-best fitness franchise based on its training and support, operations, franchisor/franchisee relations, and financial opportunity, reports Franchise Business Review. (Crunch Fitness holds the No. 1 spot.)

The average drop-in class averages $28, though price varies based on location. Consumers, meanwhile, particularly appreciate the small, boutique feel, a trend that now dominates the fitness landscape. “They don’t walk in a gym where there’s different employees all the time,” says Latham.

Orangetheory has since expanded to include a headquarters lab led by clinical exercise physiologist who designs the workouts. They send out 90 workouts a month to their franchisees. Franchises “don’t have to do much work,” promises Latham.

Orangetheory isn’t slowing down: The Boca Raton-based company will soon open its 1,000th location in Portland, Oregon. California and Texas have the most locations. In 2017, it saw over $738 million in profit, a nearly 40% increase from the year prior. Females compose 80% of members, but the company sees rapid growth with men, many of them CrossFit devotees.

And more growth is on the horizon and the company continues to invest in research: It just hired a dietitian to expand a nutrition section that will pair diets with workouts. But don’t expect it to stray from workouts built around the afterburn fitness theory. For instance, it won’t open a yoga studio, no matter the demand. The studios will remain devoted to intense workouts.

“We’re very clear what we’re experts in,” stressed Latham, “so we’re looking to continue to carve our lane out.”

Despite its wild success, Orangetheory stresses it’s not the end-all of workouts. It might encompass various types of exercise, but instructors encourage members to seek out a full range of styles.  “We like to refer to our workout as the multivitamin . . . Other workouts, like yoga, ballet barre, are single vitamins,” says Latham.

Latham is  confident Orangetheory will only solidify itself as a household name, the same way companies like Crunch have. The only challenge is helping newbies like me overcome our initial intimidation.

“I’m always encouraging people to go give it a try, even if you think you can’t do it,” she says. 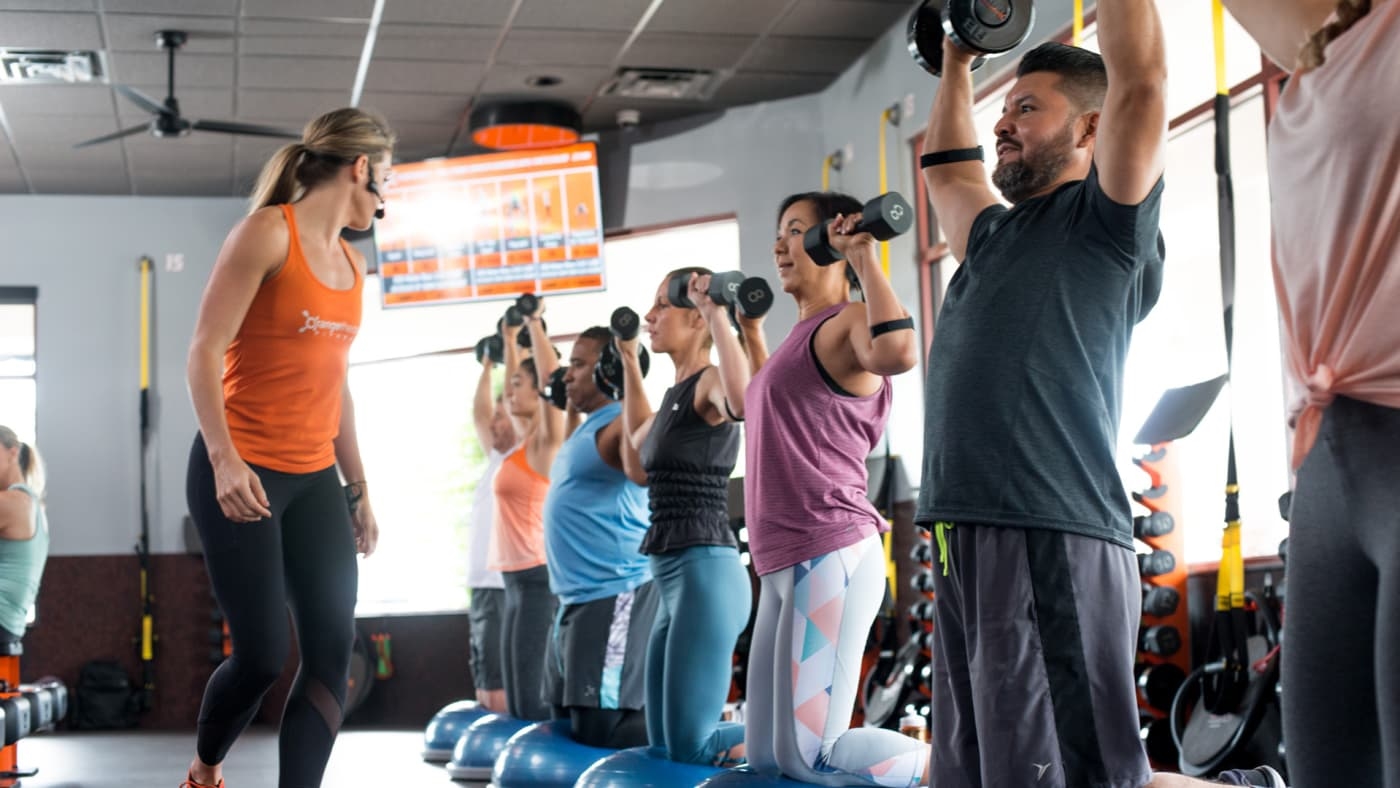