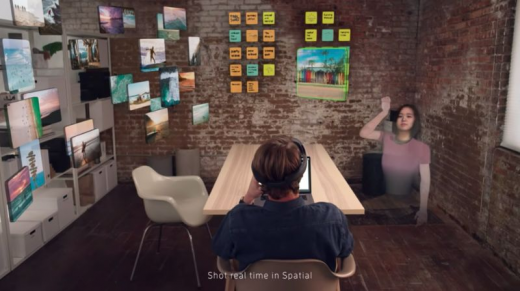 How Smartglasses Can Simulate an Office-Like Experience During WFH

Businesses of all sizes have spent the past year adapting to the disruptive force of the Coronavirus pandemic. With a constant emphasis on evaluating safety protocols and what the future of office work looks like, augmented reality may well well become a key component in the future of collaboration.

With vaccines arriving around the world, we’re entering a pivotal period in realizing what the future of office work will look like. With many employees benefiting from a life without commutes and the comfort of working from home (WFH), could we turn to technology to recreate office environments digitally?

The data above shows that 74% of businesses intend to retain remote roles even after the pandemic has passed, illustrating the significant effect that COVID-19 has had on how businesses operate.

With major industry players set to release the next generation of augmented reality smart glasses over the coming years, could AR wearables hold the key for keeping offices connected in a remote world?

Augmented reality technology enables us to see digital work assets superimposed on top of real-world environments and delivered through a handheld or wearable device. Unlike the use of hand-held devices like smartphones and tablets, utilizing AR technology in wearable hardware has the potential to significantly enhance WFH collaboration in a number of ways:

More Space in Smaller Workspaces: AR smart glasses offer an additional screen or heads-up display that can be projected into the user’s line of sight – helping to minimize workspace by removing the need for more monitors and space-consuming devices or documents.

By utilizing AR smart glasses, it’s possible to streamline daily tasks that may require a second screen – like comparing different windows of data or spreadsheets. It can also help users to continually monitor emails or social feeds in real-time.

Greater Opportunities for Collaboration and Training: The immersive multi-dimensional experience that AR offers has the potential to virtually transport employees into engaging meetings. In these augmented meeting spaces, users can display 3D rendered models for collaborative design, broadcast documents that are displayed to groups in real-time, and automatically display brainstormed suggestions on a live whiteboard.

Augmented reality can allow users to provide remote assistance and training tutelage for new employees. This can be particularly useful in engineering and healthcare industries where workers can share their line of sight with experienced employees to gain advice and guidance that can be shown using AR renderings on compatible smart glasses.

Greater Visualization Opportunities: During an initial concept or design phase, augmented reality allows users to bring products or designs to life. By pulling ideas or objects out of monitors and bringing it to life in an augmented environment, design teams can efficiently interpret prototypes and concepts without anything being lost in translation.

For instance, engineers, architects and landscaping contractors using AR-enabled smart glasses to support conceptualizations and final appearances of design ideas can merge the computer-generated design to collaborate on any late changes before beginning the construction process – all from a WFH environment.

How AR Will Create Virtual Offices

With augmented reality wearables, it will be possible to simultaneously be at home and ‘at the office’. By putting on AR smart glasses, you can step into a digital office room – eliminating any problems that can arise from open plan environments or shared spaces such as distracting background noise. 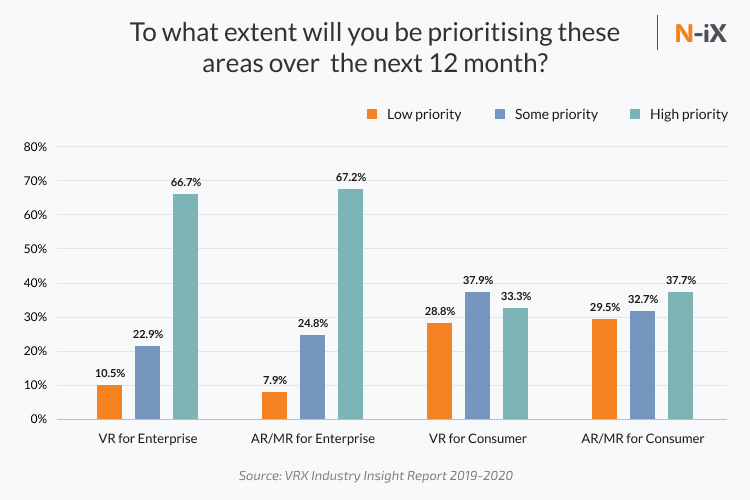 The coming year may see significant steps taken by businesses in order to adapt to the era of the ‘new normal’ and increase their efforts to better accommodate WFH employees. According to N-iX data, over 67% of survey respondents have placed a high priority on incorporating augmented reality and mixed reality for enterprise into their business models over the next twelve months.

The flexibility that AR provides can be imperative to productivity. Entire office spaces can be rearranged entirely to suit workers, and meetings between colleagues can be conducted in a single room in real-time despite this not being the case in reality. This efficient use of augmented technology can essentially make available office space stretch further without businesses losing out on valuable collaborative opportunities among teams.

Another upside for the adoption of augmented reality in a remote workplace is the savings that can be returned to both the business and its employees alike. With face-to-face virtual meetings taking place, employers can save money on office space and essentials while workers save on their commute by operating from home – meanwhile, the quality of the technology ensures that productivity continues to flow.

In September 2020, Facebook outlined its intentions for the tech giant’s future relationship with augmented reality and immersive collaboration.

Firstly, the company announced the planned launch of Ray-Ban smart glasses in 2021 via a strategic partnership with EssilorLuxottica – the brand that owns the Ray-Ban brand. While the details are hazy to date, it appears that Facebook are looking to prioritize wearability alongside innovative technology in a bid to create smart glasses that support traditional eyewear designs while also protecting eye health and help relieve digital eye strain, which is often caused by using computers a lot.

Although Facebook CEO Mark Zuckerberg stated that the smart glasses are “not yet AR glasses but they’re on the way there,” the eyewear themselves are set to be a vital stepping stone on the path to user-friendly augmented reality eyewear.

Facebook’s move to incorporate Ray-Ban’s iconic design into its planned smart glasses release is significant to businesses and customers alike. It represents a step away from the old days of bulky and uncomfortable headsets and towards a brave new world of aesthetics and usability that should not only pave the way for more adoption but facilitate longer-term usage – especially throughout the working day.

It’s perhaps no coincidence that Facebook has also made it clear that the company’s focused on revolutionizing the future of work with the release of a new enterprise edition of Quest 2 and new Oculus for Business resources. Facebook also previewed the ‘Infinite Office’ features that the company plans to launch to enable productivity on the Quest platform.

Zuckerberg has already hosted management team meetings entirely in virtual reality, and he believes that AR and VR alike have the potential to be the “most social platforms ever, and we’re really just scratching the surface.”

Facebook already supports enterprise VR use cases with Oculus for business, which offers features like fleet management and enterprise-level support. The platform offers business-oriented ways of logging into the Quest headset through the use of workplace accounts, for instance. The software is also built on Workplace, Facebook’s enterprise collaboration platform.

Although Facebook’s next generation of smart glasses are set to be the most fashionable to enter the market over the coming months, the social networking giant clearly intends to incorporate future generations of smart eyewear into its VR and AR enterprise collaboration technology. With the potential that AR smart glasses hold for collaboration in the age of WFH, it’s reasonable to expect Facebook to pile more resources into its integrated eyewear as the decade progresses.

While Facebook is playing a slightly longer game in terms of facilitating remote office environments with its AR smart glasses, this isn’t to say that powerful collaborative AR meeting technology isn’t already out there and thriving for its enterprise adopters.

The co-founders of Spatial – an AR-base virtual collaboration tool – say that they want to create the Google Docs of augmented reality. Their idea is simply to create a virtual space where groups of people can meet and collaborate on projects. The tool works on multiple existing hardware, like the Oculus Quest VR headset, Microsoft’s HoloLens and the Magic Leap One among others with both iOS and Android versions under development. 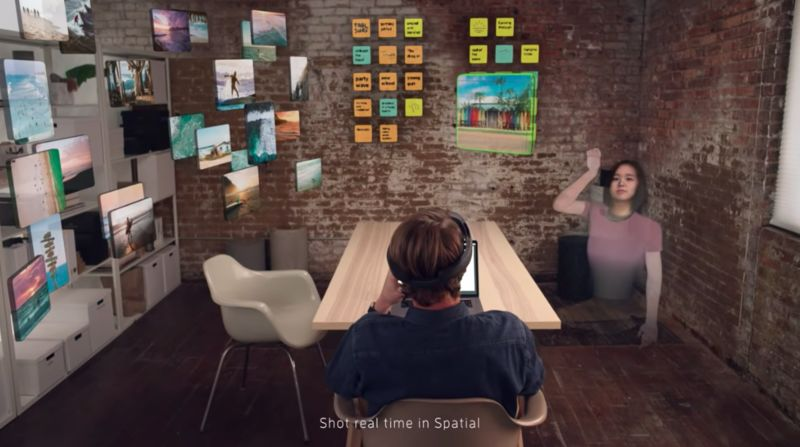 Users can sign up to the Spatial app by supplying a single photo of their face. The app then springs into action creating a machine learning-inspired digital 3D model of the user. These avatars represent each user from the waist up, meaning it’s possible to make gestures using arms and hands thanks to embedded hand-tracking technology. Spatial also taps into AI to help animate the facial expressions of avatars based on what’s being said.

Once users create their avatar, they’re free to join rooms in a similar way to that of Zoom calls and interact with the avatars of their friends or colleagues. It’s possible to talk to them and see versions of their real faces. It’s even possible to move around rooms, watch videos together, share information, and even high-five each other.

Spatial provides us with an invaluable glimpse into what the office of the future may look like. While many businesses have made the transition from physical offices to WFH, there are still gaps that can be filled by AR technology and combinations of machine learning and AI. While video conferencing is an effective way to collaborate with colleagues, users are confined to the view of their cameras – making the sharing of information difficult and the process of reading body language harder.

The AR smart glasses of the future will be capable of building on the progress of both Facebook in terms of design and Spatial in terms of functionality – enabling workers to interact with colleagues and employers as if they were in a room and sharing documents first-hand – all while saving on their collective commutes and the use of office space.

While the pandemic has certainly been a disruptive influence on the world of business, its’ forcing of businesses to adapt faster to WFH conditions may prove to be a key money saver over time for many companies.

Dmytro is a founder of Solvid, a creative copywriting and inbound marketing agency in London, UK. He’s also the founder of Pridicto, an AI-based software startup that allows users to forecast web traffic and set visual aims. His work has been featured in numerous publications, including TechRadar,… View full profile ›