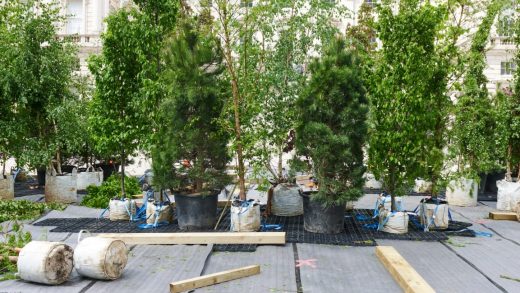 How to build an urban forest from scratch

When artist and stage designer Es Devlin was researching the space that was to be the centerpiece of the latest edition of the London Design Biennale for which she is artistic director, one bit of the historic record jumped out. The setting was to be the large courtyard of Somerset House, a large 18th-century building in the center of London. Its primary architect, William Chambers, decreed that, as part of the design, no tree could ever be planted in Somerset House’s expansive open space, thereby disrupting the classical forms and symmetry of the building.

“So that was like a red rag to a bull,” says Philip Jaffa. He’s the founder of London-based landscape architecture firm Scape Design, which was brought in by Devlin to raise a 425-tree, forest-sized middle finger to Chambers’s mandate.

The result is Forest for Change, a temporary forest of 425 trees plopped right into the center of Somerset House’s courtyard. Designed to highlight the importance of trees in addressing climate change, and display placards defining the United Nation’s 17 Global Goals for Sustainable Development, such as ending poverty and taking urgent action on the climate, the installation juxtaposes the trees with the manicured city around it and suggests a better integration of natural elements in our built world.

Sponsored by the nonprofit Project Everyone, which was cofounded by filmmaker Richard Curtis and focuses on communicating the United Nation’s goals, the project has been in the works for about two years, and was delayed by the pandemic from its intended opening date in September 2020. After a four-week run, it will close on Sunday, and the trees used for the installation will be distributed to some of London’s least tree-lined boroughs, schools, and charities supporting children.

Even without an anti-tree policy, creating a forest on the grounds of Somerset House, or anywhere, is a challenge.

“The first thing is, well how do you design a forest? Humans don’t design forests. We design woodlands for production, usually one species of trees in mass forests for chopping down wood,” Jaffa says. “Nature creates forests, not people.”

Originally, the idea for the project was to recreate what a native forest would look like in England, but the realities of globalization and changing forestry practices quashed that concept. “Effectively that would be trees that were here 2,000 years ago. There aren’t that many of them,” Jaffa says. After some deliberation, it was decided that the tree installation would need to reflect the need for trees around the world, particularly in cities, and using nursery-grown trees that have been bred specifically to endure the conditions of city environments. “It’s an urban forest,” he says.

Along with Devlin, Jaffa laid out a rough plan for where the trees could go, how they’d be intersected by walking paths, and where large Stonehenge-link placards representing the 17 Sustainable Development Goals would be situated. “The story for me was, ‘let’s create a beautiful forest with a mythical clearing in the middle,’” Jaffa says. “You walk through a path network experiencing the forest, and all of a sudden you come upon the goals.”

To create that mystery, and to lend a sense of what it’s actually like to be in a dense, unplanned, natural forest, Jaffa focused on creating a variety of tree densities. Some areas were more open, and planted with what Jaffa calls “lollipop” trees, which have a canopy that starts typically above the height of most people. Other areas had dense plantings of multi-stemmed trees like birches and feather-shaped trees like Scots pines that have foliage running all the way down near the ground. Each aged around 10 to 12 years, the juvenile trees have various heights and most reach between 13 and 20 feet.

Of course none of these trees is meant to stay in this one place for long. To accommodate the short timeframe of the installation, Jaffa used only container-grown trees that were strapped into a large grid system that’s typically used to hold the plantings on green roofs. About 3,000 ground cover shrubs were added in, and the entire forest floor was covered in 15 tons of bark.

Forest for Change has had some criticism. The architecture critic for the Observer newspaper says it’s just another example of “a wish to put trees where they don’t really want to be.” The piece has also gotten some blowback over its similarity to a 2019 temporary forest artwork that was installed in the center of an Austrian soccer stadium by artist Klaus Littmann, who calls Forest for Change “an imitation.” Devlin has rejected that claim.

The trees themselves haven’t had an easy go either. Just before they left the tree nursery in April, a cold spell gave them frost damage. Later, after they were installed in London, they were hit by a heat wave. Jaffa says the weather-related issues are just another way the installation is telling a story about the threats of climate change.

The pandemic-related delay of the installation caused its own challenges. Jaffa says he wasn’t able to go to the tree nursery to select the trees for the project until February, a time of year when most trees are less than picturesque. “I didn’t see a leaf on a tree from February until six weeks before the show. So that was the bit that made me the most nervous,” Jaffa says. “Even for me as someone who’s been working with plants and trees for 30 years, it’s still hard to imagine what each one is going to look like and how they’ll all sit together.”

But since the installation, Jaffa says the forest has worked well. He has been invited to give talks to local school children about forests and ecology, and musician Brian Eno offered to collaborate with Devlin on the project by piping into the forest his recordings of bird songs from around the world.

Jaffa says the most important part of the project will be its legacy, as the 425 trees are planted in London schools and communities. He’s hoping the installation’s eventual dispersion will help more people understand the value trees bring to cities, and to inspire more appreciation for the trees we have, whether they’re in a dense natural forest or providing some shade on a busy urban street. “The overarching message for me,” Jaffa says, “is no tree is a bad tree.” 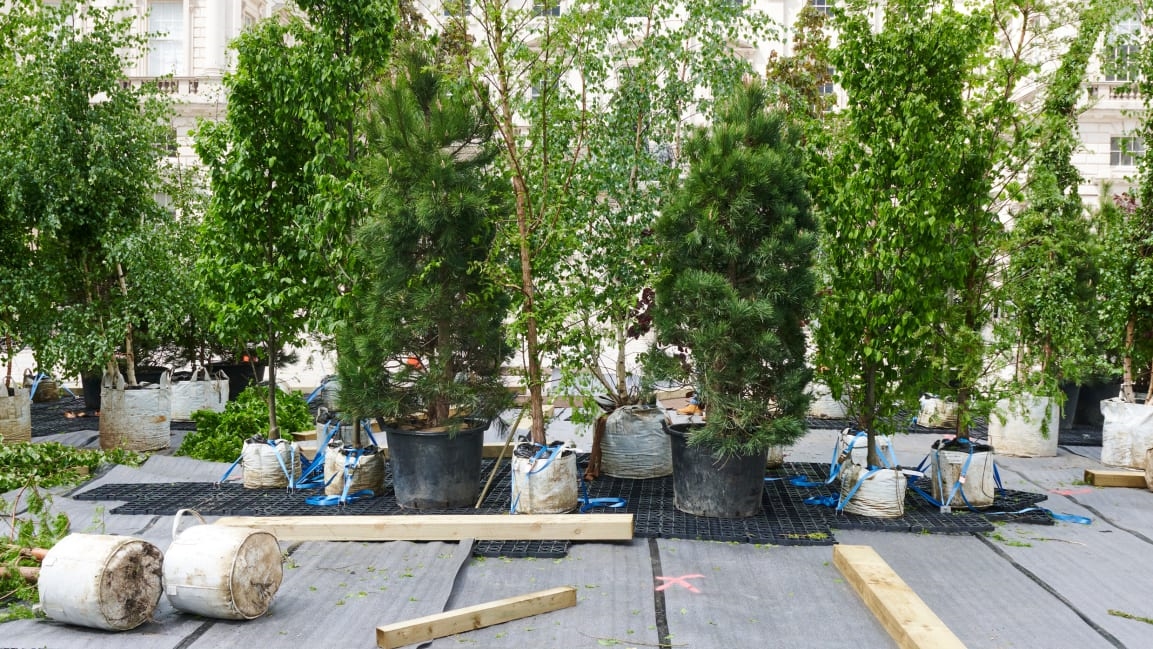