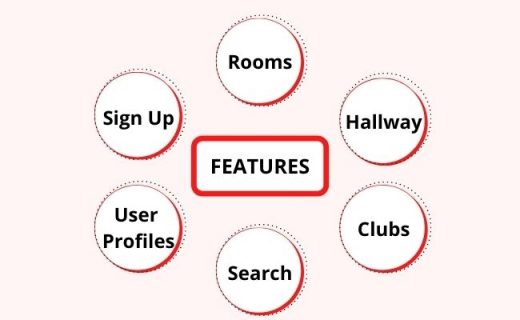 How to Develop a Clubhouse Clone App? – A Comprehensive Guide to Build an Audio Based App

How to Develop a Clubhouse Clone App? – A Comprehensive Guide to Build an Audio Based App 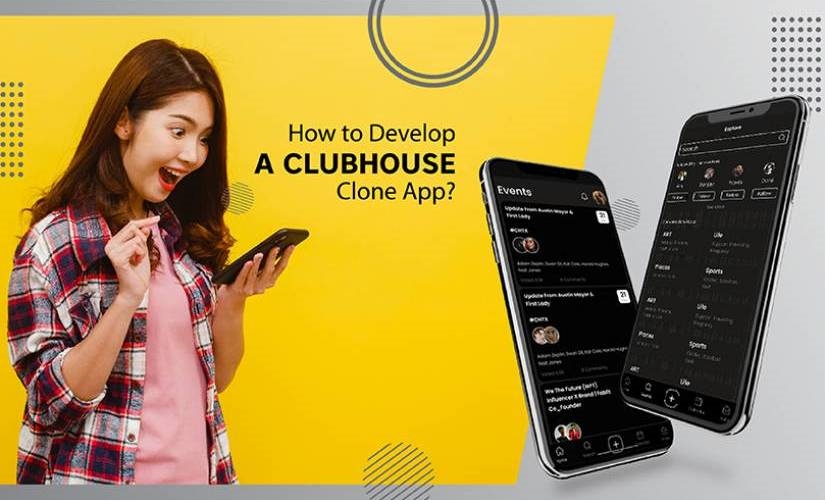 All social media apps have formed their own identities, and let’s face the truth: The apps all feel the same at this point. This led to the birth of a new app designed solely to break the wheel and reinvent it.

The Clubhouse is a social media app that lets users finally experience a breath of fresh air in the social media app market. By bearing in mind to differ from the rest, the app focuses on all aspects of social media interaction that haven’t been implemented in the way it was meant to be. The Clubhouse has everything it needs to keep users curious about it, and we’ll discuss what exactly makes it pop out from the dull, monotonous media market.

Clubhouse, in simple terms, is an exclusive audio-based social media app (appdupedotcom). The app focuses on audio-based interaction and content creation that is available to a very selective audience. The platform allows users to participate in chat rooms, join or host in a new room of their liking.

The apps’ users have to be invited by their contacts. This feature might initially pose a problem, but it promotes exclusivity for the app. The app has over 8 million downloads, and the number continues to increase, which is surprising considering the app is invite-only. Let’s understand how the app became so popular in such a short period. 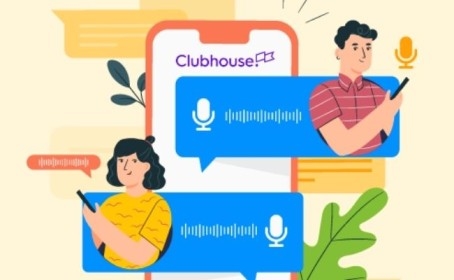 Why is Clubhouse turning heads?

The main reasons why Clubhouse got popular will be its exclusivity and audio content support implementation. The app is currently available only on iOS, so only Apple users have access to the app, further signifying its exclusivity. In addition, the app focuses on the immediate availability of audio content hosted that will be difficult or impossible to access later on. So the factor of urgency makes users stay on the app so that users won’t miss anything of value.

Several influencers and experts of various industries have made the app much more rewarding to use. In addition, the value of tech communities and start-ups from where such influencers arise would become famous and successful due to the exposure. It’s a win-win for both the general users of Clubhouse and the influencers alike.

How to use Clubhouse?

The app only runs on the iOS platform, so it is necessary to have an Apple device to download the app. Once the user downloads the app, they have two options to gain access to the app.

To register on the app, users have two options:

An existing Clubhouse user has to invite another Apple user to register to the app. Besides the new user feeling special about their invitation to an elite Club, the app also gains users interested in different content, further diversifying the user base and influencing content creators to be unique.

The waiting list is for new user to register their username and wait until their friends who use Apple devices are notified. Then, any of the contacts can add them to the Clubhouse from there.

After registering, the user can either join an ongoing room or host their room. For example, several influencers would be hosting rooms relevant to their niche, which users can join, but will be muted through the duration of the host’s audio conference or stream. 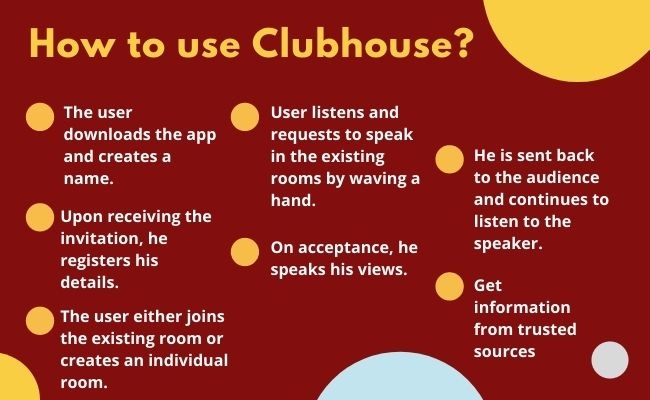 How Clubhouse slowly becomes a powerhouse of social media platforms

The Clubhouse was launched in May 2020, during the strictest lockdown protocols that were followed worldwide. The app started on one platform, with an invite-only social media platform. So it’s surprising that the app has farmed over 8 million users almost one year later and is still operating only on one platform, iOS. This stat is a remarkable feat no matter the app’s nature, especially an audio-centric social media app.

With the growing number of mobile social media users, this number will grow in the upcoming months and hold its own identity as the best audio-based social media platform, unless you have a better implementation and plan for a similar app idea.

The massive success of Clubhouse did not go unnoticed. That is an understatement, as it got even the social media industry leaders like Zuckerberg interested in it. As a result, the Facebook CEO is implementing some features of Clubhouse into Facebook and Instagram as well. Likewise, Twitter followed Zuckerberg’s lead to a plan to incorporate some elements of Clubhouse as it would make its platform more diverse and fun.

Instagram has now added live streaming features with up to three more people, which was earlier only 1. This addition opens up a new realm of possibilities for influencers to gain a wider audience and host interactive sessions with fans.

Twitter has created a “Twitter space” feature that allows users to join an ongoing discussion, much like the rooms in Clubhouse. It will also contain hand gestures like raising hands, applauding, and more. It is no doubt that Clubhouse is the new standard of social media interaction, and it has nearly no competition in its field.

Steps to get started on your Clubhouse Clone

To any app development and business, there need to be proper measures for the app not to be another trend that dies off.

There are more than a few factors to figure out before stepping into development. First, the app that will be developed needs to cater to the audience that will enjoy using it. Finding the target audience, the demographic, and how they will interact with the app is crucial before further steps are taken towards developing the app.

Surveys, forms, focus groups, etc., can be used to find out these details.

The app can be free to use or be pay-to-use. While almost all social media is free to use, it is entirely acceptable to charge a fee for using the app. The app can also earn through advertisements.

The right team cuts costs and offers a pleasant experience while working with them and saving time. The business owner can be suggestive of changes while the process is going on, and the results will be worth the time and money invested in 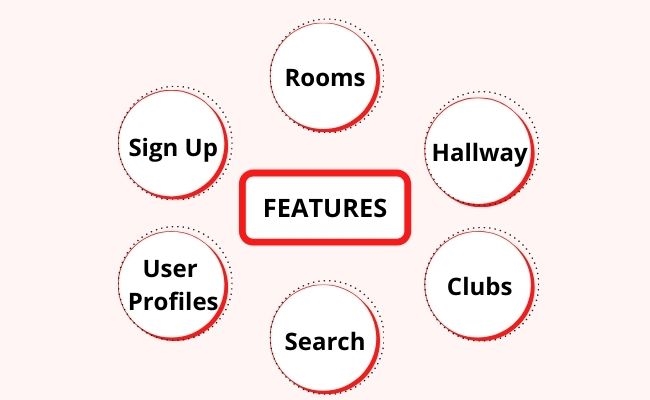 The boons of an audio-based social media platform

Audio-based social media has an increased percentage of traffic that is more inclined to continue using the app’s service.

Users can stay more engaged and involved in the app, as the rooms, once closed, won’t be available to visit again. In addition, the sessions are all real-time, so users will feel missing out if they are not on the app for too long.

Users can connect with other users more efficiently with fewer fingers, images, GIFs, etc. In addition, people can talk to each other instead of text, opening more opportunities for businesses, influencers, and industry professionals.

With an audio-centric platform and invite-only features, users will feel more sophisticated when part of the app. In addition, the app will feel more elite and exclusive due to interacting with influencers directly, rather than feeling left out when watching them through a screen.

How to develop the perfect Clubhouse Clone app for your business?

Partnering with a company or team

This is the simplest method, but it costs relatively more time and effort than other ways of building your app. The company appoints a team of developers to work on your project, which will be discussed in detail, and go through these five iterations of development until it is ready to take over the market:

Buying a clone app is the fastest and most often the best course of action to build an app for your business. There are brilliant white-label apps that pack all the bells and whistles of the original app, and more features are added and customized to your liking. There are clone app solutions that are highly robust, versatile, and dependable for your business needs.

Hiring a team from scratch

This method costs more time and resources and requires the business owner to play the project manager’s role until the app is ready. Every aspect of the app, such as technology stack, scalability, and features, will be developed by the team from the ground up. The business/app owner covers running and maintaining the servers, testing, and additional costs.

The advantages would include the owner keeping track of progress, staying up to date with the project details, and rectifying mistakes quickly.

How much would it cost to develop a Clubhouse Clone?

The cost of app development is generally high under normal circumstances. Still, some factors heavily influence the cost of development, and they can be researched and reduced to an extent based on the options available. Here are some factors to consider to reduce the cost without compromising on the quality of the app build.

The Clubhouse has only started its journey in the social media game. The app will continue to grow, ushering the new field of audio-based social media to grow more, inviting new competition. So create your Clubhouse clone app that rivals the originals in functionality and performance.

Get ahead of the curve, take advantage of the full customization options with the Clubhouse clone script, and be the industry’s next face-or voice.

Image Credit: All images provided by the author; Thank you!

The post How to Develop a Clubhouse Clone App? – A Comprehensive Guide to Build an Audio Based App appeared first on ReadWrite.

Jennifer is an America-based chief technical writer at Appdupe, who has got the buzz of every faddish development in the technology and app development sector. Her verdict about presenting quick-witted solutions to the current issues and being enigmatic about future trends has led her to become the wizard in her field.