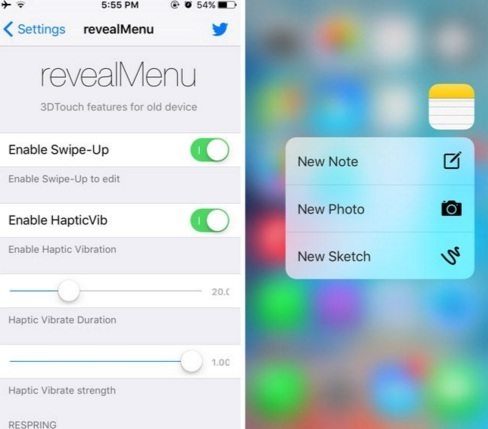 3D Touch, the coolest feature in iOS devices that was first introduced with the Apple Watch is being liked by all, and then Apple brought it to iPhones starting with iPhone 6S and 6s Plus. This feature allows the users to register around three levels of pressure where a hard press on the app icon will summon a new Quick Action menu, hold down on photos, link, and email in the messages will peek at the content quickly and hold down harder for popping up the content in place.

From the very popular Straya Dev Team, Forcy is the most helpful tweak that let the users of older devices enjoy the Quick actions menus as they long press on the icon on home screen. But before that make sure your device is jailbroken and is updated with iOS 9. Once the device is jailbroken, next job is to install this tweak from Cydia. This is available for free, so you do not have to spend single money for that.

After installing forcy, the next job is to enable it from the settings app. So head towards settings and scroll down to find the tweak. Enable it by toggling the green switch. Normally the quick action menu is brought by swiping up on the app icon but it can be changed to long press as well if you want. For that, enable the ‘swap invoke method’ on the same screen. However, in case, there is a need to delete or edit any apps on the home screen that is to be done through the swiping up gesture only.

Haptic feedback is another option in the Forcy tweak that will create vibration as you use the Quick action feature. So, it is best to turn off that option if you do not want vibration.

Once all the needed options are enabled, just swipe up or long press on the app icon on the home screen and it will bring the Quickly Actions menus. But again you need to ensure that the app for which you are using the feature supports 3D Touch feature.

This is another useful tweak by iMokhles to enjoy the 3D like feature in your older iOS devices.

RevealMenu resembles a lot with Forcy while it allows users to experience the peek and pop capability as well along with the Quick Actions menu. Here also you can enable the haptic feedback option that let you customize the duration and force of the vibration.

Apart from the above you can also install HOPP’N & Peek-a-Boo that is equipped with the similar features and help you to take advantage of the Quick Actions menus in your older iPhone, iPad and iPod Touch.

The post How to Get 3D Touch on Older iPhone / iPad / iPod Touch Devices appeared first on MobiPicker.