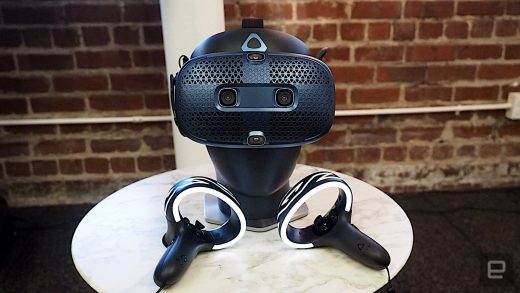 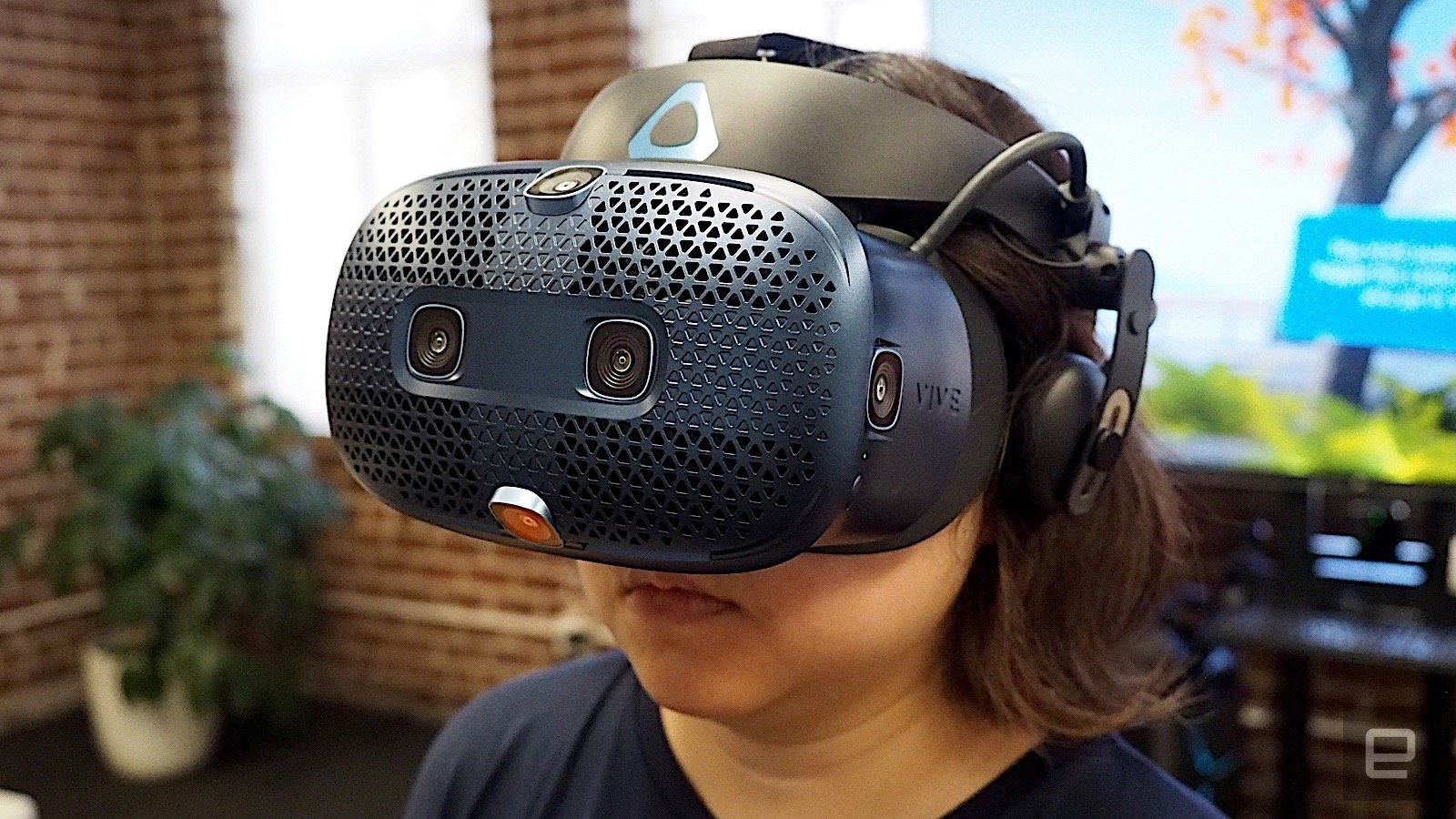 In 2016, HTC revealed the Vive VR headset to the world. In the years since, HTC has released several versions, like the Vive Pro, Vive Pro Eye and the standalone Vive Focus and Vive Focus Plus (for developers and businesses). Now it’s ready to launch a brand-new headset aimed at consumers: the Vive Cosmos. It costs $699, which includes a trial subscription to Viveport Infinity; you’ll get a 12-month trial if you pre-order before October 3rd, and a six-month one thereafter (The VR game service is usually $99 a year).

In a demo at HTC’s San Francisco office, I tried out the original Vive and the new Vive Cosmos, one after another, and it was stunning just how different the two headsets are. The overall ergonomics on the Cosmos are vastly improved. Putting it on is way easier, for example. While the original had different head-straps, the new headset uses a simpler halo-style system similar to the one on the Pro and PS VR, with an adjustable hard plastic backing and a single velcro strap on the top. An HTC employee slipped it on my head like a backward baseball cap, and with just a couple tweaks, I was ready to go. Comparatively, the Cosmos also feels a lot lighter.

What I really appreciate is that the Cosmos’ goggles were configured to better fit a wider range of face shapes. For example, even though HTC said you could wear glasses with the original Vive, I always thought it was uncomfortable to do so — mine would press against my eyes. With the new Cosmos, this was no problem at all; there was much more room. As with a lot of other headsets, there’s also an IPD dial — the one on the Cosmos is located on the right side — which lets you adjust the distance between the lenses. And thanks to the overall padding, it felt snug but not tight. I felt like I could definitely wear it for hours on end. 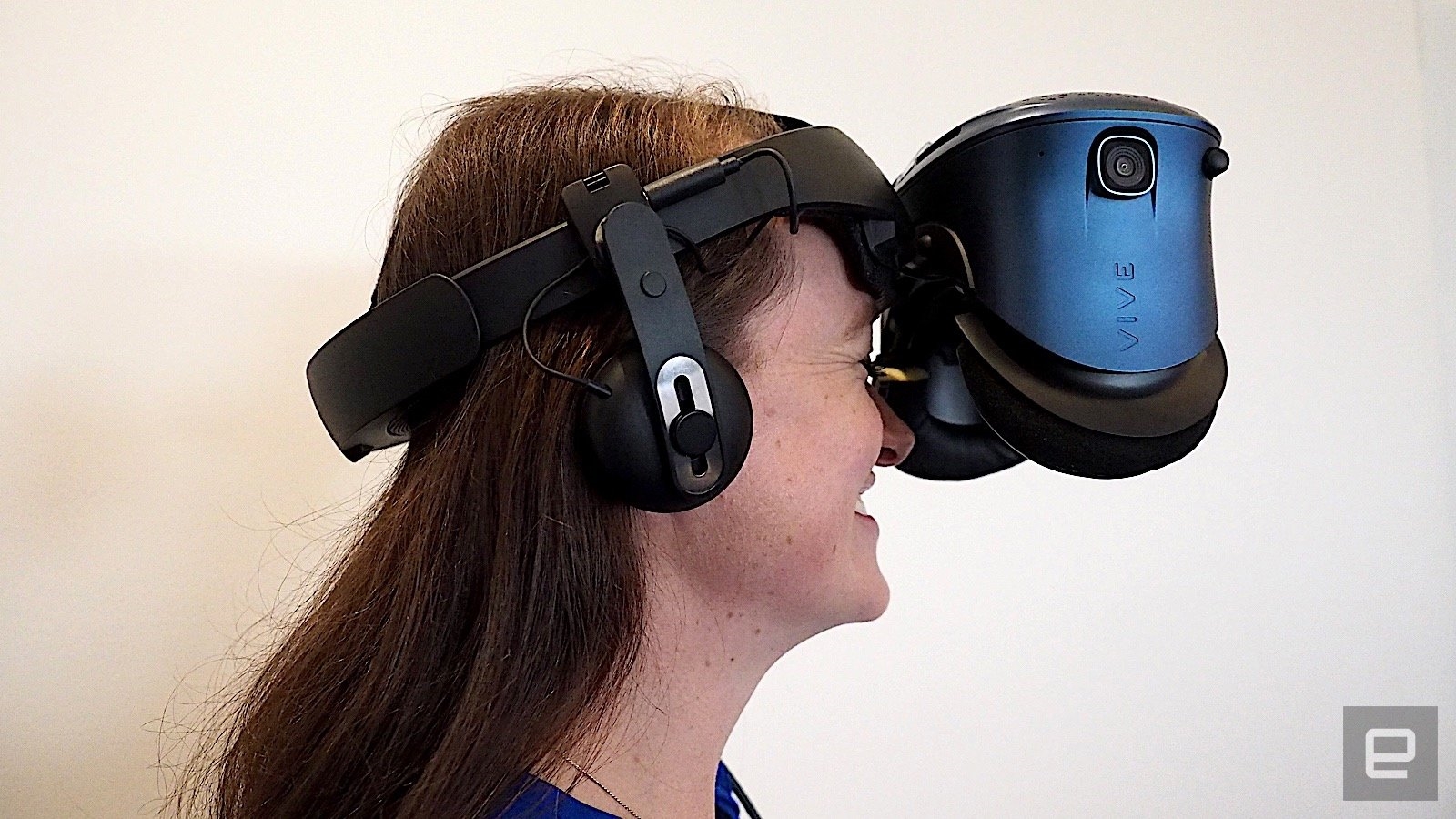 Another big difference is that the eye area of the Cosmos actually flips up, so you can get back to “real” reality much quicker. While this sounds good in theory, I didn’t like it in practice. When you flip the goggles up, the whole headset feels off-balance and front-heavy, as if it was about to slip off. The HTC representative said this was likely due to the slickness of my hair; the rear did not have as much grip on my head. I hardly think people with straight, long hair is a rarity, however, so I found this answer to be less than satisfactory.

If you want to see what’s going on around you but you don’t want to flip up the headset, there is an alternative. The Vive Cosmos has an integrated passthrough camera that lets you see what’s around you without touching the headset. To enable it, either step outside of the digital boundaries (basically, step outside the virtual gridded wall) or double-tap the Vive button on the controller. The result is a terribly blurry view of your surroundings — in my case, a living room in HTC’s San Francisco office.

It was so blurry that I could barely make out people’s faces. O’Brien admits that it’s not very good at the moment. “It’s quite primitive, now, yes,” he said. The reason that it’s so bad, however, is that Cosmos uses the same cameras for tracking and passthrough functions, and HTC decided to prioritize low latency over resolution to ensure responsive tracking. “But we intend to improve that over time,” he added. That said, it was at least a quick way to jump in and out of VR if you needed to in a pinch. 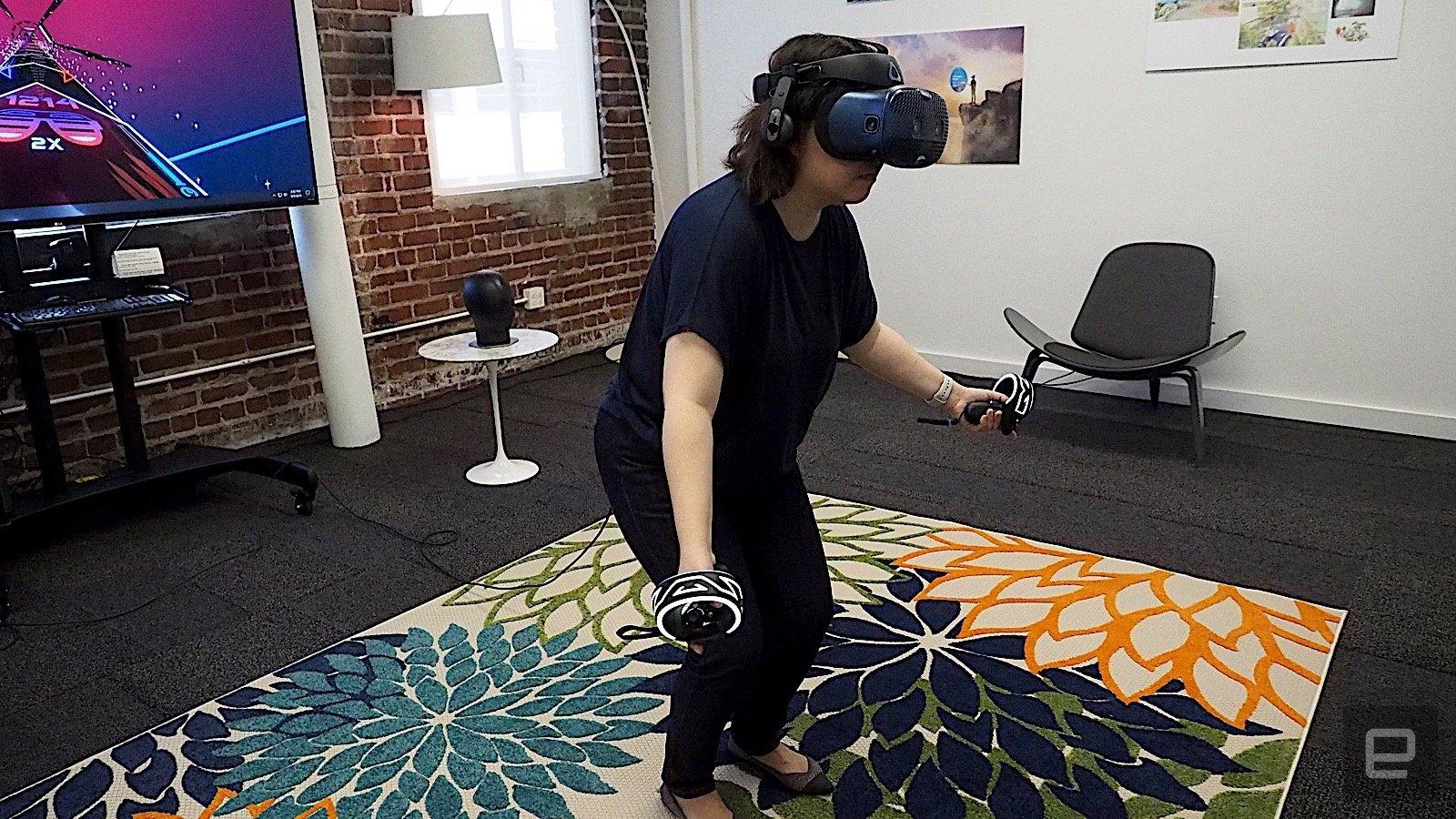 That blurriness stands in stark contrast to the VR display inside the Cosmos. With all-new RGB LCD panels, a combined 2,880 x 1,700-pixel resolution (that’s an 88 percent increase over the original), a 110-degree field-of-view and a 90Hz refresh rate, the result is the best VR display I’ve ever seen. With the original Vive headset, for example, the blue whale in the well-known Wevr: TheBlu demo looked huge and lifelike. With the Cosmos, however, it was much more so, making the whole experience even more immersive. It really did feel like the whale was right there next to me. I could see details I didn’t see before, like wrinkles around its eyes and warts and imperfections on its skin. The colors also looked richer and more saturated; the blue was deeper and the shadows were darker and more nuanced.

One of the marquee features of the Vive Cosmos is that it has inside-out tracking. Six cameras on the headset allow it to track your movements without the need for external sensors. This worked quite well when I was trying out various applications. In Museum of Other Realities, in which I interacted with several exhibits in a virtual art museum, I could dive deep inside sculptures and move my head and body around without any noticeable limitations. Similarly, in a dance rhythm game called Audio Trip, I was able to move my hands and arms to the beat with hardly any lag. It was accurate at detecting the location of my hands and feet.

Additionally, the Cosmos features a new set of 6dof (six-degrees of freedom) controllers that are built to be used with inside-out tracking. Instead of wands, they look similar to the controls on the Oculus Rift, with the circular sensor loops, albeit with a slightly different configuration — the buttons are inside the loop instead of on top of the loop. Each controller has a grip button, a couple of trigger buttons, and now, analog joysticks (which have replaced the touchpads). HTC also included A, B, X and Y buttons, which should be familiar to anyone who’s held an Xbox controller. 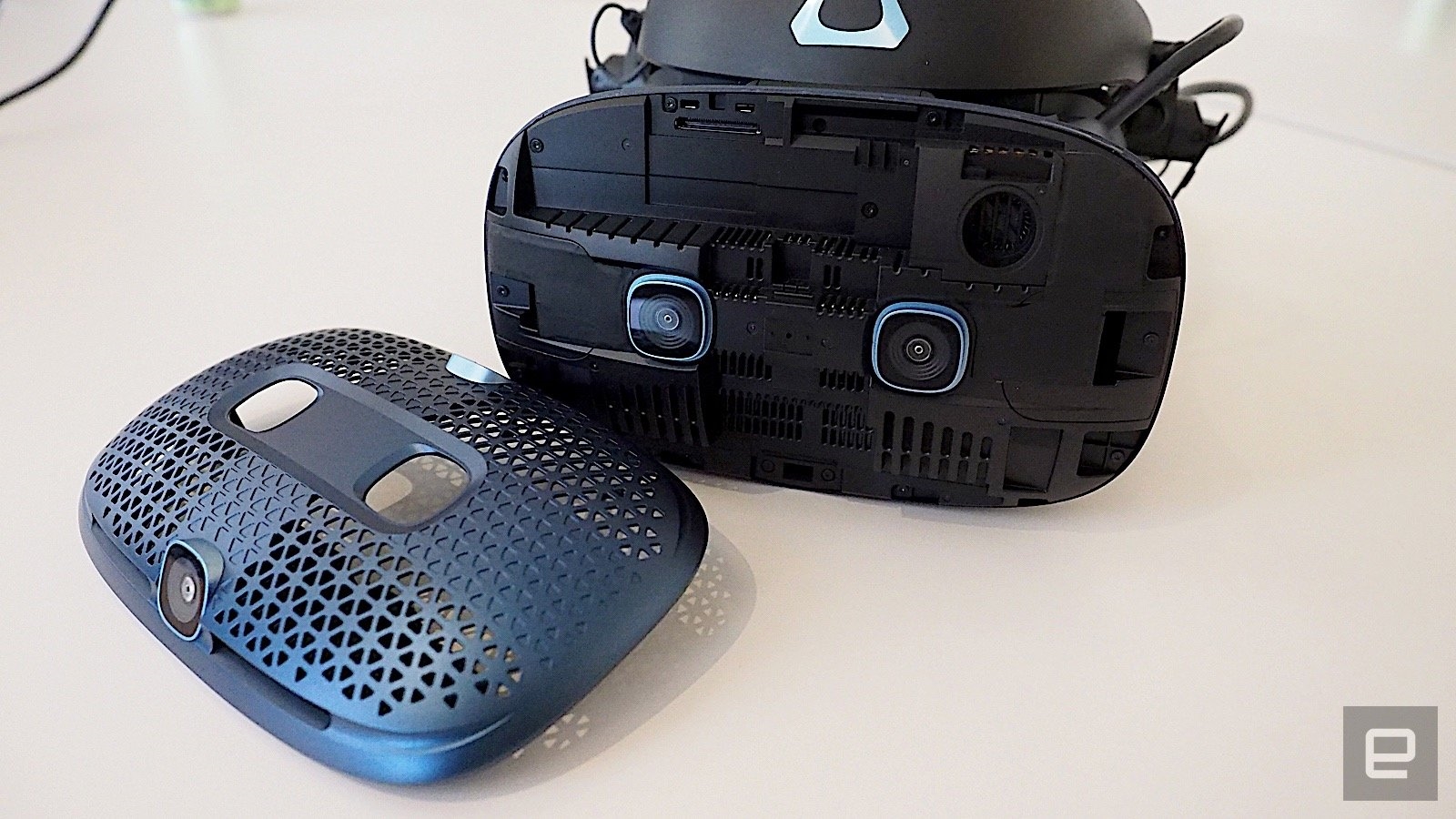 In a departure from other VR headsets, the Vive Cosmos also features modular faceplates. The idea is that over time HTC will release faceplates that add functionality. At launch, HTC will release the Vive Cosmos External Tracking mod faceplate, which lets you use the Vive Cosmos with HTC’s Lighthouse base stations. By itself, the Cosmos offers only 310-degree tracking of the room (which is still pretty good), but with the addition of the External Tracking faceplate and the extra sensors, you’ll be able to get 360-degree tracking of the whole room. This mod supports Vive’s ecosystem of peripherals such as the Vive Tracker as well. It’ll be available starting next year.

Aside from the hardware, the other big feature of the Cosmos is that it’s the first HTC VR headset to ship with the Vive Reality System rather than SteamVR. The Vive Reality System is a new software experience for the platform that comes complete with a redesigned user interface called Lens for browsing apps and settings. 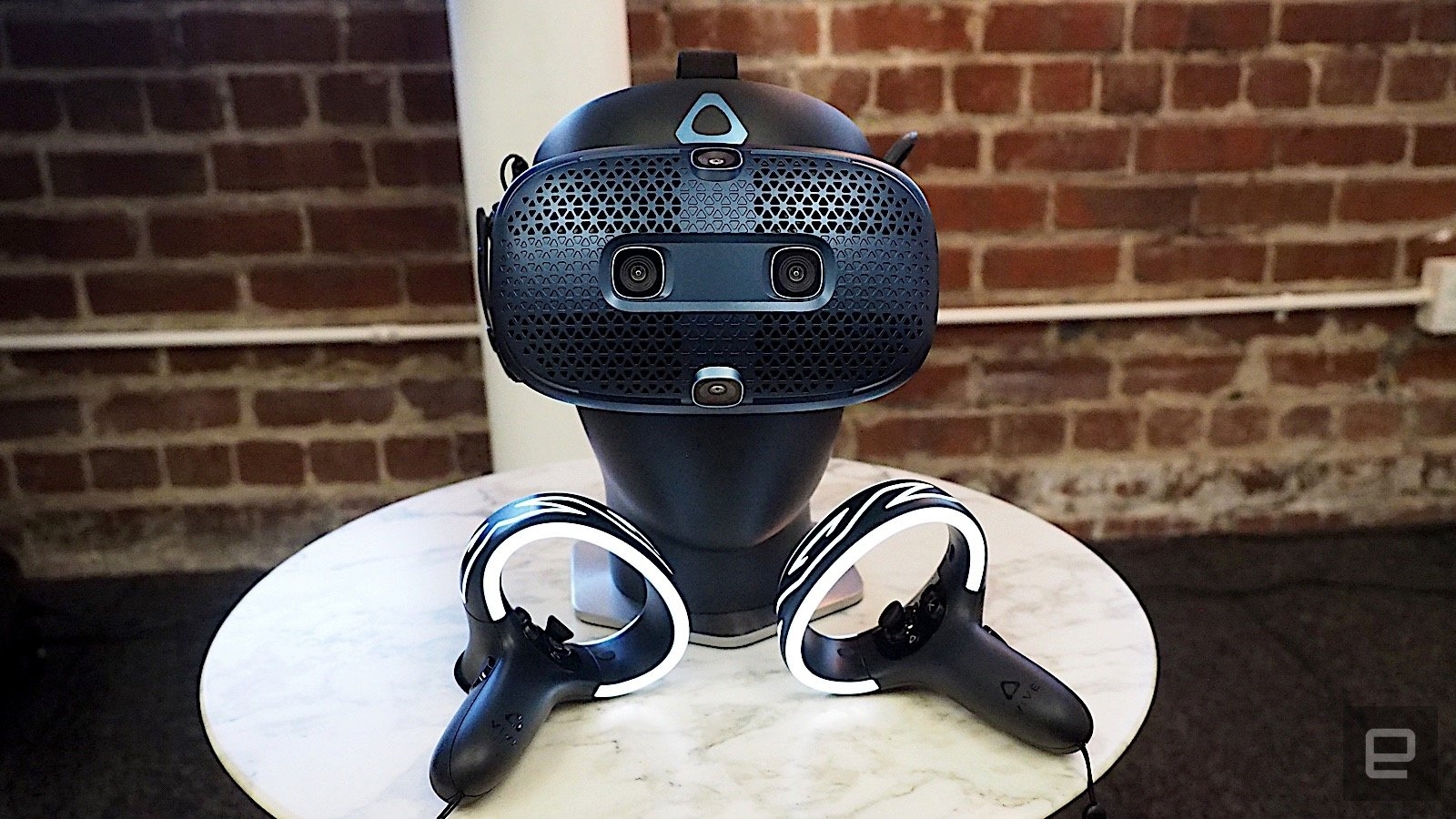 There’s also a new “home” screen called Origin, which acts as a welcome launchpad of sorts. When you first fire up the Cosmos, the Origin area enters into a tutorial mode. An HTC spokesperson said this is especially useful for those who are new to VR and will help them familiarize themselves with different apps and experiences. For example, from playing around in Origins, I learned how to teleport to different locations, drive a remote-controlled car and change my virtual environment.

Even with the best hardware and software in the world, a VR headset is meaningless without content. That’s why HTC decided to bundle in a trial subscription to Viveport Infinity, HTC’s unlimited game service, along with the headset. The subscription typically costs around $12.99 a month, or $99 a year. If you preorder the Cosmos from now until October 3rd, you’ll get a 12-month redeem code or a six-month one thereafter. Seeing as a VR app can cost anywhere from $10 to $30 on its own, that’s a pretty good deal.

The Vive Cosmos will launch globally on October 3rd, but you can preorder it starting today.

As hinted at earlier this year, the Cosmos is a vastly improved headset compared to the original. It features flip-up goggles, inside-out tracking, a modular faceplate, brand new controllers and the highest-res VR display on the market. Like the Vive Pro, it also has integrated headphones, but the ones on the Cosmos can be unplugged and swapped out for your own set of cans if you prefer.

It’s worth noting that the Vive Cosmos is not a standalone headset; it still needs to be tethered to a PC. “I think there’s a place for both PC and standalone experiences,” said Dan O’Brien, president of HTC Vive in North America. “Mobile has made great strides over the years, but for right now, the problems that we can solve and the experiences we can deliver are just so much more powerful on the PC. The PC will always be up there.” HTC does offer a Vive Wireless Adapter, which lets you untether from the PC, but it costs around $300 each.