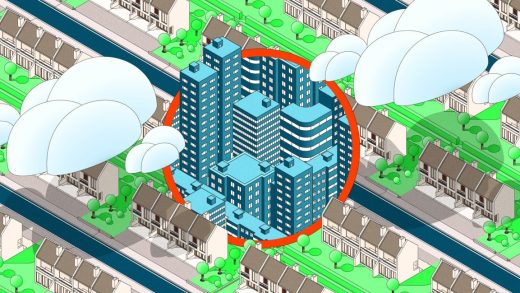 If COVID-19 pushes people to the suburbs, how can we make them more environmentally friendly?

Four miles from downtown Austin is a suburb that doesn’t much resemble the 1950s archetype of big family houses behind white-picket fences, wide streets, and endless sprawl. Instead, Mueller, Texas, is a modern, mixed-use, equitable, eco-conscious community, built on the lot of an old decommissioned airport, comprised of a mix of solar-ready single homes and apartment blocks, shops, restaurants, offices, a 30-acre park and jogging trails, a museum and an open-air amphitheater, and the highest number of electric cars per capita in the country. It’s described as “an alternative to land-consumptive and automobile-dependent development patterns throughout the region.”

It’d be forgivable to confuse Mueller with a city center. In the time of COVID-19, when people are moving out of major cities to more affordable, spacious suburbs, urbanites may have to use Mueller, and other areas like it, as examples of how to “citify” suburbs, both to improve their quality of life and to drive down their energy use and carbon emissions. Suburbs are responsible for about 50% of all residential carbon emissions in the U.S., mainly due to frequent and long-distance car rides. Suburban living conserves less energy than urban living, because big, detached houses take longer to heat and cool and lose energy more quickly, and they use more water for yard maintenance.

Even with those environmental drawbacks, suburban living might become more common, as some city dwellers opt to trade in their shoebox apartments for yard space, especially when remote work and distance learning keep the whole family in the house. There’s also an “epidemiological reason” not to be close to others, says Daniel Safarik, editor in chief at the Council on Tall Buildings and Urban Habitat, a resource for sustainable urban design.  The “urban proposition”—of frequenting favorite bars and restaurants, walking to friends’ apartments, or grabbing nearby coffee with clients—is becoming less attractive to some, and less worth the high cost. The pandemic may be accelerating migration decisions people had originally planned to put off for a few years.

The trend doesn’t apply across all U.S. cities: According to a report by online real estate lister Zillow, home sales patterns across most American cities mirror those of past years. But in New York and San Francisco, list prices have dropped by 4.2% and 4.9% year over year, respectively. Single-family home sales in Sonoma and Marin Counties, on the outskirts of San Francisco, were up 36% from last year, and in Napa up 28%. In New York, there’s been a 44% increase in home sales in surrounding suburbs from last year, including 112% in Westchester County. Between March and June, 16,000 New Yorkers switched to Connecticut addresses.

It matters that this trend is hitting America’s two densest big cities. When it comes to sustainable cities, “size matters,” wrote urban theorist Richard Florida, meaning that as city populations rise, those cities work better for the environment. When you factor in the carbon footprint of public transit over driving and apartment living versus single-family-home energy use, Manhattan is one of the greenest places in America. In 2009, public policy magazine City Journal ran a study estimating that an average New York City resident emits 4,462 pounds less of transportation-related carbon dioxide than an average New York suburbanite. A 2014 Berkeley study warned that, while population-dense cities emit the fewest greenhouse gases, their sprawling suburbs cancel out all that hard work. “While the most populous metropolitan areas tend to have the lowest carbon footprint centers, they also tend to have the most extensive high-carbon footprint suburbs,” wrote coauthor Christopher Jones.

As we face a climate turning point for which our post-COVID-19 behaviors are especially crucial, it’s important that higher-income individuals who move outward live in an eco-friendly way, especially when many essential and lower-wage workers must stay in cities and, often, climate hotspots. “COVID-19 has illustrated a sad truism: We may all be in the same boat, but we all do not have the same paddles,” Daniel Kammen, the other Berkeley study author, wrote in an email to Fast Company. Affluent individuals in New York and San Francisco have the financial means to insulate themselves from climate risks, such as wildfires and unsafe air, by working from home and relocating, he explained. “Multiple properties, often larger suburban and rural homes, and longer delivery chains all mean that individual emissions of the affluent rise when they take the extra precautions they can afford.”

Suburbanites-to-be can make some choices to be more environmentally friendly, says Ellen Dunham-Jones, an architect and the director of the Urban Design program at Georgia Tech, starting with electing to live in “missing middle” housing, so-called for being a happy medium between huge McMansion-sized single-family homes and high-rise apartment blocks (which are often called Texas doughnuts for how the huge complexes wrap around interior parking). Missing middle homes are usually townhouses, structured as duplexes or quadplexes, meaning two or four homes fill the space of what would otherwise be one house. Smaller in size, missing middle homes have less space to heat and cool, and they share walls, which conserves more energy. Residents can then save even more energy, Dunham-Jones says, if they “insulate the hell out of it.”

Suburban dwellers can make greener transport decisions by opting for alternative modes of transport. Pre-pandemic, American households made an average of 9.4 car trips per day, 46% of which were a bikeable distance of three miles or fewer, and 21% of which were a walkable distance of one mile or less. They can also aim to reduce their online deliveries, which are likely higher during the pandemic, and clump them together in fewer deliveries to increase efficiency.

But in many cases, residents are limited by their surroundings. Cities and municipalities have to implement more progressive zoning and transport policies that allow for these practices, and also repurpose existing structures. New regulations could encourage housing to be built on underused lots or dead retail spaces rather than extending sprawl, and allow for more mixed-use zones—not separating residential and commercial—to create more pedestrian-friendly developments. Municipalities could embrace form-based zoning, Dunham-Jones says, which was implemented in Miami’s overhaul and considers the building’s form before its use, prioritizing a community feel above all else.

If suburbs had less sprawl and more bike lanes, sidewalks, and trails, they’d allow more opportunity for zero- or low-carbon trips. Better proximity could also entice companies that offer micromobility options, such as electric scooters, which need a dense enough population to make entering a market feasible. Just as some cities such as Paris intend to create 15-minute neighborhoods (where every necessary amenity is at most a 15-minute bike ride away), there’s potential for the “15-minute suburb,” says Safarik. Even in Austin’s Mueller community, a paragon for suburban redesign, there’s potential for improvement; though it’s an electric car haven, the city has voted down public transit efforts for many years.

Even current roads could be reconfigured to be more environmentally friendly through “road diets,” says Dunham-Jones, when traditionally wide roads are slimmed down to make way for bigger sidewalks and bike lanes. Maplewood, Minnesota, did this to reduce large amounts of polluting runoff from the roads into the lakes and creeks, and it simultaneously decreased dangerous car speeds and increased alternative modes of transport.

These changes would increase the suburban quality of life, too, by making these areas more community-oriented, which may be appealing for younger, millennial families who seem to be leading the migratory charge. “I think that a lot of these urban migrants are still looking for that sharing lifestyle,” Dunham-Jones says. “They liked having a park to go to, instead of having a lawn to have to mow.” That community feel could come through cottage courts, a form of missing middle housing first popularized in the Pacific Northwest, which can fit as many as 16 dwellings on an acre. In these developments, homes usually center around a communal garden (the homes in Oklahoma’s Carlton Landing encircle a shared fire pit), to create a sense of togetherness. The yards are typically visible from each home’s porch, so parents can watch children while they play with others. To some families, that may be preferable to their children playing alone in their backyards, especially as we all battle social isolation during the pandemic. “As we go tele-everything, that’s only likely to get worse,” she says.

It’s important that the incoming migrants are a younger demographic, because a culture change will be key to transforming the suburbs from the old, ’50s image to a new, sustainable model. Older retirees have the time to attend community meetings, and they have the impulse to preserve their communities from redevelopment that threatens to encroach on their space. “From that perspective,” Dunham-Jones says, “every single new person that wants to move in is a threat.” In cities, more people conversely means more amenities, better-running transit, and more sustainable living. Millennials can infuse this mentality into the suburbs.

These proposed changes actually used to be the norm before incomes rose and houses got bigger. Showing residents what new layouts would mean for their quality of life could even get veteran suburbanites on board. “Tell a suburban resident that you want to build a corner store down the street and their mind races to images of a horrible 7-11 and the decline of their property values,” wrote urban design researcher Kasey Klimes. “Take them to an old German village with this exact configuration, and they’ll fall beside themselves with how beautiful, quaint, and lovely it all is.” Safinik agrees: “I think it would actually support the idyllic image that people want to have of suburbs, which has largely been wiped out by eight-lane highways and giant parking lots.”

Dunham-Jones is also optimistic that this current influx of younger families could be the tipping point for sustainable suburbs—even if the long-term trend is cut short if the pandemic soon ends. The fundamental model of American settlements won’t be upended—cities won’t go anywhere, and nor will suburbs—but, she adds, “I think having urbanites move to the suburbs is going to fuel some of these changes.” 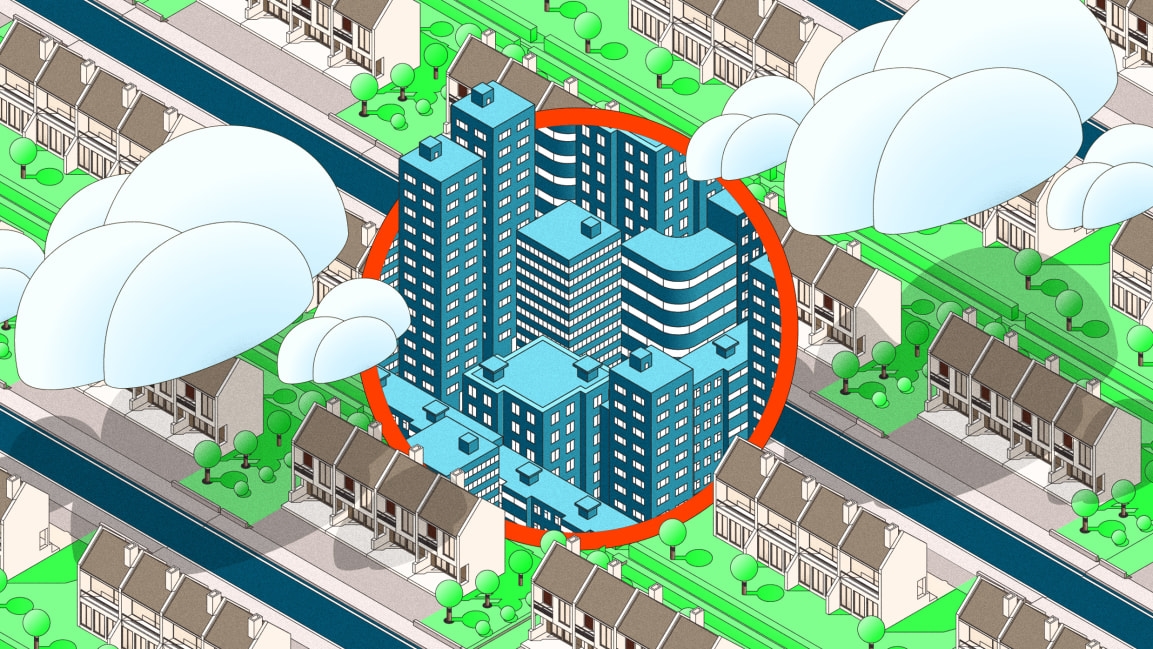