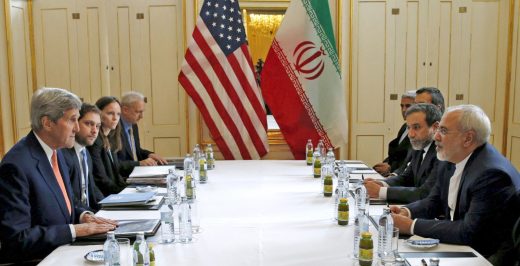 In nuclear politics, one size doesn’t fit all

No one wants to use nuclear weapons. Even President Harry S. Truman, the only leader in history to actually order and carry out a nuclear strike, was hesitant to use the United States’ atomic arsenal after witnessing the power of the bombs first-hand. 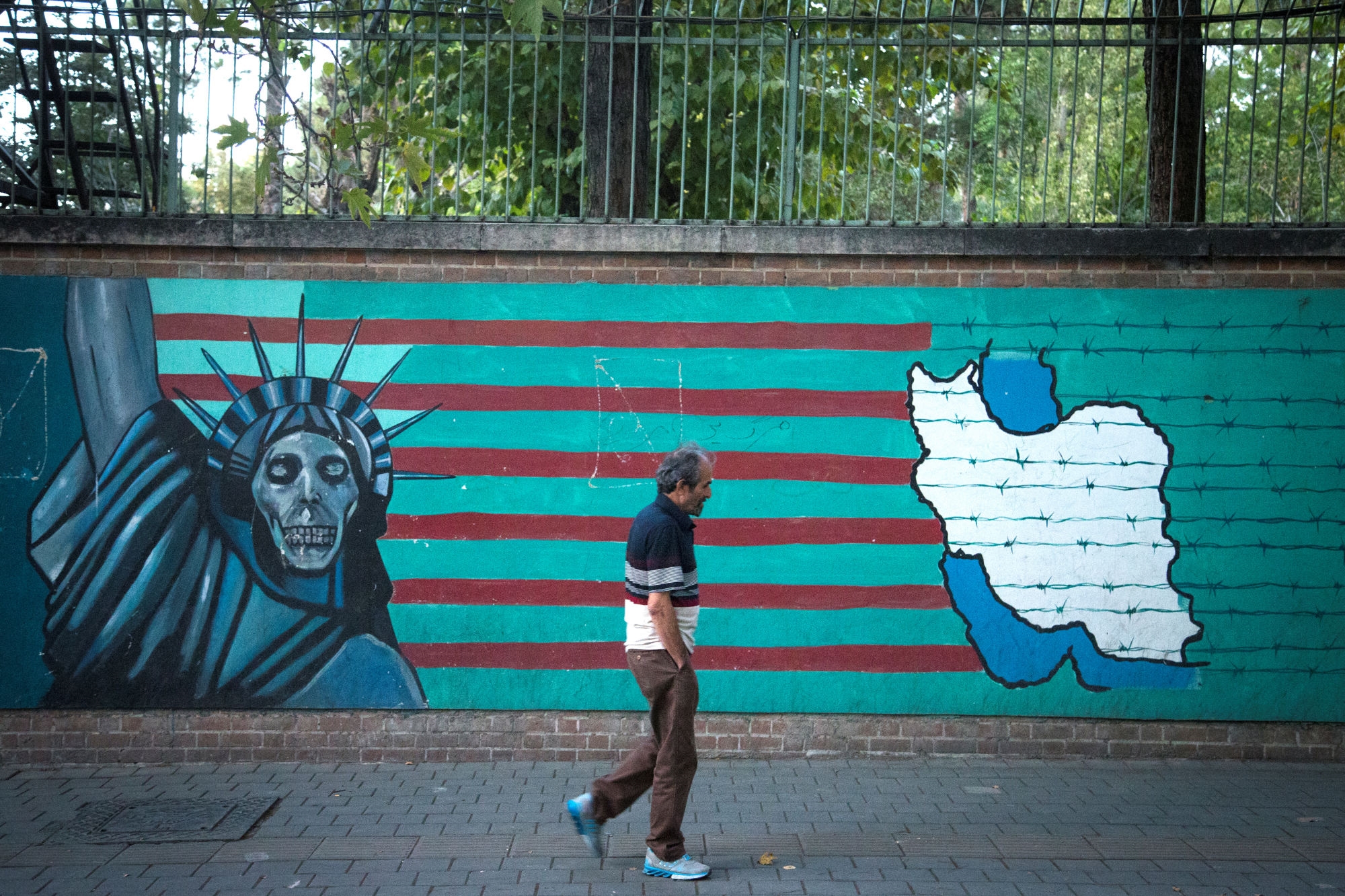 “We have discovered the most terrible bomb in the history of the world. It may be the fire destruction prophesied in the Euphrates Valley Era, after Noah and his fabulous Ark. … This weapon is to be used against Japan between now and August 10th. I have told the Sec. of War, Mr. Stimson, to use it so that military objectives and soldiers and sailors are the target and not women and children.”

Nagasaki, before and after the nuclear strike

That was the idea behind the 2015 Joint Comprehensive Plan of Action, otherwise known as the Iran nuclear deal. Iran has flirted with nuclear technology and covert weapons programs since the 1970s, when it ratified the Non-Proliferation Treaty alongside the US, Russia, the UK and 40 other regions. Despite signing on to the world’s most binding agreement to halt the creation of nuclear weapons, Iran (and many other countries, including the US and Russia) secretly continued developing its warhead programs.

Hidden enrichment and testing facilities have been found buried in Iranian mountains and other remote locations since 2002. In January of this year, Israeli Prime Minister Benjamin Netanyahu revealed a trove of seized documents that proved Iran had been actively working on nuclear weapons before 2016. Pulitzer Prize-winning journalist and nuclear historian Richard Rhodes examined some of the assets earlier this year. 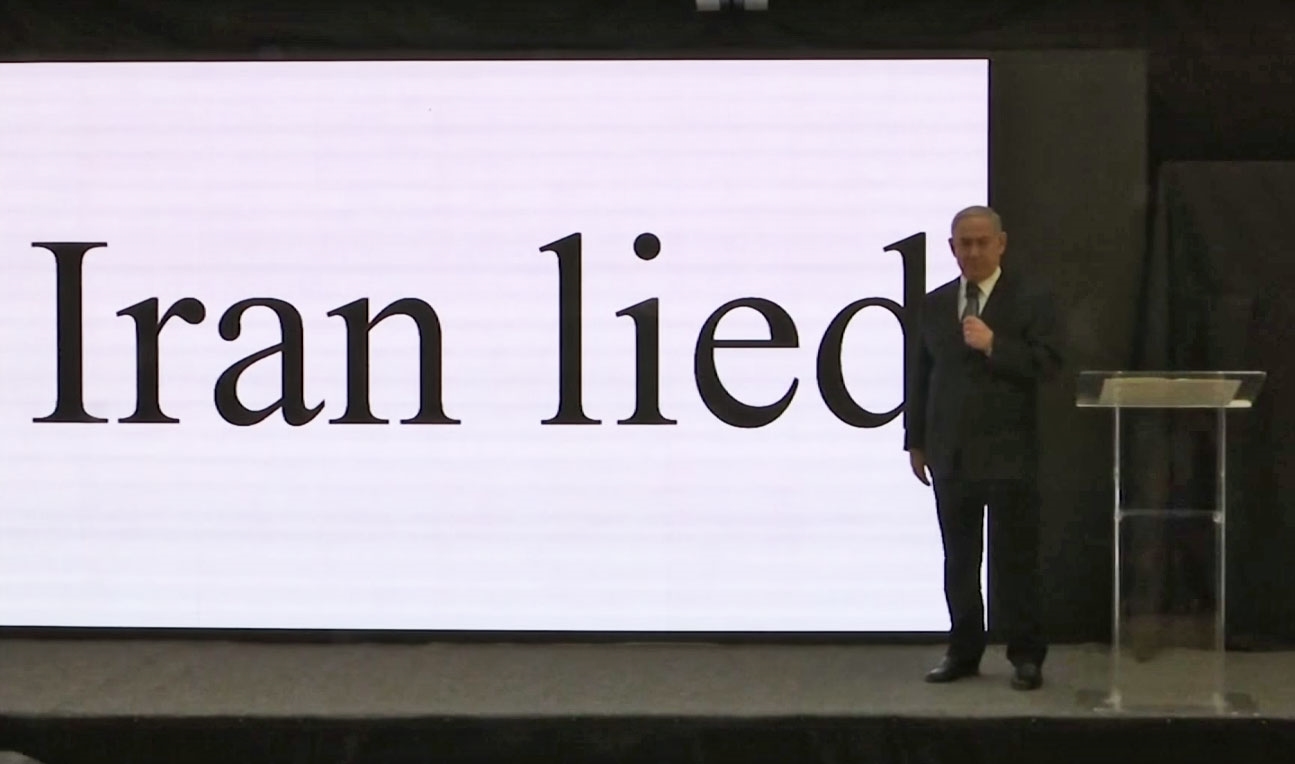 “One of the photographs that I found really interesting was of the device that was used to do testing of the explosives’ implosion designs,” Rhodes said. “They were pretty clearly working on what everyone works on these days. That was their first bomb, a plutonium-fueled bomb with cells of high explosives around the core. It’s kind of the only way to go anymore.”

The nuclear bomb dropped on Hiroshima was a uranium gun-type bomb, a model that requires a significant amount of enriched uranium and uses a hair-trigger firing mechanism. “No one’s ever wanted to waste that much uranium since then,” Rhodes said. Modern nuclear weapons more closely resemble the bomb used in Nagasaki — an implosion-type plutonium warhead. Implosion-type bombs have a fissile core (generally enriched plutonium) surrounded by an explosive lens, producing a more powerful and stable explosion. That’s the type of technology Iran was working on, according to Netanyahu’s stolen documents.

Working with the United Nations and International Atomic Energy Agency, the US and other countries imposed sanctions on Iran in 2006, restricting trade and demanding it halt its nuclear programs. In the midst of this stagnant international tension, Hassan Rouhani was elected president of Iran in 2013. US President Barack Obama and Rouhani spoke on the phone in September of that year, marking the first direct contact between the countries’ leaders since 1979. Rouhani was ready to talk.

Years of high-profile meetings and strained negotiations followed. Finally, on July 14th, 2015, Iran, the US and other prominent states struck a deal that would see Iran shut down most of its 19,000 nuclear centrifuges and agree to enrich uranium for use only in nuclear power plants, not weapons, over the next 10 years. Iran opened its nuclear sites to regular inspections by the IAEA and promised to decrease its reserves of enriched uranium. In return, Western countries dropped sanctions against Iran. 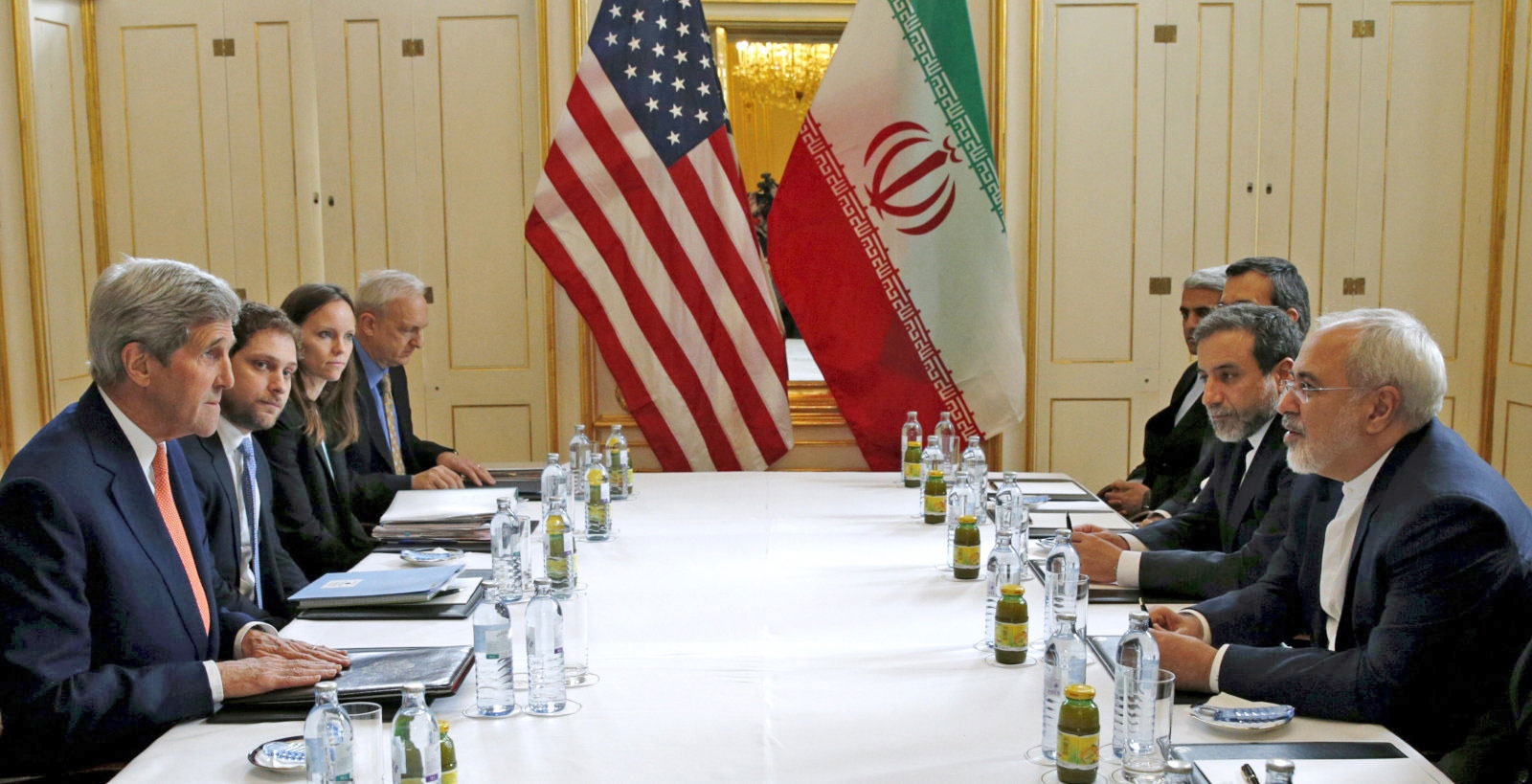 “That was really an amazing piece of work, to convince a country that still has a kind of divided government with lots of different power players in different corners, [to send] all its plutonium and enriched uranium out of the country, set aside what was very obviously a bomb program,” Rhodes said.

Iran has adhered to the terms of the nuclear deal since its formal implementation in January 2016. IAEA inspectors have repeatedly approved Iran’s facilities and there have been no more rumblings of secret enrichment programs buried in the country’s mountains and valleys. Even the documents seized by Israeli spies early this year couldn’t find any violations since 2016.

And then, in May 2018, the US withdrew from the Iran nuclear deal. President Donald Trump disparaged the Joint Comprehensive Plan of Action during his 2016 campaign and beyond, calling it “one of the worst and most one-sided transactions the United States has ever entered into.” Pulling out of the deal shook the fragile atomic peace that had just started to settle over Iran and its neighbors, opening the door once again for an arms race in the Middle East and further straining relations between Iran and Israel, the latter of which has an estimated arsenal of 80 nukes.

Iran vowed to honor the deal, as did the remaining signatories.

This week, Trump and Rouhani volleyed a series of angry messages at each other. Over the weekend, Rouhani warned the US that “war with Iran is the mother of all wars,” and Trump responded in an all-caps tweet threatening that Iran would “suffer consequences the likes of which few throughout history have ever suffered before.”

To Iranian President Rouhani: NEVER, EVER THREATEN THE UNITED STATES AGAIN OR YOU WILL SUFFER CONSEQUENCES THE LIKES OF WHICH FEW THROUGHOUT HISTORY HAVE EVER SUFFERED BEFORE. WE ARE NO LONGER A COUNTRY THAT WILL STAND FOR YOUR DEMENTED WORDS OF VIOLENCE & DEATH. BE CAUTIOUS!

Trump’s approach to Iran is reminiscent of his dealings with North Korea, a nation with a suspected nuclear stockpile of 15 warheads. After months of back-and-forth posturing, name-calling and blatant missile tests out of North Korea, Trump and North Korean leader Kim Jong-un met in Singapore this June and left with a more cordial attitude toward each other. After decades of isolation, North Korea had the ear of the most powerful nation in the world.

This is precisely how nuclear weapons are used in contemporary politics. They are non-lethal tools of negotiation, forcing world leaders to pay attention to any country that claims to be ramping up its arsenal. Kim knows that brandishing his nuclear capabilities is the quickest way to be taken seriously if he wants access to global trade and economic channels, if he wants a seat at the international table, or if he wants sanctions against his country to be lifted. Remember — no one actually wants to use nuclear weapons. Not even Kim Jong-un.

“We have really not moved an inch in terms of North Korea, except in one way we have: We’re just not screaming at them now,” Rhodes said. “Trump has gone home claiming a victory, which is pretty amusing. Nothing much has changed from the North’s side. But they may have bought Mr. Kim a little breathing room to do what he needs to do with his country and try to improve the life of his people, which is really tricky when you’re running the kind of brutal dictatorship that he runs.”

There’s one major difference between the North Korean and Iranian nuclear situations, however. North Korea has a handful of nuclear weapons and in the run-up to the meeting with Trump, it was loudly testing rockets and bragging about its ability to strike the US mainland. It was demanding recognition. Iran, on the other hand, had been reducing its nuclear capabilities and cooperating with international agencies.

“If we assume that [Trump] is initiating a process something like what happened with North Korea, then I presume there’s going to be posturing back and forth until — but I just can’t see the Iranians doing what Kim Jong-un did,” Rhodes said. “He was all primed and ready. That’s what he wanted to do. But I don’t think they do. And yet, even now, as they’re posturing back and forth, the Iranians keep sending signals that they’re still willing to negotiate and discuss all this.”

Iran didn’t want Trump’s attention; it already had the sanctions relief it was looking for. Trump’s attack on Iran’s nuclear policy could end up undermining the JCPOA altogether, resulting in the exact opposite of Trump’s stated goal to rid Iran, and the rest of the Middle East, of nukes.

Iran already knows how to build a nuclear bomb, and that knowledge isn’t going anywhere. Even with the IAEA breathing down its neck, Iran could build a warhead within a year, perhaps less, Rhodes said.

“[Iran] could certainly go nuclear,” he said. “They could do it pretty fast. … One more nuclear power in the Middle East will start a cascade that would mean, oh, Saudi Arabia certainly could finish the job of going nuclear, as it seems to have started by supporting the Pakistanis in their effort. That’s such a volatile part of the world that it’s really difficult to imagine more and countries in the Middle East acquiring nuclear weapons. It would really, really increase the risk all around.”

The most dangerous nuclear theater, according to most experts, lies between India and Pakistan. “The people I’ve talked to who are in the nuclear business all say that that’s the most frightening situation in the world today, just because there’s such an intense animosity between the two countries and constant probes back and forth by government-supported terrorist groups on both sides. It’s just extremely volatile,” Rhodes told Engadget in 2017.

India has an estimated 135 nuclear weapons and Pakistan has 145, though neither country can launch a bomb on a whim — the warheads are disassembled and stored in separate locations. The US, meanwhile, has 6,550 nuclear bombs, and it’s capable of launching one in as few as five minutes, based on a single order from the president.

No one wants to use nuclear weapons. Not Pakistan and India, and certainly not Iran. Not even the US — at least for now.

“If we’d use nuclear weapons against Iran, the fallout would just destroy half the Middle East,” Rhodes said. “It’s not as if we could drop one or two and that would be the end of it. Forgetting all the other terrible consequences of just the world’s horror at such a terrible thing being done again after all these years, I can’t see us doing that. I can’t even see Trump doing that, given the fact that he has some sane people around him still.”

The first strike on Hiroshima, Japan, killed 80,000 people and injured 70,000. The bomb was a uranium-based gun-type model and it scorched the earth bare. A second strike followed three days later on the city of Nagasaki, killing 40,000 people and injuring 60,000. In both attacks, most of the victims were civilians.

Truman ordered the first strike. It’s unclear if he asked for the second one or if military leaders took the initiative themselves — but it is obvious that Truman stopped a third strike in its tracks. When the president received a memo with plans for a third nuclear attack in Japan, he responded immediately with a note scrawled directly on that message, reading, “It is not to be released over Japan without express authority from the President.”

There hasn’t been another hostile nuclear strike. Today, there are an estimated 15,000 atomic warheads in the world, with more than 90 percent of those owned by the US and Russia. Nine countries are known to have nuclear weapons: the US, Russia, the United Kingdom, India, Pakistan, France, Israel, China and North Korea. International treaties and agreements over the decades have attempted to curtail the growth of existing nuclear stockpiles and prevent new programs from going live.