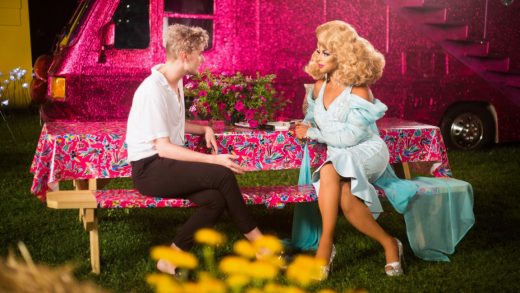 If anyone knows how to spin straw into golden opportunities, it’s Shangela Laquifa Wadley.

Shangela (aka Darius Jeremy “DJ” Pierce) was the first queen to be eliminated on season two of RuPaul’s Drag Race. Given the fact that drag was nowhere near the mainstream at the time (not to mention being the first contestant asked to sashay away), it would’ve been understandable if she faded into the background.

But Shangela is standing right in the spotlight—and she knows her angles.

Since her multiple appearances on Drag Race (competing in both season three and All-Stars season 3) Shangela has been a fixture in TV and film, most notably starring in A Star is Born, the Riverdale spin-off Katy Keene, and HBO’s newest show We’re Here. Add to that brand deals with Orbitz, Facebook, and McDonald’s; a feature on Ariana Grande’s track “NASA”; performing in front of Beyoncé (and getting a standing ovation); and a business managing and booking other drag queens.

Shangela is definitely holding true to her viral hit “Werqin’ Girl.” She is a professional.

“People ask me what’s the formula for being successful after Drag Race? Drag Race is not a magic wand. It doesn’t make you into a person who has work ethic,” Shangela says. “If you were that way going into the show, you’ll hopefully be that way coming out of it and try to make the best of it.”

Shangela explains how a TGI Fridays Halloween party shaped her destiny, the hustle and grit you don’t see behind the glitz of drag (including a shattered leg), and why her career is now coming full circle.

Growing up in Paris, Texas, Shangela got a master class in work ethic from an early age. Her mom was a single parent and a military veteran working two to three jobs at a time, and her grandfather was a farmer.

“We didn’t grow up with a lot of money, but I knew one day I wanted to have some money and I wanted to travel,” Shangela says. “I knew that if I wanted those things, I was going to have to work.”

With a degree in corporate communications from Southern Methodist University, Shangela landed a job right out of college in 2003 at TGI Fridays headquarters in Dallas. As part of the PR department, it was her job to coordinate a Halloween party for employees. But, being the showgirl that she is, Shangela turned it into more of a pageant, which she won (of course), dressed as Michael Jackson performing Justin Timberlake’s “Sexy Back,” remixed to “Bringing Scary Back.”

“Not only did I get dressed in costume, but I also got some people from the different departments to be backup dancers for me,” she says. “I did a whole production.”

It was at this party that the former CEO of TGI Fridays, Richard Snead, took notice of Shangela who, at that point, had been with the company for two years.

“He said to me, privately, ‘We love you here at the company, but if you ever wanted to pursue being an entertainer, and that’s something you’re serious about, you should go to Hollywood now,’” Shangela says.

Snead even offered her freelance work at the company’s former sister restaurant Pick Up Stix in Los Angeles.

Shangela did, in fact, take Snead up on his offer. She packed up her Ford Explorer, headed West, and dove head first into drag.

The only sad part for Shangela, however, is never getting a chance show Snead how far she came. He died of cancer in 2016.

“I wanted to reach out to him and say, ‘Richard, look where I am! And thank you so much!’” Shangela says. “I never got to do that.”

Half truths and a whole lotta talent

She had cut her teeth working as a drag queen in Los Angeles and made it to the pinnacle of her profession: RuPaul’s Drag Race. However, she was the first queen on her season to get the boot. It’s an embarrassing position no one in any competition wants to be in.

But Shangela had a plan.

Filming of the show took place in the summer of 2009 with the cast reveal in November. Knowing what position she landed in, as well as the fact that the show wouldn’t air until February 2010, Shangela had a window of time to take advantage of the show’s strict rules that cast members not reveal anything about the show until it airs.

“I was like, ‘Shangie, let’s put this business mindset to work. I need to get these bookings,’” she says. “So I started calling clubs and sometimes I’d even change my voice on the phone, like, ‘Hi, this is Shangela’s manager.’ Or I’d email from manager@Shangela.com.”‘

Naturally, club promoters wanted to know how well she did on the show.

“And I would say, ‘Well, we’re not really allowed to say, but I’m going to tell you this, baby—you know me. You know how I turn the party? What do you think?’ And they’d be like, ‘Oh my God—you’re winning, aren’t you?” Shangela says. “So I had all these bookings lined up. And when the show came out and I was the first one to go home, they couldn’t cancel my contract. I already have 50% of the deposit!”

Putting herself in that position meant she would need prove that she was more than a last-place contestant.

“I knew that my job was then to show them that I was an entertainer, that I could host on the microphone, I could give you different looks,” Shangela says. “That’s when drag really became my full-time job.”

Then, only three years later, she almost lost it all.

A death drop from grace

While performing—ironically enough—at a Halloween-themed drag night at a New York City club, Shangela went for a death drop, a signature move in the drag and ballroom scenes where you fall to the ground with one leg bent and the other stretched out.

It’s a move she’s done countless times before, but on that night she wound up breaking her tibia and fibula.

“I have a titanium rod in my right leg and two screws in the knee and two in the ankle to this day,” she says.

It’s a devastating injury for anyone, most of all a performer who’s known for dancing. Not to mention, Shangela’s injury came in the middle of a busy touring schedule, which her drag mother and fellow Drag Race alumna Alyssa Edwards was keen to stick to.

Thanks for all the thoughts & prayers. Here’s a quick message for my fans about tonight. #BrokenTibFibFish

“I remember Alyssa called me and she was like, ‘We’re going on tour, girl. Haus of Edwards, I booked us down in Australia, Shangela. We’re going down there, mama. Get ready,’” Shangela recalls. “I said, ‘Alyssa, I’m in a cast.’ And she goes, ‘I don’t know what you got to do mama, but you better hurry up.’”

Even though Shangela’s doctor informed her she probably wouldn’t be able to wear heels, let alone perform, until August, Shangela says she doubled up on the rehab and by March was on tour with the Haus of Edwards—wearing a sequined boot, to boot.

“I’m from the South, honey—we don’t wear flat boots on stage,” Shangela says. “But we put that boot cover on, and I went on tour. That made me so much more prouder of myself, because I was like, ‘You know, Shangela, you can come back from anything, mama. You really can.’ And hopefully more people will know that about my journey.”

Shangela often says that she started as a baby on Drag Race but that she’s all grown up—and it’s true. In addition to steering her own career, she also runs a boutique production and management company, Say What Entertainment, to house her own projects, including two comedy specials, as well as to help guide other Drag Race contestants.

“The show doesn’t provide you with a manager or a team when you come out, so we had to really make it for ourselves,” Shangela says. “There were a couple of times that I got swindled, and I didn’t want that to happen to sisters of mine.”

Shangela has also stepped into another kind of mentor role in HBO’s We’re Here. Alongside Drag Race alumni Bob the Drag Queen and Eureka, Shangela gives drag makeovers to small-town folk, unleashing sides to themselves they never knew they had—and, in turn, bringing her own career full circle in a way.

“I’ve been performing in drag now for almost 10 years. It just gives me this special moment of seeing them for the first time put on heels or a corset and knowing that people from the community are coming to see them,” Shangela says. “We don’t come in and try to be anyone’s fairy godmother. We’re not going to fix your life in a week. But we can help maybe empower you with the tools to know how to do it yourself.” 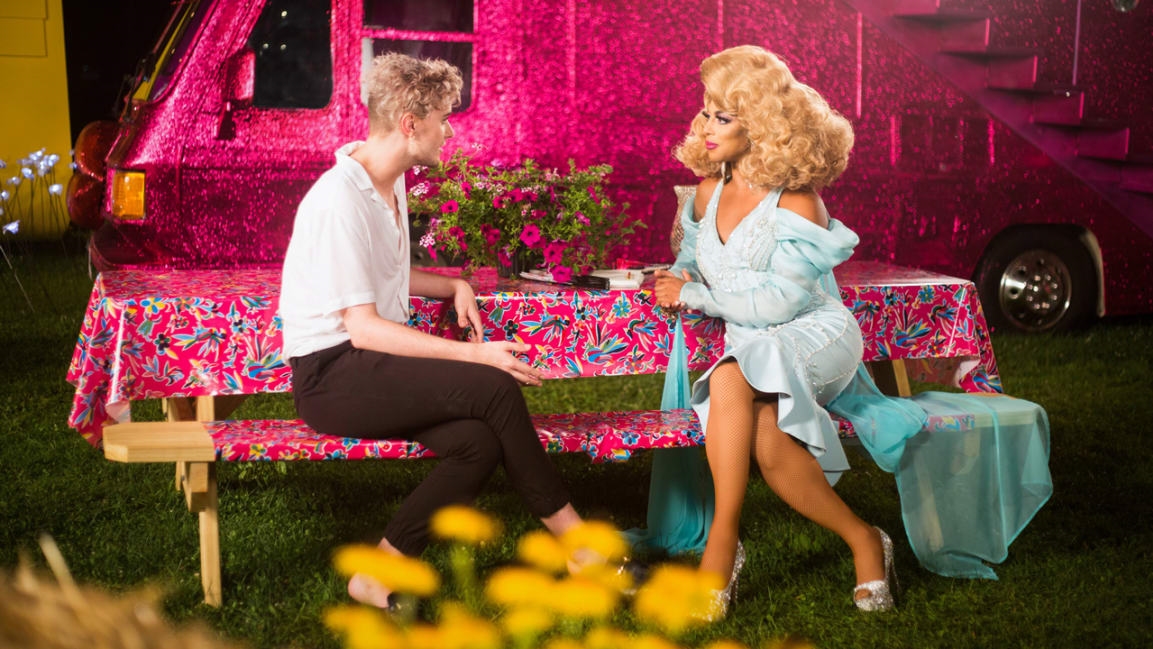