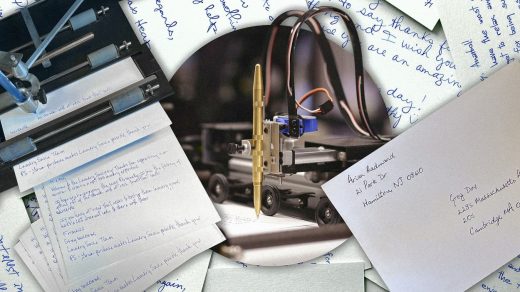 Some 70 years after Unimate, the first industrial robot, was invented, mechanical helpers are revolutionizing an array of industries, from manufacturing to retail to healthcare. Some can assist archaeologists in piecing together 2,000-year-old frescoes, others can lend a hand to architects 3D-printing homes, others yet can help elderly people feel less lonely. In a surprising turn of events, however, robots may have also revolutionized one of the oldest forms of expression known to man: writing.

Imagine an army of robots holding real pens, writing real letters that look eerily realistic to a human’s handwriting. That’s the idea behind Handwrytten, an Arizona-based company that was one of the first to popularize robot scribes.

Since it was founded in 2014, the company’s robots have produced more than 6 million notes and amassed more than 100,000 customers, including Netflix, which fittingly used the robots to promote a movie called The Last Letter to Your Love. After a slow start and a COVID-19-related slump, Handwrytten closed 2020 with $3 million in revenue, and it’s projecting to triple that by the end of 2022.

The premise is simple and preposterous at once: Individuals and companies alike can choose among 30 handwriting styles (a single card starts at $3.75; monthly packages range from $99 to $14,250, based on the number of cards you need) or replicate their own for up to $1,250. And if you really mean business, you can integrate the service into your sales and marketing strategy and have your system automatically send a handwritten thank-you card when, say, a customer purchases a car from your dealership.

But Handwrytten’s robots are not the only ones toiling away approximating a human touch. In fact, it’s just one of a half-dozen companies relying on the dexterity of robots to perform an intrinsically personal activity. Addressable Mail focuses entirely on real estate listings, while IgnitePost is more geared to e-commerce, fundraising, insurance, and sales. There’s Handwrytten with a “y” and Handwritten with an “i” (according to Jared Moore, who founded the latter, Handwritten’s main clientele is insurance companies). And then there’s Simply Noted, which caters to a wide range of sectors, from medical sales to B2B companies, or, as its founder, Rick Elmore, says, “anybody who has a client.”

Many of these companies pride themselves on using custom-built, state-of-the-art robots, and every company I spoke with, over the phone or by email, said that the industry is rife with potential. Arian Radmand, who started IgnitePost in 2016, says business has doubled every year for the past three years, “with revenue in the millions” today. Meanwhile, David Wachs, the founder of Handwrytten, has grown the company’s fleet from a dozen 3D-printed robots that used to take five minutes to write a card to 175 patented ones that can write one in less than half that time.

Each Handwrytten robot looks a bit like a printing press, with an exposed flat surface where a piece of paper is rolled in and out under a set of rubber wheels. A robotic arm, grasping on a ballpoint pen, then zigzags above it, raising and dropping the pen after every couple of letters, much like humans lift a pen while writing.

The guiding principle for many of these companies is twofold: We humans (and prospective customers to any brand vying for our business) get so many emails that we don’t open any of them. And we have become so blasé about junk mail that we don’t open those pesky envelopes either. Handwritten notes, Radman argues, can cut through the noise and solve the saturation problem, all the while helping companies forge a deeper connection with their customers so that they don’t go to a competitor.

“It’s in our DNA as human beings to value personalized items like this that we can touch and hold, meaning humans subconsciously pay more attention to, and place a higher value on, a handwritten note than they would something like an email or text message,” Radman says.

Unsurprisingly, the target audience for these brands is any customer-facing business for which client relationships are key. Elmore says that Simply Noted has done business with Tesla, Marriott, and Ford, while IgnitePost has worked with First Republic Bank, Sothebys, and NPR. Handwrytten’s largest client is a company that provides pet hospice care, which brings in $250,000 a year. Other clients run the gamut from small-business owners to furniture and luxury perfume brands, as well as a “large department store with a very large push over the holidays,” Wachs says, though he was reluctant to share actual brand names because, let’s face it, who wants to admit their painstakingly handwritten notes are actually penned by a machine?

The competition in the space is fierce, and each company has tried to push unique services to drive more business. IgnitePost has a “colocation program” that allows any company to host one of its robots on-site to leverage real-time handwritten notes. Radmand says pricing varies between $1,900 and $2,300 a month, depending on the number of robots and the level of integration needed.

Meanwhile, Handwrytten recently introduced a location-based service that lets users draw a circle on a map, select a set of criteria like age, net worth, and income levels, and send personalized notes to people who fit those criteria and live within that circle. Restaurants, movie theaters, and other small businesses can send notes locally about new openings or special offers, but the company says that politicians are also using the service to send notes to voters as part of their midterm campaigns.

Are the “handwritten” letters actually more effective? Addressable touts a third-party blind study, which revealed that participants couldn’t tell a human’s handwriting from that of its robots, though the parameters of the study remain unclear. (The company didn’t respond to several requests for comment.)

According to a Washington Post article from 2019, some people do find out and feel betrayed as a result, but for those who don’t the trickery appears to do the trick. Wachs says that when one of his clients, an automotive company, replaced printed invitations to come into a dealership with a handwritten one, the car company saw a 27% greater response rate. Radman claims that a recent customer saw a 72% conversion rate from one of their campaigns, speculating that if the conversation rate is 72%, the open rate must be even higher because it’s unlikely that every single person who opens the letter ends up following through.

Ultimately, if this really fools people into thinking an actual human sat at their desk and wove some lovely words together, then that’s because these companies understand that human handwriting is inherently imperfect. At Handwrytten, the engine takes into account character variation and ligature: The height and width of individual characters varies every time, and if one sentence has multiple words with double o’s and double l’s, these are going to look different from each other as well. The left margin varies so that not every line starts on the same edge. And the robots write with a slight bend that makes it look like people aren’t writing on a perfect horizontal line. As Wachs says, “If it’s too perfect, people will immediately know it’s not real.” 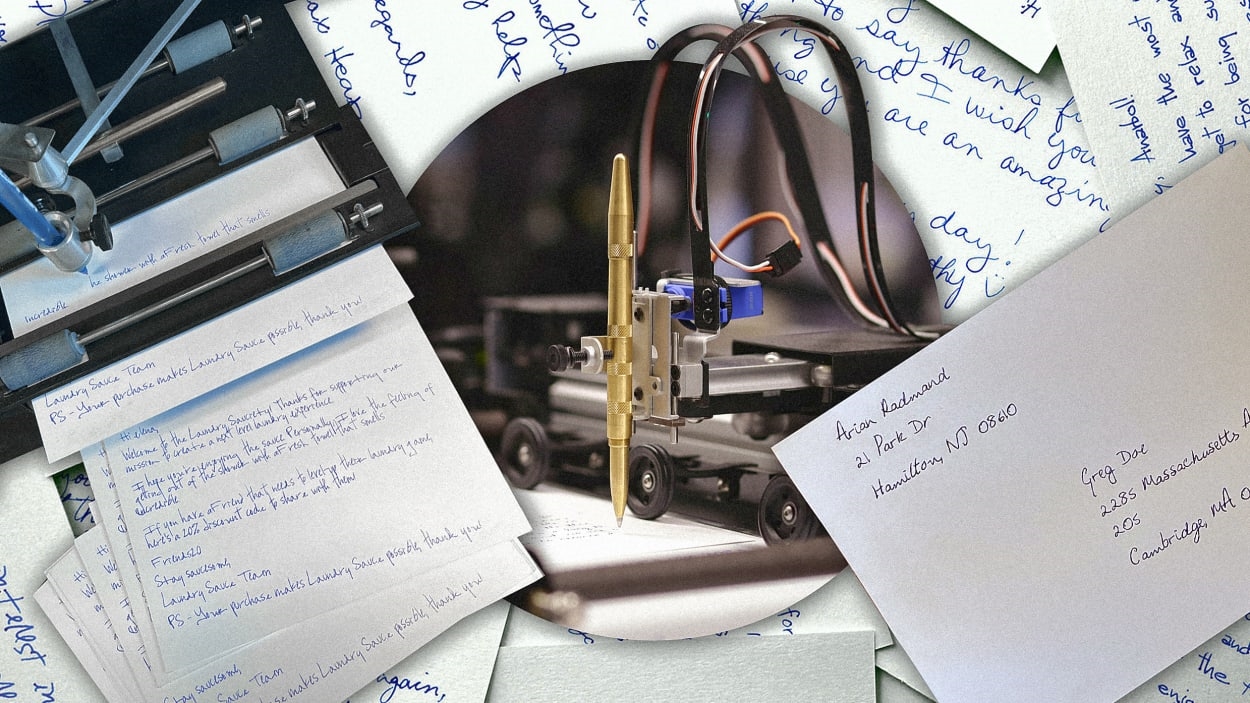