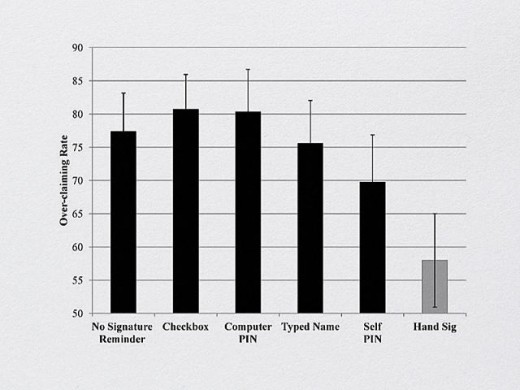 Is Your E-Signature Making You A Liar?

It just might be, according to this clever series of tests, unless designers have a say.

The days of the majestic handwritten signature are pretty much done. The IRS encourages taxpayers to file their returns electronically, identifying themselves not with a pen but a special PIN. Credit card payments now involve a tap or a click as often as a hasty cursive scribble. It’s safe to say John Hancock wouldn’t have achieved epic status if he’d typed his name at the end of the Declaration of Independence—then hit send.

E-signatures do save money, paper, and time, but in exchange for speed they might sacrifice that trace of ourselves an autograph is supposed to represent. In a new paper, management scholar Eileen Chou of the University of Virginia reports that the “weaker self-presence” of digital signatures might have an “unintentional—but critical—consequence”: dishonesty. Chou backs her claim with a series of seven (count ‘em, seven) clever tests in the Journal of Experimental Social Psychology.

“While e-signatures may objectively perform the same function as signing by hand, they do not exert the same symbolic weight in subsequent decision making,” she tells Co.Design. “This research serves as a cautionary tale of the price we might be paying for convenience.”

There’s plenty of theory behind Chou’s hunch. We form an intimate bond with the signature we’ve been practicing since third grade; indeed, research has found that merely signing our names can activate a sense of self. The gravity of commitments that command signatures—from tax forms to marriage licenses to personal checks—speaks to the value we place on them. The eBay price of autographs does, too.

In other words, it makes sense that we’ve come to identify a signature as a physical substitute for our actual selves. And, in turn, that we might feel less morally beholden to an impersonal digital alternative. Still, the burden of evidence is steep for such an argument, so Chou arranged a formidable battery of experiments to test the idea.

Study 1. Fifty-eight participants took part in a lab test that involved rolling a 12-sided dice twice. Their combined score equaled the number of tickets they received for a $50 raffle—but since there was no one monitoring the test, participants self-reported their scores. Half the participants read these instructions on paper and signed them in pen before rolling; the other half read them on a computer and typed an e-signature. The e-signers reported an average sum of 15, which was significantly higher than what the average should be (13) and 16% higher than what hand-signers reporters.

Study 2. In a similar test, 73 participants graded their own math test in exchange for raffle tickets. Some signed the task instructions by hand; some typed their name; some gave no signature. Unbeknownst to the participants, Chou had used invisible ink to mark the tests in a way that showed who cheated. About 18% of the e-signers cheated, a figure higher than those who didn’t sign at all (15%). Meanwhile, none of the hand-signers cheated on the task.

Study 3. This study, conducted online, gave the 112 participants a monetary incentive to cheat on an anagram task. Again, participants self-reported their scores—but three of the anagrams were unsolvable, giving Chou a window into who cheated. Participants who signed their name by hand (albeit with a mouse) cheated significantly less than those who used a PIN as an e-signature.

Study 4. In another online study, 270 participants visited a virtual coin-flip site, flipped the “coin” 20 times, and reported their results—earning raffle tickets for every head they flipped. Participants who checked an e-sign box (55%), used a PIN (59%), or typed their name (54%) all got significantly more heads than probability said they should (50%). Those who signed with a mouse by hand, meanwhile, did not score significantly differently from half.

Study 5. More than 300 online participants read four passages from a GRE test, ostensibly to gauge how long each took to finish. They had a monetary incentive to take longer, and again, they self-reported their time—not knowing the computer was also tracking it. The cheating rate of four types of e-signatures (check box, computer- and self-generated PINs, and typed name) all ranged between 70% and 80%. Those who signed by hand via mouse cheated 58% of the time.

Study 6a. Chou split an online group of 285 participants into five signature conditions—four e-signatures and a handwritten (via mouse) group—and asked them to rate how much of themselves they saw in the signature. (e.g. “That signature symbolically represents who I am.”) Participants in the handwritten group gave higher ratings (an average around 3.4) than those in the checkbox (2.5), PIN (1.8 computer-generated, 2.3 self), or typed (2.2) groups.

Study 6b. The final online study split 118 participants into two conditions. Some signed by hand but were told handwritten signatures are a weak symbols of the self in the digital age; others signed by hand but were told handwritten signatures remain strong. They all then did a series of math problems, six of which were rigged to “accidentally” flash a wrong answer on-screen. Whereas 64% of the weak group copied that wrong answer, just 45% of the strong group did—a strong sign that self-presence was the causal factor in the signature dishonesty.

So there you have it: seven studies suggesting that e-signatures not only encourage dishonesty—or at the very least fail to discourage it—but do so because we feel less self-identification toward them than we do toward our own handwritten signatures. Chou capped off her research with a meta-analysis of her own work for good measure. When combining the results of all seven studies (as well as five unreported ones), she found her conclusions to be “highly reliable.”

Some caveats do bear consideration. The stakes in these studies were low: cheating on your federal taxes is not cheating on a virtual coin flip. The tests didn’t assess email signatures, which are arguably the most common form of digital autograph; Chou tells Co.Design she thinks “people may not internalize those as signatures at all” since they’re programmed to appear automatically. And any pernicious effects of e-signatures could fade as they become more common in time.

But if e-signatures do have a hidden downside, even in the short-term, the implications are potentially severe. Chou points out a number of scenarios where digital dishonesty might have a meaningful negative social outcome. The IRS, Congress, and federal judges have already made shifts from handwritten signatures to electronic or “autopen” versions; the College Board may consider a similar move for the SATs, as might financial institutions for mortgage applications and home loans.

Chou believes designers can help. E-signature tools can be crafted in a way that lets people personalize their name and thus exert a greater sense of self—with signing via a mouse or a stylus the most obvious option. As several of the tests showed, the psychological impact of a signature seems to come from the physical act of signing itself, rather than the form in which it was transmitted. Chou knows preserving the power of the John Hancock doesn’t require living like the man himself.

“The research is not advocating for us to revert back to paper and ink all together,” she says.

Eric Jaffe is an editor at CityLab, where he writes about transportation, history, and behavioral science, a… 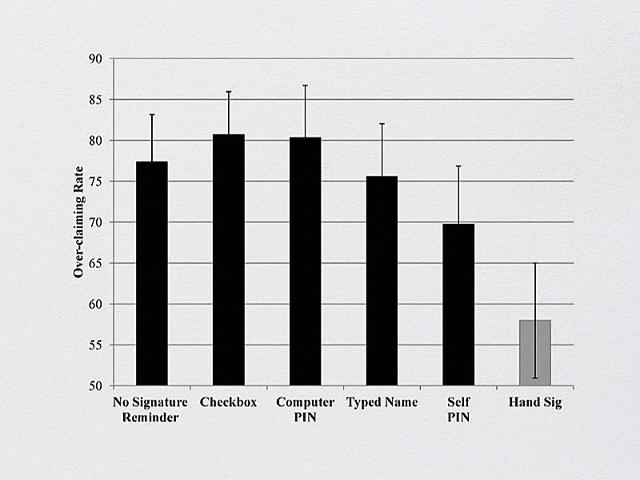