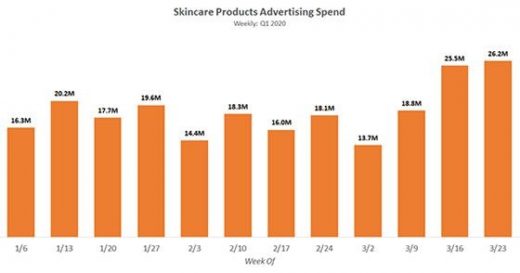 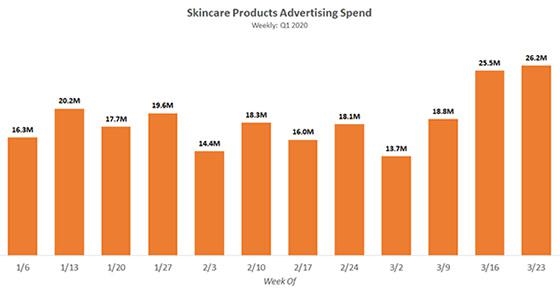 Skincare product ad spend has been one of the most interesting categories impacted by the pandemic in the United States, according to data released Monday.

Despite its ups and downs since January 6, 2020, brands in the skincare category increased spending from $16.3 million in advertising to $26.2 million by March 23, 2020, according to MediaRadar.

The biggest advertisers by spend in Q1 2020 were Johnson & Johnson, Procter & Gamble Company and L’Oréal. All three of these advertisers increased ad spend in March, compared with February. Collectively, these three firms increased their ad investment on their skincare lines by more than $10 million.

Men’s skincare also saw a boost — up 22% in March compared with January and February. The biggest men’s skincare advertisers by spend in Q1 of 2020 were Dove Men+Care, Jack Black, and DTC brands, Hims and Geologie, according to MediaRadar’s study.

For those still coloring their hair, MediaRadar’s data shows the hair-care category spend in advertising spiked in February 2020, jumping from $5 million in January to $16.7 million during the first week of February. The increase dropped once shelter -n-place orders went into effect as many stopped going into the office.