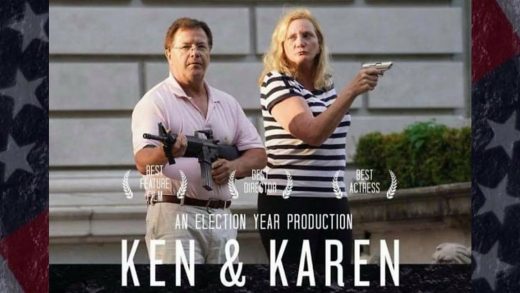 ‘Ken and Karen,’ the wealthy couple who pulled guns on protesters, inspired some genius memes

It was a weekend full of Karens—the nickname du jour for entitled white women on a rampage.

On Saturday morning, there was Grocery Store Karen, who pitched a fit in Trader Joe’s after being told to wear a mask. She was quickly trailed by Fajita Wife Karen, who stared longingly at a pristine plate of fajitas she was unable to eat, as servers struggled to produce the shredded cheese she required before taking so much as one bite. Then on Sunday came Grocery Store Karen Beta, who began hurling items from her cart at the floor because of—you guessed it—the store’s mask policy.

After such a stacked weekend, who could have guessed that Sunday night would deliver the Uber Karen? No, she’s not a woman who flipped out in an Uber upon being asked not to cough directly in the driver’s nostrils, but rather the epitome of what we’re talking about when we talk about Karens. (To be fair, her husband, also a Karen, accompanied her on the journey as well.)

In response to St. Louis mayor Lyda Krewson reading aloud over Facebook Live a list of names and addresses of locals calling for police reform—effectively doxxing them—hundreds of protesters headed toward her tony house to call for her resignation in person. As the group passed the home of a married pair of personal injury attorneys, the couple appeared on their front lawn armed to the teeth, guns trained on the protesters.

A couple pointed guns at protesters in St. Louis as a group marched toward the mayor’s home to demand her resignation. https://t.co/5EqDd43QCd pic.twitter.com/KWNaif77ch

The juxtaposition of preppy aesthetic and gaudy architecture with heavy artillery turned the pair—the precise inverse of Bonnie and Clyde—into an instant meme.

Twitter denizens, thumbs still sore from typing jokes about Trader Joe’s and shredded cheese fajitas all weekend, forged on, clowning on the reactionary couple all through the night, and well into the morning.

They compared them to characters on TV shows.

what you think you’re gonna look like//what you actually look like pic.twitter.com/x8j163q5CS

Nice that they kept the house in the family all these years. https://t.co/kd5b9SPbqP pic.twitter.com/lYWxpWbhHJ

Not gonna lie: Pumpkin and Honeybunny look like shit these days. pic.twitter.com/DrbqYFX51C

Mickey and Mallory look like shit these days. pic.twitter.com/rOSuF6Znr5

Not sure about this new Tarantino. pic.twitter.com/Pwk7X5hQiD

Who needs a Tarantino movie, though, when you’ve already got all the ingredients for a movie of your own?

Omg who did this?! ???? STL Ken and Karen pic.twitter.com/z7fSsjSvVh

Tom Arnold and Patricia Clarkson are like “Call my agent” pic.twitter.com/nPoyx10LgN

People had a lot of other random ideas for who the couple resembled, as well.

someone who can draw please combine these pic.twitter.com/YaY2BBOByp

Because time is a flat circle, though, and we appear to be stuck in a slightly mutating recursive loop, the couple ultimately reminded some Twitterers of one of the weekend’s previous Karens.

My wife, date night after 3+ months locked up on quarantine. Waiting for shredded cheese as it’s the only way she can eat fajitas. We’ve asked 4 people, going on 18 minutes now. Just unreal at Allen, TX location. We gotta quit blaming #COVID19 for crappy service. pic.twitter.com/GsDW3fDMBu

Thankfully, the couple didn’t end up firing any shots, and the protesters continued their march unscathed. Considering that the President of the United States retweeted the ABC video of the couple, which could be interpreted as encouragement for pulling guns on protesters, there are bound to be more similar incidents soon. May they have no Karen casualties either. 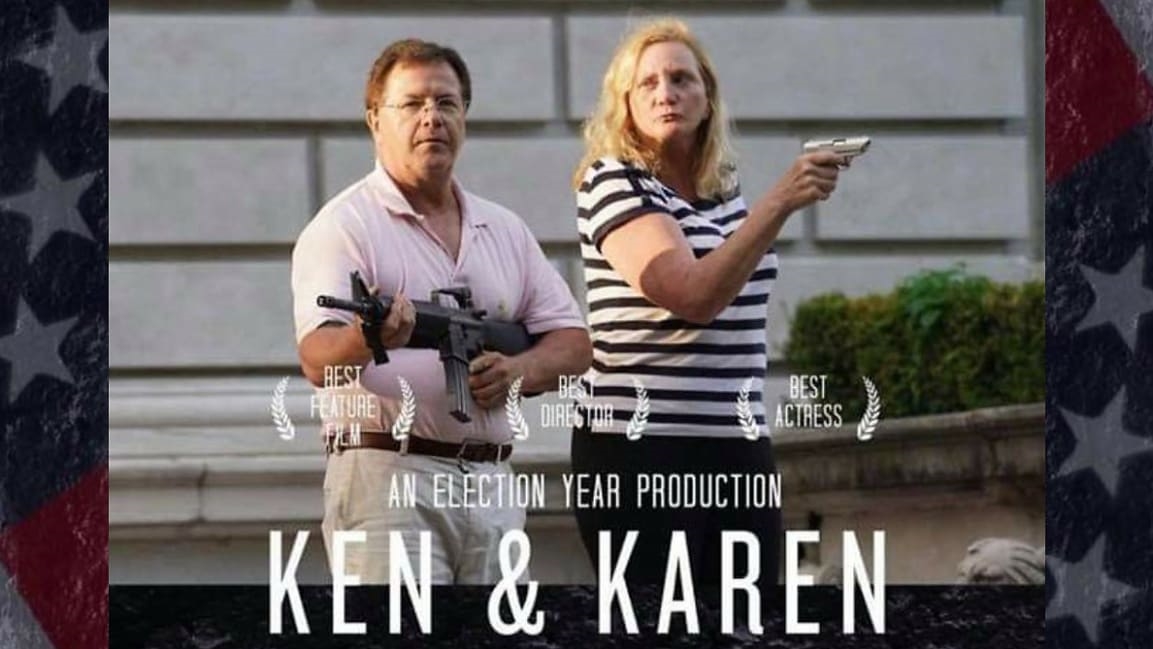