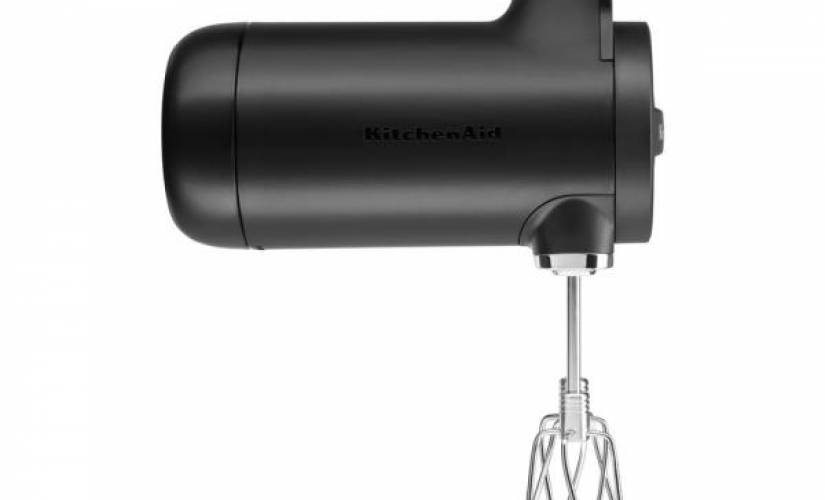 The hand mixer has been a long treasured appliance in our house. It’s been through so many holiday meals not to mention all the recent baking we’ve found ourselves doing while stuck at home.

Like everything else where we’ve cut the cord, the hand mixer has also gone cordless. KitchenAid has been our family’s go-to brand for mixers, so we thought it was as good a time as any to see what their cordless hand mixer could do.

About the Cordless 7-Speed Hand Mixer

The KitchenAid cordless 7-speed hand mixer just recently was released as part of its new cordless collection of small appliances. They also offer a cordless hand blender and cordless chopper. All use the same rechargeable lithium battery, making them compatible.

Features include seven speeds that are similar to those on their hand mixer with a cord. These speeds let you mix, whip, and stir.The speeds make it ideal for all types of mixing needs, including egg whites, heavy cream, butter and sugar, mashed potatoes, and cookie dough.

It includes a soft start feature, so the beaters come up gradually to the speed you’ve selected, reducing the risk of splatter.

Other features include an ejector button and beater accessories. Its innovative design also allows it to stand on its own. A battery indicator light also lets you know when it is time to charge the battery.

Color choices include our favorite, matte black. You can also select from numerous other colors, such as onyx black, passion red, matte charcoal gray, empire red, white, and blue velvet.

This is a convenient small appliance that gets it done. I like that it only takes two hours to completely recharge. While I haven’t attempted to see if it would work long enough to make 200 cookies like its website claims, it does seem to hang in there for as long as we need it for. KitchenAid does make high-quality appliances that are built to last. I particularly like their color options in recent years to personalize it more for what we like.

The one con is that it doesn’t feel as powerful as our hand mixer that plugs into the wall, and it’s a decade or so old. There is a little sluggishness on the tougher to mix items, but we just whip out the stand mixer for that (a KitchenAid that is still going strong 20 years on!).

The cordless mixer comes with a charger and two dishwasher-safe beater attachments.

The KitchenAid website sells the cordless hand mixer for $ 99.99. You can also find it at Amazon, Bed Bath & Beyond, Best Buy, QVC, and HSN.

It’s even perfect for taking on the road in the RV. Plus, you can add more color to your kitchen.

Deanna is the Managing Editor at ReadWrite. Previously she worked as the Editor in Chief for Startup Grind and has over 20+ years of experience in content development.