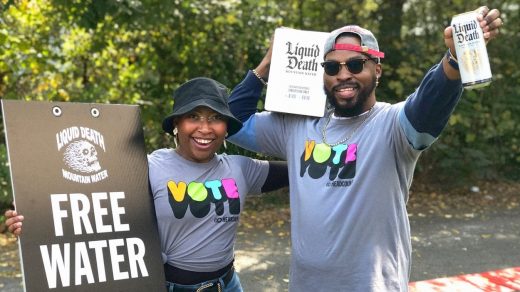 “Do you live in Georgia? Do you have to drink water to stay alive? Do you want to participate in democracy?” an ad released (November 17, 2022) asks. “Too bad!”

The tongue-in-cheek spot, from canned-water company Liquid Death, highlights a controversial law passed in Georgia last year, SB 202, that criminalized distributing food or water to voters in line at polling places. The satirical campaign is part of a partnership with HeadCount, a nonpartisan voter participation nonprofit that will hand out thousands of cans of water to voters across Georgia (within the legal parameters) to help increase awareness about the suppression law and motivate people to vote.

For HeadCount, which aims to boost voter participation through music and culture, it made sense to approach a water company to combat a law that targets the seemingly innocuous act of keeping humans hydrated. So as part of its get-out-the-vote initiatives in the Peach State, it recruited Liquid Death, says Andy Bernstein, HeadCount’s executive director, who also appreciates the company’s sustainable approach in eschewing plastic bottles for recyclable cans.

Andy Pearson, Liquid Death’s VP of creative, grew up in the Atlanta area and was conscious that get-out-the-vote campaigns often need new angles to get people’s attention. His team came up with the ads for Election Hydration Kits, which comprise a fanny pack and a can of water, that voters can take to the polls legally to stay hydrated while waiting sometimes hours to vote. Priced at $1, the kits started selling online (November 17, 2022) and are already sold out.

Satire has been an integral part of Liquid Death’s marketing, even in the product itself, which is presented with risqué and somewhat sinister branding that makes it look more like beer or spiked seltzer. “It’s sort of in our DNA to poke at stuff that we just don’t think makes sense in culture,” Pearson says. “We’ve never waded into anything political before, but we felt like this was a great opportunity to hold a mirror up to some bullshit.”

This approach was important to the folks at HeadCount, who wanted to use humor to expose the absurdity of the law. “Bringing joy and fun to elections is really important, especially in a state like Georgia, where voters are being inundated with political advertising,” Bernstein says.

More important than the kits, HeadCount’s volunteer street teams are also handing out four pallets’ worth of Liquid Death (about 7,000 cans) at university campuses, concerts, and festivals in the Atlanta area this weekend. They were at the Violent Femmes concert last night, as well as the Votelanta concert, a voter mobilization event featuring rapper Gucci Mane. They’ll also give out cans at the polls, making sure to stay 150 feet away from polling stations and 25 feet away from voting lines, the arbitrary distances set out by SB 202, also known as the Election Integrity Act of 2021. (In another humorous twist, Liquid Death supplied HeadCount’s volunteers with measuring tapes.)

“The state of Georgia is so important politically,” Bernstein says, noting that these kinds of fun tactics can help mobilize “fence-sitters” in a swing state that helped decide the presidential election in 2020 and will be key in the upcoming midterms for Senate Democrats who hope Raphael Warnock can defend his seat against Republican opponent Herschel Walker. But Bernstein says there’s also not enough awareness about the law on the ground. As they hand out the cans at the concerts, they’ll also distribute voting cards, printed with information about SB 202 and how and where to vote.

Georgia has become one of the more restrictive states for voting. But companies rarely come out as publicly on such politically charged issues as Liquid Death has with SB 202. When the law passed, Atlanta-based Delta Airlines spoke out only after there was mounting public pressure to boycott the carrier (particularly over news that its lobbying team reportedly helped craft the law). Meanwhile, Major League Baseball pulled the All-Star Game out of the state and moved it to Colorado. But Bernstein says companies can do more. “I believe that corporate America has a huge role to play in protecting voting rights and encouraging people to participate,” he says.

This isn’t Liquid Death’s first time using clever pranks to make a point. “I don’t think anyone would ever accuse us of shying away from a fight that we think is important,” Pearson says. The company has an ongoing campaign, Loving Homes for Plastics, that provides a paid stamped envelope for customers to send their plastic bottles back to Coca-Cola and Pepsi headquarters. (Those corporations keep churning out plastic bottles, so they must “really, really love plastic more than anyone,” the company cheekily surmises.)

But this is Liquid Death’s first foray into politics—though Pearson insists that the right to vote shouldn’t be a partisan issue. “This is a stupid commercial, and this is a stupid product, and we should not have to be selling these [hydration kits],” Pearson says. “But here we are.” 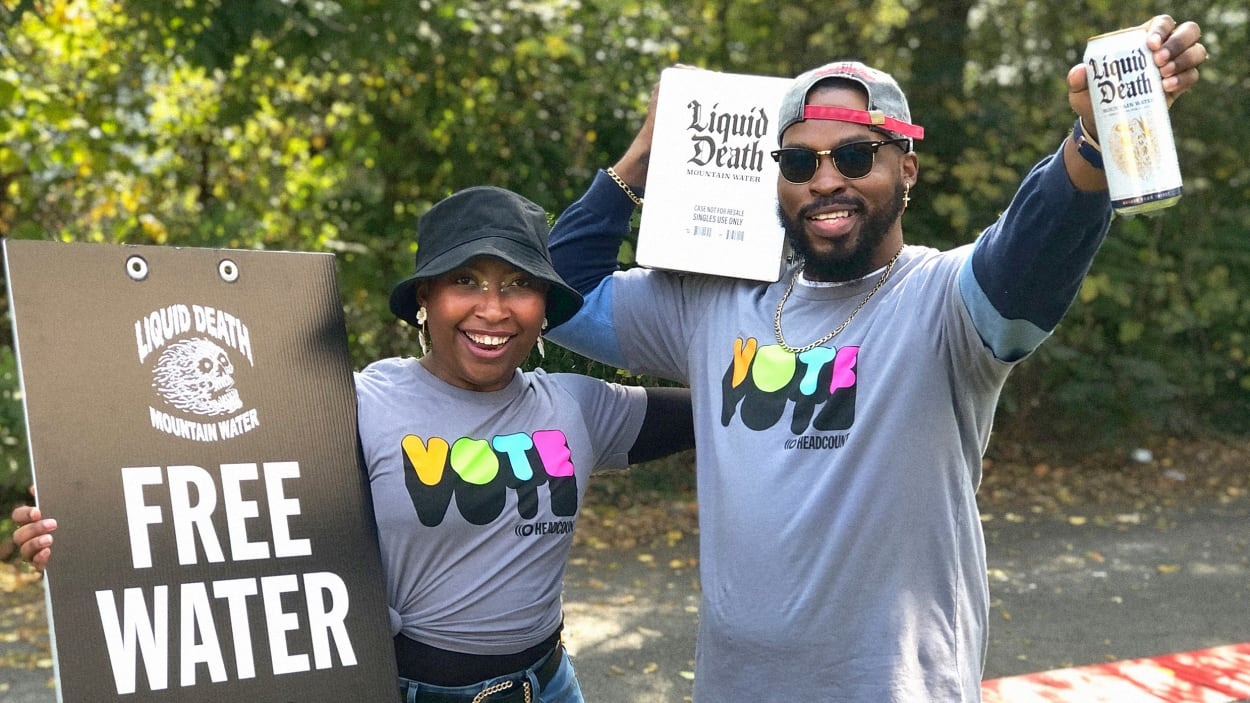