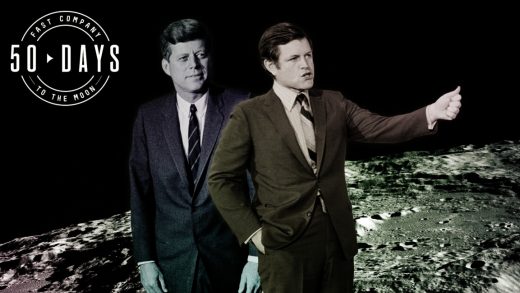 Lost to history: The convergence of the first Moon landing and Chappaquiddick

This is the 23rd in an exclusive series of 50 articles, one published each day until July 20, exploring the 50th anniversary of the first-ever Moon landing. You can check out 50 Days to the Moon here every day.

One of the biggest political events of the late 1960s happened right in the middle of the first Moon landing—and it would have been a lot bigger story if it hadn’t been overshadowed by Apollo 11.

The event has long since become known by the single word “Chappaquiddick,” the harrowing car accident on the island of Martha’s Vineyard, which killed Mary Jo Kopechne, a 28-year-old political staffer devoted to Robert Kennedy and which shattered the political career of Massachusetts Sen. Edward Kennedy, who was at that point the last living Kennedy brother of his generation, and the man widely anticipated to challenge President Richard Nixon’s re-election in 1972.

Chappaquiddick happened late on the night of July 18, 1969, or in the early morning hours of July 19. The accident, Kopechne’s drowning death, and Sen. Kennedy’s 10-hour delay in reporting the accident—let alone his failure to summon any help to rescue Kopechne from his submerged car in the moments after he swam to shore—all became public on July 19, and so burst onto the front pages of newspapers across America on the morning of July 20, 1969.

That was the day that astronauts Neil Armstrong and Buzz Aldrin were scheduled to set foot on the Moon.

It was an odd, even jarring, collision of achievement and tragedy, braided once again into the story of the Kennedy family.

Americans were about to step on the Moon because of the vision and leadership of John F. Kennedy, who didn’t live to see the moment. As that was happening, the fourth Kennedy brother was engulfed in yet another Kennedy family tragedy that would, appropriately, shadow his political career for the rest of his life, and prevent him from chasing what some hoped would further propel the family’s destiny, to elect another Kennedy to the presidency while once again defeating Richard Nixon. (The oldest brother, Joseph Jr., was killed in a World War II bomber accident; John and Robert were both assassinated.)

The accident on the wooden bridge on Chappaquiddick Island, in which Kennedy accidentally drove his sedan off the bridge, with Kopechne a passenger in the car, was a devastating event personally and politically. Kopechne lost her life. Kennedy, who had just that year been chosen the youngest majority whip in the history of the U.S. Senate (he was 37), lost his political future.

The Senator’s behavior was both indefensible and inexplicable—and that was his description of it, in a 12-minute address he eventually gave to account for the accident, a speech carried live by all three national TV networks a week after the events.

The blending of the Moon landings that had turned into a tribute to his brother, with the coverage of his own scandal, was impossible to avoid—or to resist. Chappaquiddick got much less coverage—and much less dramatic coverage—because of Apollo 11, which became clear only after the astronauts returned safely to Earth.

On July 20, 1969, the New York Times and the Washington Post had nearly identical Sunday front pages. Banner headlines announcing the arrival of the Moon landing, with the Chappaquiddick story tucked immediately under the Moon headline, prominently on the upper left. “Woman Passenger Killed, Kennedy Escapes in Crash,” the Times wrote. “Kennedy Passenger Dies in Car Plunge,” wrote the Post.

The Boston Globe reversed that judgment: Kennedy’s accident and Kopechne’s death took up the entire top two-thirds of the Sunday front page in an unflattering portrayal from the usually sympathetic hometown newspaper: “Ted Kennedy Escapes, Woman Dies As Car Plunges Into Vineyard Pond; Senator Wanders in Daze for Hours.” The Moon landing was at the bottom of the page.

But on the second day after the scandal broke, on what should have been the day when enterprising reporters started to tease apart the contradictions and mysteries in Kennedy’s statements and behavior, the story all but disappeared. The front pages of the Monday Times and Post were devoted completely to the Moon landing, understandably. Chappaquiddick had been banished to inside pages, but in both the Times and the Boston Globe, you had to search for the Ted Kennedy story. The Times devoted its entire Monday A-section to the Moon landing—16 full pages of coverage. Chappaquiddick got a single column headline on page 19, “Kennedy To Face Charge in Crash of Leaving Site.” The Globe too buried Chappaquiddick on the day after the Moon landing: just a single story, on page 15. The Post gave Chappaquddick most of page A3, with the headline, “Kennedy Is Held Blameless By D.A.”

It was only on Saturday, July 26, eight days after the accident itself, that the coverage of Kennedy’s scandal boomed back onto the front pages. The astronauts had splashed down, been greeted by President Nixon, and were judged not just healthy, but heroes.

With the coverage of Apollo 11 finally receding, the Times on that Saturday not only put Kennedy on the front page, he was the lead story, with a three-deck headline: “Kennedy Weighs Quitting, Asks Advice of Voters; Pleads Guilty to Charge.” The Post devoted the entire right half of the front page to Chappaquiddick, also with a dramatic three-deck headline that said Kennedy “Considers Resignation.”

Similarly, in the Boston Globe, Chappaquiddick had been on the front page of Kennedy’s hometown paper every day of the week, with a single story, but on Saturday, after Kennedy’s speech, the Globe again devoted the top two-thirds of the front page to the accident, with four stories that started on 1A.

All three news networks—ABC, CBS, and NBC—had pre-taped interviews with Kennedy about the Moon landings and the legacy of his brother, before Chappaquiddick happened. Only ABC went ahead and used theirs, after the scandal broke, making clear it had been recorded before the accident. Ted Kennedy, in fact, had in a speech just a few weeks earlier said that with the Moon landings all but achieved, “a substantial portion of the space budget can be diverted to the pressing problems here at home.”

Oddly, there is no connection in the popular imagination between the timing of that first Moon landing and Chappaquiddick, a single-word scandal that people identify instantly but that isn’t connected to a specific moment in time. Chappaquiddick haunted Ted Kennedy’s life, even as his Senate career became more and more distinguished, in part because of the doubts it suggested about him that were raised right as the scandal was unfurling.

Time magazine had done a cover story on Kennedy’s growing power and influence in January 1969: “The Ascent of Ted Kennedy” was the headline. Time did a second cover story that year on Kennedy, the week after the magazine’s Moon landing cover story, two weeks after Chappaquiddick. Kennedy was in a photograph on the cover of the August 1, 1969, issue, looking grim in the odd neck brace that he wore to the funeral of Mary Jo Kopechne. The headline: “The Kennedy Debacle: A Girl Dead, A Career in Jeopardy.” The story said that “the Kennedy debacle became a topic of more interest in much of Washington and elsewhere in the country than man’s landing on the Moon.”

Time goes on to quote a Washington political analyst saying, “Can we really trust (Kennedy) if the Russians come over the ice cap (with nuclear missiles)? Can he make the kind of split-second decisions the astronauts had to make in their landing on the Moon?”

Charles Fishman, who has written for Fast Company since its inception, has spent the past four years researching and writing One Giant Leap, a book about how it took 400,000 people, 20,000 companies, and one federal government to get 27 people to the Moon. (You can order it here.)

For each of the next 50 days, we’ll be posting a new story from Fishman—one you’ve likely never heard before—about the first effort to get to the Moon that illuminates both the historical effort and the current ones. New posts will appear here daily as well as be distributed via Fast Company’s social media. (Follow along at #50DaysToTheMoon). 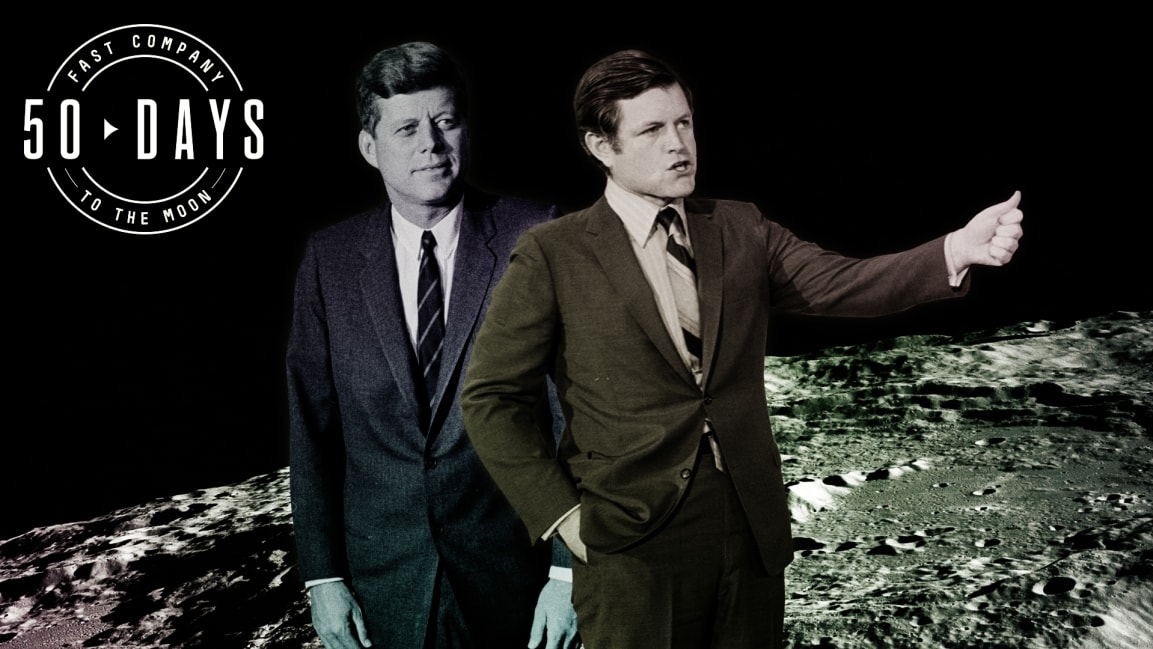