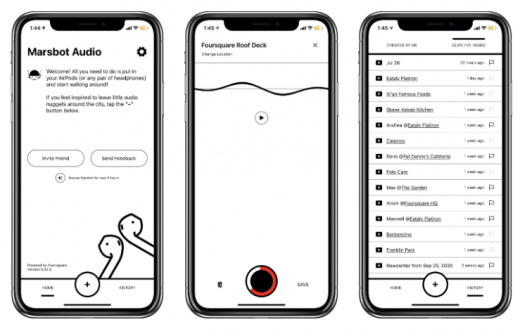 Marsbot is Foursquare for AirPods

Its augmented reality for your ears.

Foursquare began life as a gamified social “check-in” app, which offered helpful tips for others as they competed to become “the mayor” of local venues. It evolved into a local search purveyor but after adoption plateaued and investors grew restless, the company pivoted to location intelligence. And although the Foursquare app continues to exist it’s now primarily a first party data source for the B2B analytics business.

Clippy meets Her. With Marsbot, company founder Dennis Crowley has effectively reinvented Foursquare for audio. Dubbed “an experiment,” Crowley calls it “a lightweight virtual assistant that proactively whispers local recommendations (and other fun snippets) into your headphones or earbuds as you’re walking around.” With tongue somewhat in cheek, he describes Marsbot as a cross between the original Foursquare, Microsoft Word’s Clippy and the virtual assistant from the film “Her.”

Right now Marsbot is only available for iOS but an Android app is coming. It’s a mobile app, but most of the action happens in your earbuds.

As users walk around town, Marsbot “will proactively whisper things to you that you may find interesting.” Things in this case can include places, buildings, public art or people. If you allow it, the app will announce to other Marsbot users that you’re nearby and vice-versa. People can also record audio snippets about places that others will hear.

A basic use case involves being in a restaurant (at some point in the future) and getting tips about menu items in your ear. It will also alert you without a prompt that there are other interesting places close by. However, users must be in or very near places for Marsbot to activate.

100 million users on deck. This is essentially the same vision Crowley had for Foursquare, transplanted to AirPods. He often spoke in the early days of the company about “making cities easier to use.” Marsbot seeks to leverage Foursquare’s local data and user-generated content to fulfill that promise via augmented reality, which isn’t limited to your smartphone’s camera.

There may be more than 100 million people in the U.S. who own AirPods or an equivalent set of earbuds. That’s an already massive installed base of potential users.

A virtual assistant in your earbuds that can make you smarter or enhance your experience of the world is more compelling than glasses (see Google Goggles). You also don’t need to invoke Marsbot with a “hotword” like “Hey Google.” It uses your location — right now it has to be “always on” — to trigger audio notifications.

The idea is inspired; the execution will be key to whether people adopt and use it. Regardless, Marsbot points the way toward a new category of augmented reality audio apps that offer all sorts of intriguing possibilities.

Why we care. The marketing implications here are fairly obvious: brand awareness or local ad opportunities tied to location. Once in a venue, the user could also be prompted to take advantage of a special offer. But monetization will follow adoption if Marsbot can get that far.

Getting the user experience right, however, will be tricky. What’s more, currently marginal use cases such as notifying you about nearby friends could become dominant. Hopefully Foursquare will stick with the app, partly because it could become a model for a host of interesting new audio AR experiences. 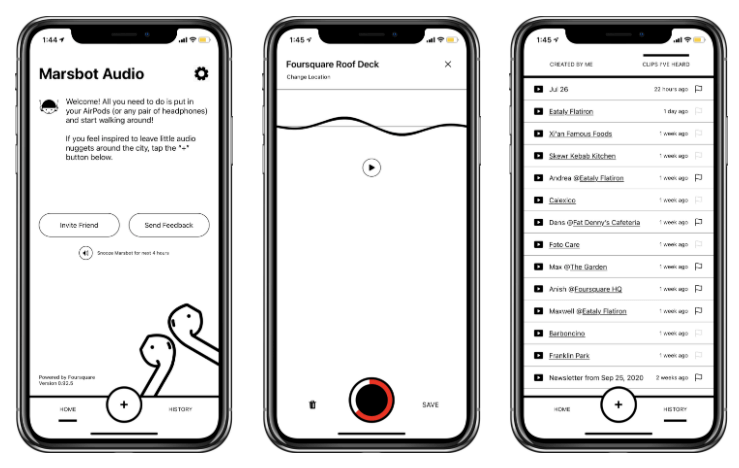