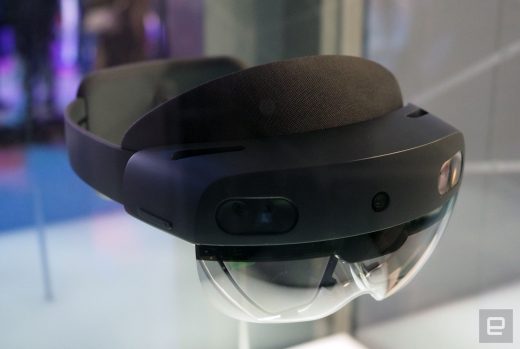 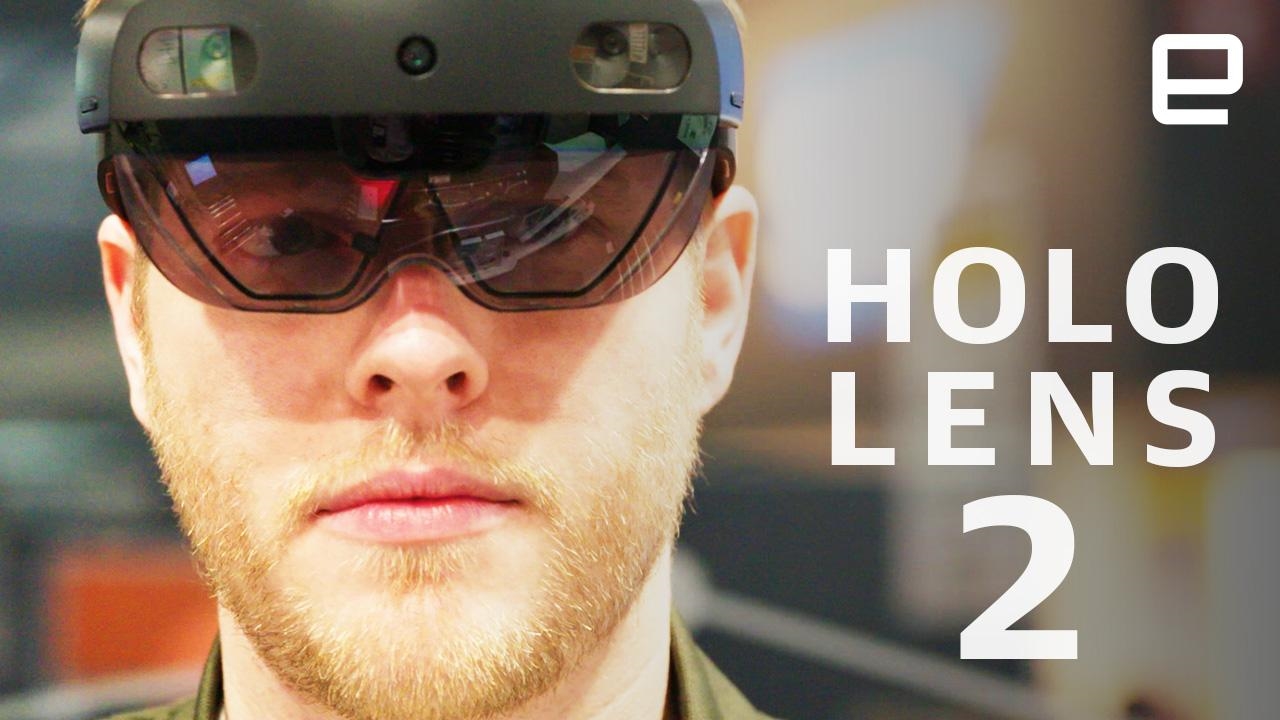 Microsoft has made mixed reality less awkward. That was the major takeaway from my time with HoloLens 2, its new $3,500 headset aimed not at you (or me), but at businesses. It’s not only because the headset is so much more comfortable, (though that can take a lot of the credit). Microsoft has also doubled the mixed reality field of view, making the holographic overlay less like a floating reticle and more like a (virtual) display that’s useful.

Catch up on all the latest news from MWC 2019 here!

At its MWC press event, Microsoft claimed it was the only holographic device that can display 47 pixels per degree of field of view, making 8-point fonts readable. (And meaning it can cram more information on screen.)

The laser-powered display uses waveguides; slender glass panels that reflect hologramatic projections to your eyes. These have been cut from three layers to two, adding to the weight savings found on version two, remade in lighter carbon fiber.

The HoloLens 2 doesn’t require any “fitting,” thankfully. Unlike the laborious calibration needed for the first model, users can slide the device on, tighten the wheel at the back, and get going. Microsoft streamlined this by adding two tiny cameras on the bridge, measuring the users’ pupil distance and adjusting the image appropriately. This added some extra bonuses in the process: eye tracking (which can feed into what you’re seeing in the holographic field, say, scrolling a list of items when your eyes move downward) and retina-scanning login features. This means a company could pass around a HoloLens, and the headset would automatically calibrate and login without fuss.

The headset may weigh less than its predecessor, but how the device has been re-engineered, balance-wise, has had an even bigger effect on how comfortable it is. Microsoft has brought the center of gravity away from the front of your face. While the original HoloLens dug into your nose, HoloLens 2 puts more of the load on the top of your head — the difference was immediately apparent. It also feels less hot, which might be due to the reshuffled components. If it does get a bit muggy, the new HoloLens’ visor can flip up so you’re less separated from other humans in the same room. It’s a simple but common-sense improvement.

During that component shuffle, Microsoft apparently switched to a Snapdragon 850 to power the headset, swapping from the Intel chip found in the first HoloLens — I assume this was done for the sake of power conservation. There are plenty more crucial internal hardware upgrades, too. A new time-of-flight depth sensor makes gesture controls hugely less awkward compared to the original one-handed pinch settings of yesteryear. You can use both hands to grab and tap at buttons, sliders and controls, and the space for interacting with things seems more sensitive, more useful. 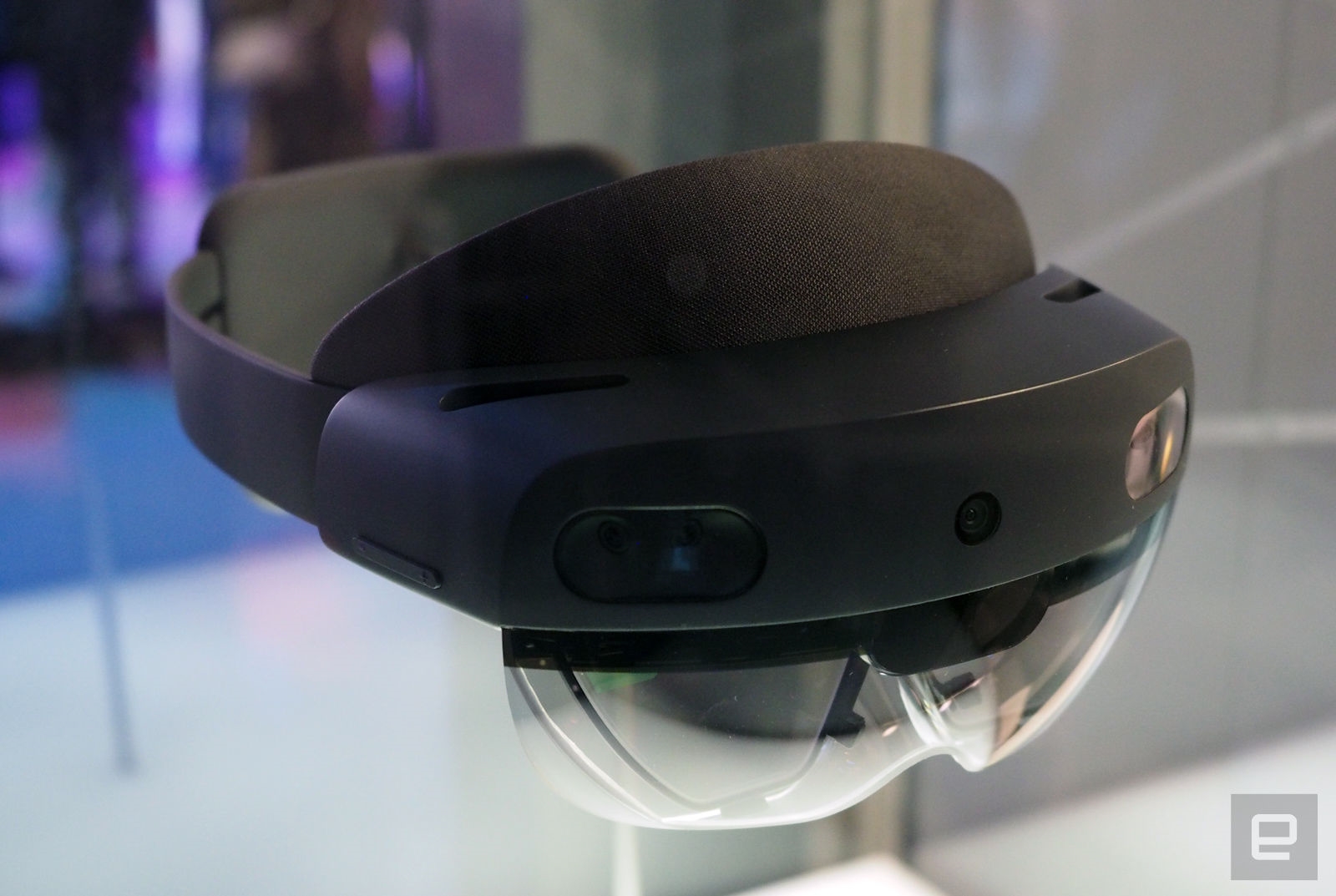 There’s just a single band that attaches the HoloLens to your head, while a brow pad around your forehead adds another point of support. This pad is removable and washable, for when the HoloLens is being used by multiple people. This might also be particularly apt for certain enterprise uses, such as in a hospital.

While the company has already revealed two augmented reality apps since the launch of HoloLens (Remote Assist and Layout) Guides is framed entirely on education and training — that sweet spot for enterprises and institutions. Further impressing how much Microsoft is trying to get out ahead and make these things actually work, it launches with a Guides PC companion app to help create interactive models, attach photos and videos.

The aim of the Guides app is to turn institutional knowledge into a repeatable learning tool that multiple students or trainees can use. One Microsoft spokesperson put it like this: a $3,500 headset is cheaper than flying an entire school of engineers to learn about the particulars of one engine.

HoloLens 2, then, is inarguably pitched at less people than the original, which is surprising. This time around, there are no Minecraft gimmicky demos, or Star Wars tie-ins. Microsoft knows that to make mixed reality truly land, it has to take a lesson from history. When computers and (or even microwaves) first appeared, they were expensive, niche curios; functional high-end devices that did something better than older tools, priced so that only companies could afford them. But then the technology evolved, the price went down, and the devices thrived. It’s what mixed reality needs if it’s going to move forward.