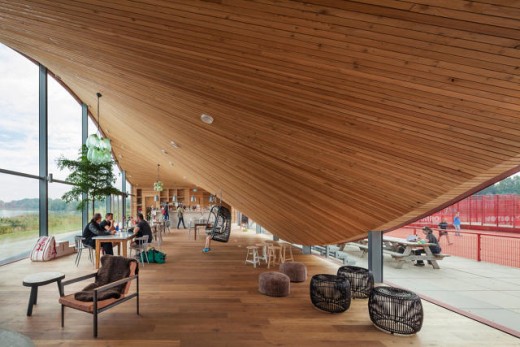 The Rotterdam-based architecture firm has turned the roof of a tennis club into spectator seating.

MVRDV, the Rotterdam-based architecture firm known for its bold, futuristic designs including everything from small town community centers to South Korean Skygardens to dazzling skyscrapers that look like Twizzlers, is now jumping into the sporting arena. Its latest design is just as much furniture as it architecture though: a comfy red tennis clubhouse that doubles as a seating area for over 200 spectators.

The new building is simply called the Couch, because of course it is. Located in IJburg, near Amsterdam, and built for the appropriately named Tennisclub IJburg, first founded in 2008. The tennis club already has a number of facilities, including 10 clay courts and a tennis school. But with the addition of the Couch, Tennisclub IJburg finally has not just a place to relax between games, but a place to watch them.

“With the Couch, we have integrated sport into society” says MVRDV co-founder and architect Winy Maas. “By turning the roof of the club-house into a tribune, a Centre Court is created. Here we celebrate the talent of the amateur players who are challenged to excel in front of the public. By covering the entire building in red polyurethane the club gains visibility: an advert for sports and movement. The essence of the building is the stimulation of fitness and the fight against obesity and inactivity.”

MVRDV developed the clubhouse together with a co-architect, Studio Bouwkunde. In execution, the building is reminiscent of Bjarke Ingels’s work on Copenhagen’s Gammel Hellerup School. For that project, Ingels used the roof of an undulating rec center and the school’s new arts building as common spaces for lounging around, eating meals, and watching sports. MVRDV’s take, though, looks warm and accommodating, like a pillow a giant sat on after deciding to sit and watch a tennis match for a spell. 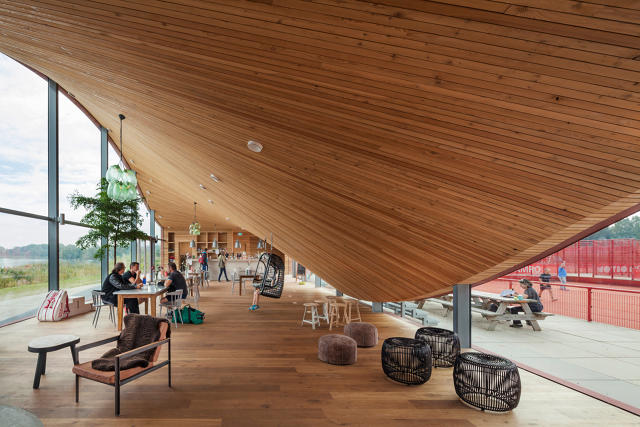