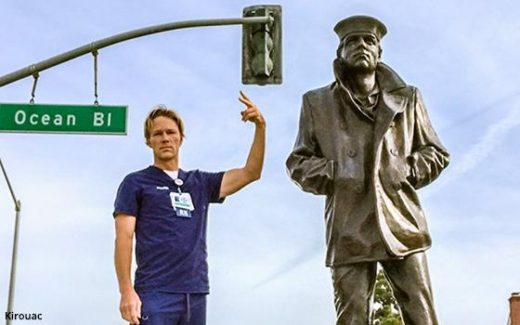 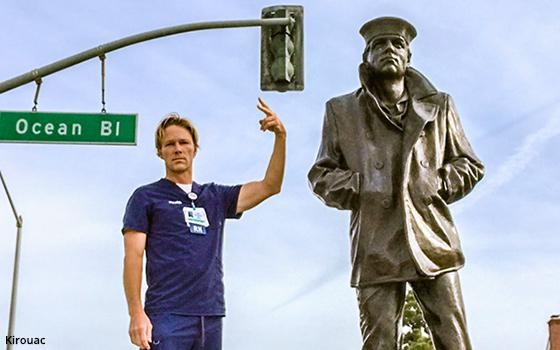 Facebook and YouTube have been used for marketing and advertising campaigns, but none as important as the public service messages developed by Joel Kirouac, a registered ER and trauma nurse and public health nurse, as well as former Navy corpsmen.

Kirouac, which is at high risk for complications if he contracts the disease, now works on the front lines fighting the COVID-19 pandemic and shares the knowledge he learns frequently with the community through a Facebook Live stream. He takes questions from community members and then answers them in the live stream. The topics related to the pandemic range from tips on exercise and nutrition to protecting ones’ physical body from the virus.

“I always wanted to be a nurse because I love to help people and have since I was little,” he said, explaining how he damaged one lung in a surfing accident in 2015. “I also was electrocuted by a power line when I was seven years old and spent a couple of weeks in the burn unit. I remember someone coming up to me to say, you know there’s a reason why you didn’t die.”

In his educated opinion, Americans cannot not yet go back to living a normal life. He said patterns teach you everything, similar to the way advertisers learn from data. The data gives people foresight.

The incubation time for COVID-19 is between two and fourteen days. That means the time it takes the virus to grow and start showing symptoms. From the time someone starts showing symptoms a new curve begins. People have an incubation curve and an infection curve. The virus will exacerbate any preexisting conditions such as a thyroid or heart problem. Most people get sick around the seventh or eighth day after they begin showing symptoms, not from the day of infection.  That can be a month from the time a person is initially infected.

He’s also trying to teach people that staying healthy and active in body and mind can lead to a speedy recovery if someone does get sick. People can freak out, he said.

“It’s a way to educate and update the public to help ease anxiety and woes,” he said. “The education I provide is not just for them, it’s for me as well.”

Kirouac is trying to prevent Los Angeles from going through a similar situation as New York, but said “we may have to fall on our faces.” He said people can go outside, but keep their distance and not touch anything that someone else might have touched in the past 30 to 40 minutes. Once people do this the U.S. will see a decline in cases. It appears the U.S. is more than a month away, but it’s dependent on us to cooperate.

“Let’s hope this summer burns this sucker up, because if it doesn’t we’re in trouble,” he said. “It all comes down to mental health and doing the right thing.”

He created a hashtag called #teachtoremember where he teaches to remind himself also to do the things he talks about. The goal is to spread positive words through health education and take the fake and convoluted or complex topics and make them simple to understand.

This humble ER nurse believes he’s no better than the next person and if he can educate others, he can educate himself and heed his own warnings by letting people know he’s in the same boat as them.

Nurses working in the ER learn a lot about human behavior. “Every patient comes in with a story and I have heard thousands of them,” he said. “If you’re smart you learn how to put together patterns and learn what they need to know.”