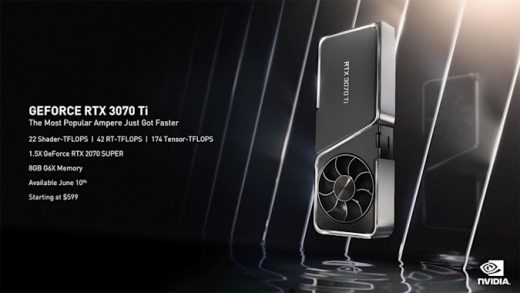 Let’s pretend, for a second, that the GPU market isn’t a trash fire of scalpers, miners and overpriced GT 1030s. Even in that alternative reality where you can buy a GPU without hassle, NVIDIA has some pretty large holes in its product lineup right now. Today at Computex in Taipei, a couple of those gaps have been filled by the RTX 3070 Ti and RTX 3080 Ti.

In gaming terms, the RTX 3080 Ti is a lot closer in spec to the 3090 than the 3080. All three cards are based on the same GPU — the GA102 — just with different numbers of active cores, divergent clock speeds and wildly disparate memory configurations:

We’ll have to review the 3080 Ti to discern its real-world performance, but we can do some basic math to get an idea of where the Ti sits. For rasterization — putting pixels on a screen — the RTX 3080 has 29.8 teraflops of power, the RTX 3080 Ti has 34.1 and the RTX 3090 has 35.6. (You derive these numbers, which aren’t really comparable to anything but RTX 30-series GPUs, by multiplying the number of cores by their max clock speed, and then multiplying that by the number of operations each core can handle per clock.) So, the 3080 Ti has about 96 percent of the power of the 3090, while the 3080 has about 84 percent.

*This figure isn’t actually the memory clock — it’s the effective memory speed — but who are we to argue with NVIDIA?

What does this all mean, then? NVIDIA has made clear that the target audience for the 3080 Ti is gamers. (Specifically, the press materials have lots of comparisons to the 2080 Ti.) That makes a lot of sense: you’re likely, in games, to get extremely close to the 3090’s performance, which, given the price differential, means the 3090 only really makes sense to professionals. That was already the case due to how well the 3080 performs, but there’s a certain type of gamer who can’t help but buy the best — the 3080 Ti gets so close that even they might be swayed.

The value decisions facing gamers now are pretty similar to when I was deciding to become a 2080 Ti owner last generation. Those looking for high-end performance at a somewhat reasonable price can pick up a 3080 at $699, the same price as last generation’s 2080, while idiots like me who are willing to pay 40% more for a tiny uptick in performance can grab the 3080 Ti in the same price range that the 2080 Ti launched in. Things differ at the rainbow-wrapped Aventador end of the equation, as the 3090 at $1,499 has the same use-case as the 20-series RTX Titan, which for some reason launched at $2,499. The 3090 is definitely a more viable “halo” card for flush gamers than that ever was.

For those who do own a 2080 Ti and want “the best” — so long as the best doesn’t cost $1,500 — the 3080 Ti will be a meaningful upgrade across the board. We don’t have real-world figures yet, but the 3080 already outperforms the 2080 Ti in almost every situation. Given the 3080 Ti has more memory than the 2080 Ti, those extremely fringe cases are over, and with the increased cores we should be looking at a large gap in performance generationally. For those with older flagship cards like the 1080 Ti or Titan Xp, the difference will be even more pronounced, although the 3080 still makes a lot of sense as a cheaper upgrade there if you can find one.

Let’s step out of our “mining isn’t a thing” bubble real quick to address hash rates: All NVIDIA gaming cards produced now, save the 3090, are “hash limited,” meaning they have their mining potential impeded as a way to dissuade folks from taking away GPUs from gamers. (Or, if we’re being cynical, as a way to sell mining-specific cards at a markup and prevent thousands of second-hand gaming GPUs flooding the market when they’re no longer viable for mining.) This doesn’t apply to older cards, as NVIDIA has promised it won’t retroactively nerf mining, but if you buy any RTX card that shipped from the factory after May— or either of the new Ti cards — it’ll have that limit applied, along with an “LHR” or “Lite Hash Rate” badge on the box.

NVIDIA had a torrid time with its first attempt to prevent mining on the RTX 3060, and nothing is unhackable, but if it sticks this time, the hash limiting should go a way to improving the current supply situation. Things aren’t going to get fixed overnight: The shortage has lasted so long, there’s pent-up demand that is going to outstrip supply for the foreseeable future, and scalpers are still gonna scalp. There’s at least a tiny glimmer of light at the end of the “a 2080 Ti just went for $2,500 on eBay” tunnel, though.

*NVIDIA hasn’t confirmed this specification yet.

Memory is upgraded from GDDR6 to faster GDDR6X, and bandwidth on the 3070 Ti is significantly higher than the 3070, which combined with the higher clock speeds should mean that the difference is likely to be more pronounced when it comes to gaming. How much more pronounced? We’ll see, but to point out the obvious, NVIDIA could sell a card at basically whatever price it wants right now anyway.

So, why is there so little difference between the 3070 and 3070 Ti? Much like the high-end cards are all based on the same GA102 GPU, the 3070 Ti, 3070 and 3060 Ti are all derived from the GA104 GPU, with active cores, memory configs etc. defining performance and price. The 3070 Ti effectively represents the best you can get from a GA104, with every core active and running at a high clock speed. The only way NVIDIA could’ve made the 3070 Ti stronger would have been to base it on the GA102, which is a far larger (628mm2 vs 392mm2) chip that costs NVIDIA more money.

Chip-making is at once precise and imprecise. This is over-simplifying slightly, but essentially if a GA102 chip has all of its cores then you’ll find it inside an RTX A6000 professional card, if things are almost-complete you have an RTX 3090, and if things are very-much-not complete you have an RTX 3080. Now there’s intent behind this, but the important bit is that the die size is the same for all of the cards, and with current manufacturing yields, the percentage of chips made that pass the 3080 bar is far higher than those going into the 3090, and the same is true going from 3090 to A6000. (That’s, in part, why an A6000 costs three times more.)

All of which is to say, the GA102 inside a 3080 has “lost” roughly 20 percent of its cores, so it’s likely that NVIDIA doesn’t really have a need to create an GA102 chip that’s worse than those found in the 3080. Speccing out a 3070 Ti equidistantly between the 3070 and 3080 would either mean taking chips with the potential to be sold inside 3080s and selling them for less money for no reason, or designing and fabricating an entirely new chip just to fill a $200 price gap with, which makes even less sense. With those options off the table, we’re left with the 3070 Ti NVIDIA announced today.

Side note: This is also the reason that, even if the oft-rumored 3090 Ti does come to pass, it’s unlikely to be crazy impressive. The 3090 has an almost-complete GA102 inside, so you’d only be able to add 256 cores and maybe 50MHz or so to the clock speed for a “Ti” model based on the GA102.

There have been rumors that we may see a mid-generation “die shrink” from 8nm to 7nm. This would let NVIDIA increase clock speeds and open the door to a 3090 Ti that’s a little more differentiated, or allow it to introduce a new range of cards across the board, perhaps marketed like last generation’s “Super” cards. NVIDIA hasn’t done a die shrink like that for many generations, though, and it clearly has no problems competing with its 8nm models, so any move to 7nm would likely be more motivated by supply constraints than wanting to introduce a new, ultra-niche GPU.

As usual, NVIDIA partners like ASUS, EVGA, Gigabyte, MSI and Zotac will have their own takes on the cards, at various price points and with slight adjustments to power consumption and clock speeds. We’ll update this article with details on partner card availability as and when that’s announced. When the time comes to try to actually grab one of these cards, it’s worth checking in with individual cardmakers such as EVGA, who have been piloting anti-scalping measures such as memberships in an attempt to make the lottery of trying to land a new GPU a little less random.

Richard Lai contributed to this report. 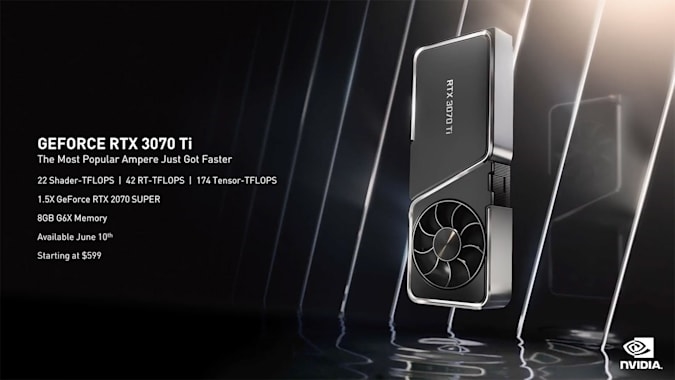