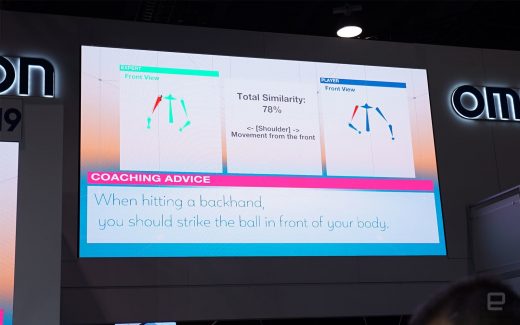 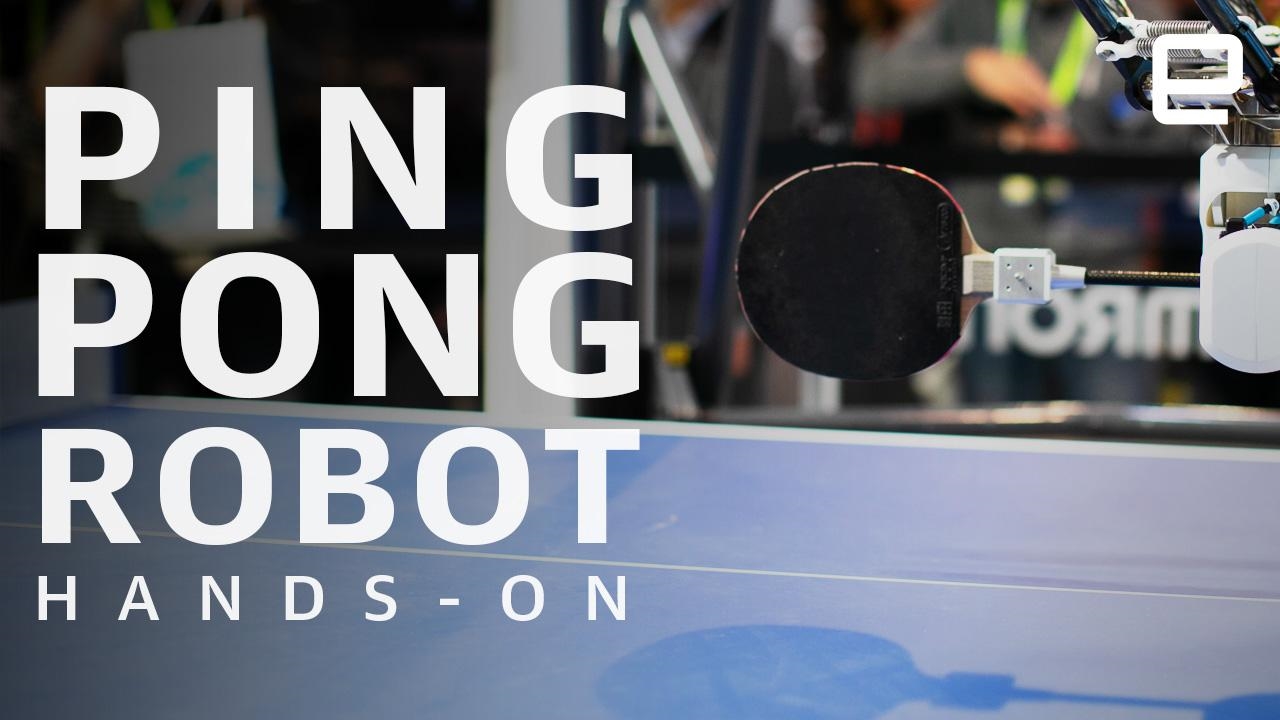 OMRON is best known for its healthcare products like thermometers and blood pressure monitors — now in the form of a smartwatch, even. But those who have been following our CEATEC coverage over the past five years may remember the company’s ambitious exhibit: the Forpheus table tennis robot. Little did I know that I would bump into this old friend here at CES. The machine is now in its fifth generation and packed with some surprising upgrades — let’s just say my parents would be disappointed in me if they were there.

Technically speaking, this latest Forpheus is actually an entirely new robot. While previous models tended to reuse a lot of hardware, this new one was apparently built from the ground up just to play ping pong. This is partly to (finally) accommodate a full-size table, but more interestingly, the main body is actually more compact than before, all the while packing five cameras instead of just three.

Specifically, two of those cameras are focused on tracking the ball, with another two on the human player, plus a high-speed camera on the racket. Additionally, the racket is dotted with green labels on both sides to aid the high-speed camera — that way Forpheus can easily identify the type of spin being applied to the ball. With this vast vision upgrade paired with OMRON’s latest automation platform, Forpheus is now much better at predicting the human player’s behavior.

Under the belly, there’s a new multi-axis robotic arm that can better mimic a human elbow and wrist, which turned out to be a major advantage for Forpheus: It’s no longer afraid of spins. But not only that, the bot can even hit back with its own topspins and backspins. The faster servo controllers obviously help a lot, too. 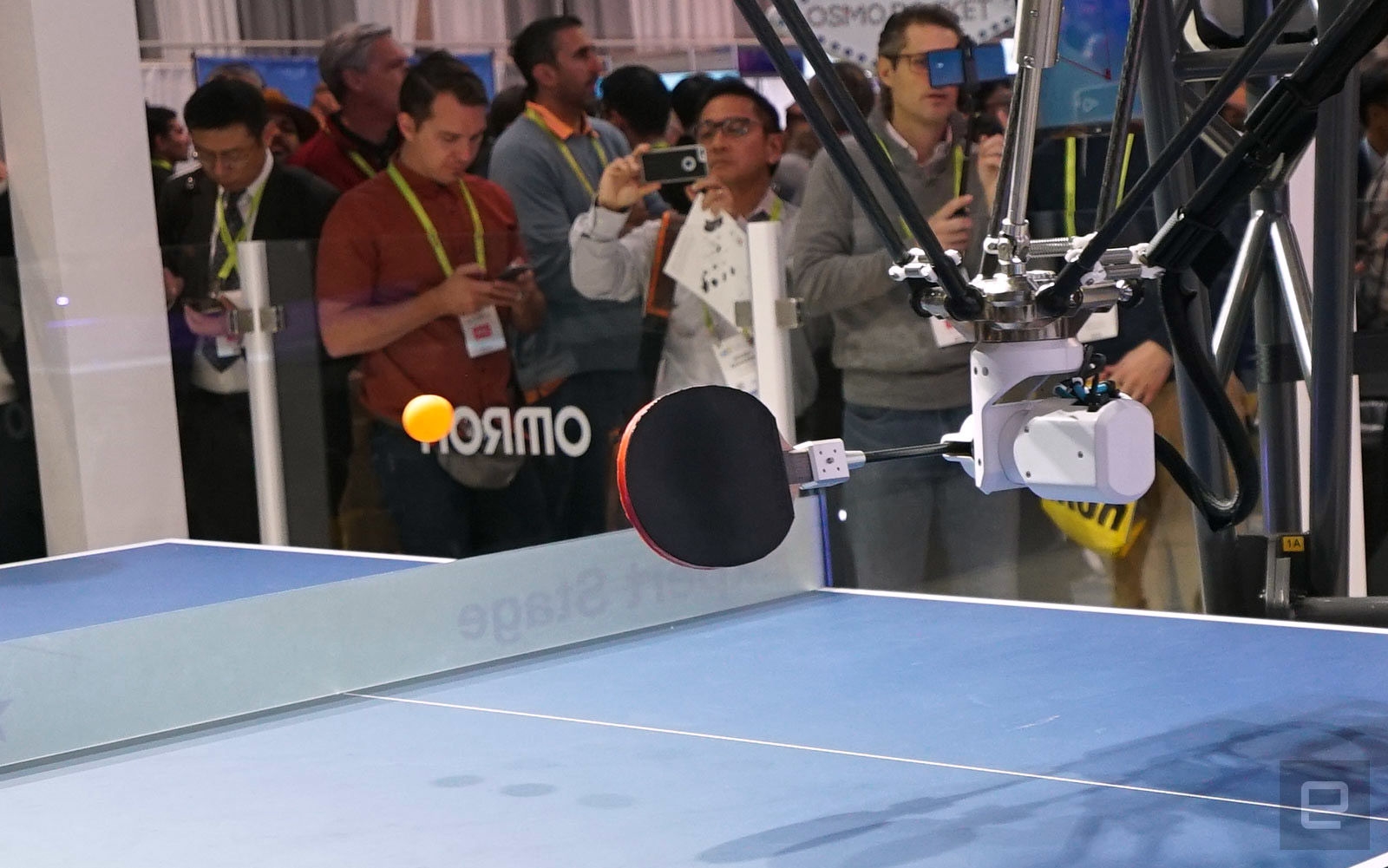 If you haven’t guessed by now, I let my fellow humans down in this ping pong match. I could blame the larger table, the wrong type of racket, my wrong outfit for the sport, or the fact that I didn’t sleep at all the night before (ugh); but the truth is, Forpheus was just too good.

During my last four encounters with the machine’s younger self back in Tokyo, I was asked by OMRON’s reps to refrain from delivering spins (it was something about keeping harmony between humans and robots), and it wasn’t until the fourth generation when it could finally take smashes. This new one though? My spins were barely effective, so I could no longer trick Forpheus with my sneaky serves. My rusty table tennis skills meant that I also struggled to handle some of the spins from the robot — they weren’t aggressive spins, but I was continuously thrown off by the fact that this dorky-looking thing could pull this trick off at all.

After my embarrassing loss, Forpheus was kind enough to provide some useful feedback as I mopped up my sweat. Instead of just giving a vague rating, this time the robot offered coaching advice by comparing my moves with a professional player, and this was illustrated with a stick figure animation for clarity. In my case, I knew I missed several opportunities to strike, and Forpheus implied that it was to do with my racket’s orientation. 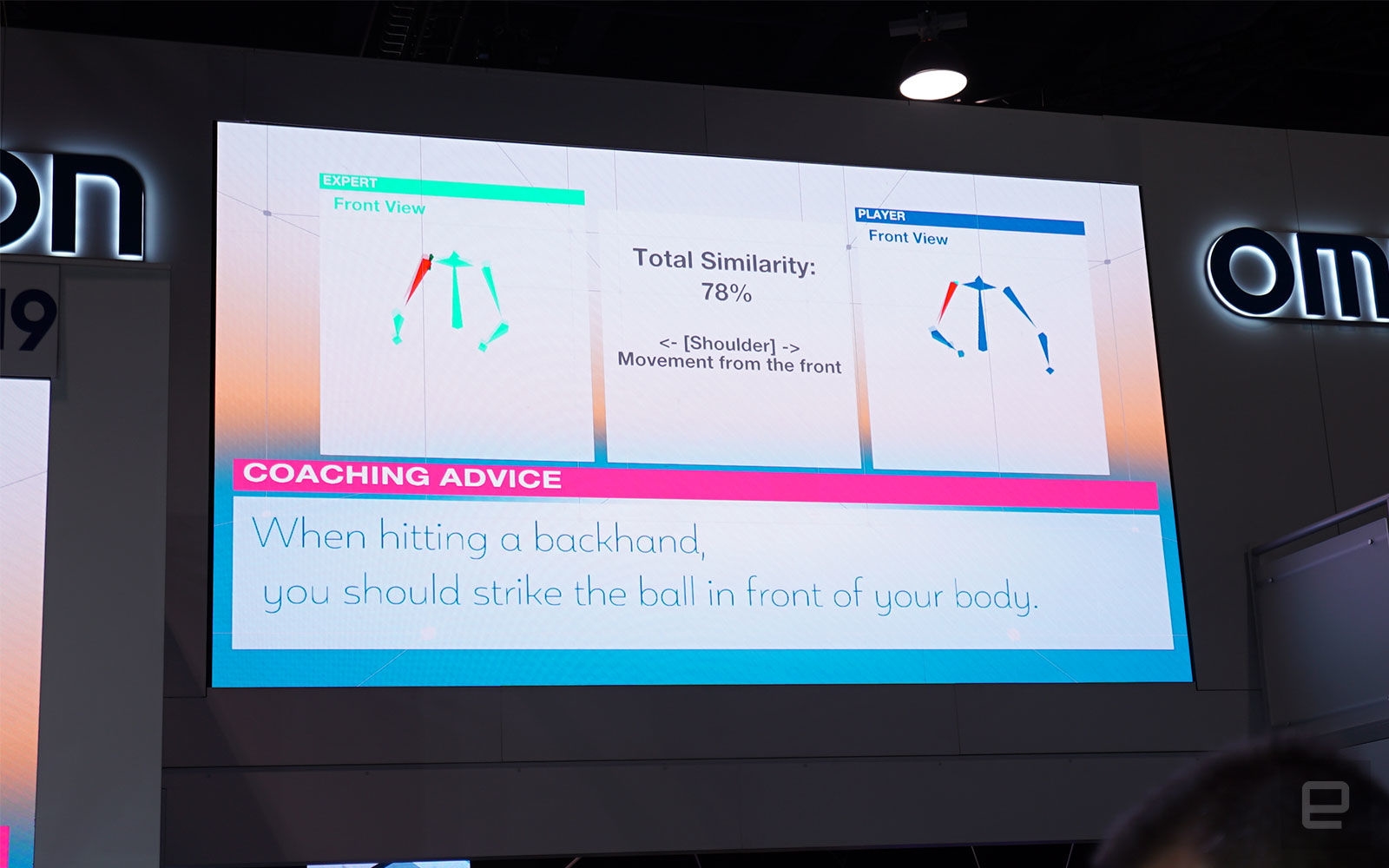 The on-screen report also indicated that my moves were 78% similar to that of a professional player which, according to OMRON’s rep, was pretty good — the highest score he saw at CES so far was a little over 80%. Still, I suspect the figure was somewhat inflated, but at least it looked OK on the giant display at OMRON’s crowded booth.

With the Tokyo Olympics coming up next year, you’d think OMRON would jump on this opportunity to promote its ping pong robot, but to my surprise, a rep was quick to say they have no plans to participate in the sports event. It’s also unclear whether OMRON would ever commercialize Forpheus. After all, the project has always solely been a showcase for the company’s industrial automation, mechanical design plus AI prowess.

As for me, I have my own upgrading to do before my next match with Forpheus. Just too bad that I can’t bring the machine home to practice with.