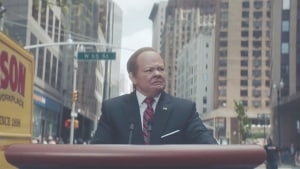 Like a hall-of-fame athlete hanging up his jersey, Sean Spicer–the Michael Jordan of scream-lying–has just resigned as White House press secretary. No more will Americans be assured (lately off-camera) that the president’s incendiary garbled tweets “speak for themselves.” Do you know who hasn’t retired, though? Melissa McCarthy.

Lorne Michaels, who is almost definitely reading this: please get her on the phone right now.

In a world gone utterly mad, there is only one rational thing to do at this moment: convene an emergency episode of Saturday Night Live and bring back Melissa McCarthy’s Spicey this very weekend. Everyone is enjoying a necessary break from Alec Baldwin’s Trump, and Anthony Atamanuik is killing it on The President Show, but no political impression is currently as in-demand as that aggressive, podium-riding rascal. Yes, the show is bringing Weekend Update to prime time next month, but that will be too late. Who knows if Earth will even exist in a month? This has to happen now.

So much has gone down since the SNL season finale aired a thousand years ago on May 20, there’s plenty of material to build an episode around. For instance, I would watch an entire 90 minutes just on the time when devout catholic Sean Spicer was not allowed to meet the pope–but Trump’s golf-caddy-turned-social-media-guy Dan Scavino was, only for a source from the White House to later drily quip about Spicer, “Wow. That’s all he wanted.” There’s also the time CNN brought in a sketch artist to draw Spicer, when media outlets were still settling into the new normal of not being allowed to film a briefing. Let’s face it; the possibilities are endless. Can SNL even afford not to explore them?

Sure, the show is coming off of its highest-rated season ever, riding a surge in public appetite for political satire, but things did not exactly end in a great place. SNL closed out its run this year certain that Trump was all but defeated—with much of the cast dressed as various members of the administration, crooning “Hallelujah.” Coming off the tumultuous week following Comey’s firing, things must have seemed optimistic. That instinct has since proven premature, however. The number of scandal cycles Trump has done a clumsy Electric Slide through in the interim is easily double-digits. If SNL wants to get a finger back on the pulse, it needs to start now, and it needs to start with Spicey.

More importantly, though: we need Spicey. To reiterate the point above, this summer has been a Dante’s Inferno of living nightmares—a crazy-making parody of Veep-meets-1984, but real. We’ve all been through a lot these past couple months. That kid from Room now looks like Merle Haggard. Just keeping up with the news (July 28, 2017) about Trump’s legal team shake-ups and attempts to discredit a special prosecutor felt like walking into a cockpit, midair, and finding no pilot. We could all use a break—preferably in the form of a surprise SNL with Melissa McCarthy resuming the sketch role of a lifetime one last time.

Do the right thing, SNL. The giant ball of wadded-up gum is in your court.

With today’s news of Sean Spicer’s resignation, I humbly request a special summer edition of “SNL” with Melissa McCarthy

Like a hall-of-fame athlete hanging up his jersey, Sean Spicer–the Michael Jordan of scream-lying–has just resigned as White House Press Secretary. No more will Americans be assured (lately off-camera) that the president’s incendiary garbled tweets “speak for themselves.” Do you know who hasn’t retired, though? Melissa McCarthy.