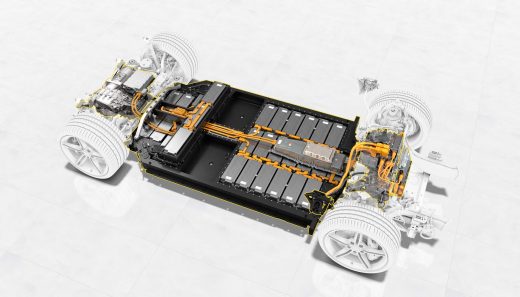 The Taycan EV takes Porsche into a new world of technology

At the end of the day, it’s still a Porsche.

We’re sideways. Again. After a blistering takeoff that pushed my internal organs towards my spine, the driver behind the wheel of the pre-production Porsche Taycan (pronounced “tie khan”) turns off the traction control and the vehicle does something other EVs don’t. It becomes a full-fledged sports car, its tires spinning on the edge — and spilling over — the traction event-horizon. We’re drifting and the driver — that also happens to be one of the regenerative braking engineers — tells me about how the Taycan recuperates energy back into the battery. Meanwhile, I’m smiling because a proper electric sports car is coming to market from a company with a history defined by fast cars.

There’s no lack of first drives and ride alongs of the Taycan. The automaker has been on a marketing blitz lately, making sure nearly every publisher has access to the car in one way or another. The overall verdict is that the Taycan is the pure electrification of Porsche’s DNA. The automaker has been using hybrid drives for years now in its race cars, sports cars and SUVs. Battery packs are nothing new to it. But ditching the internal combustion is something altogether different for the company, and it required a sort of rethinking of how a car is built the Porsche way.

When Porsche unveiled the Mission E concept four years ago it wanted to make sure that it was doing more than just showing off a design study. It wanted to announce to the world that it had every intention of creating a Porsche EV without compromise. A single concept car is tough to build, a production vehicle that deviates from your main source of propulsion is tricky and incredibly expensive. 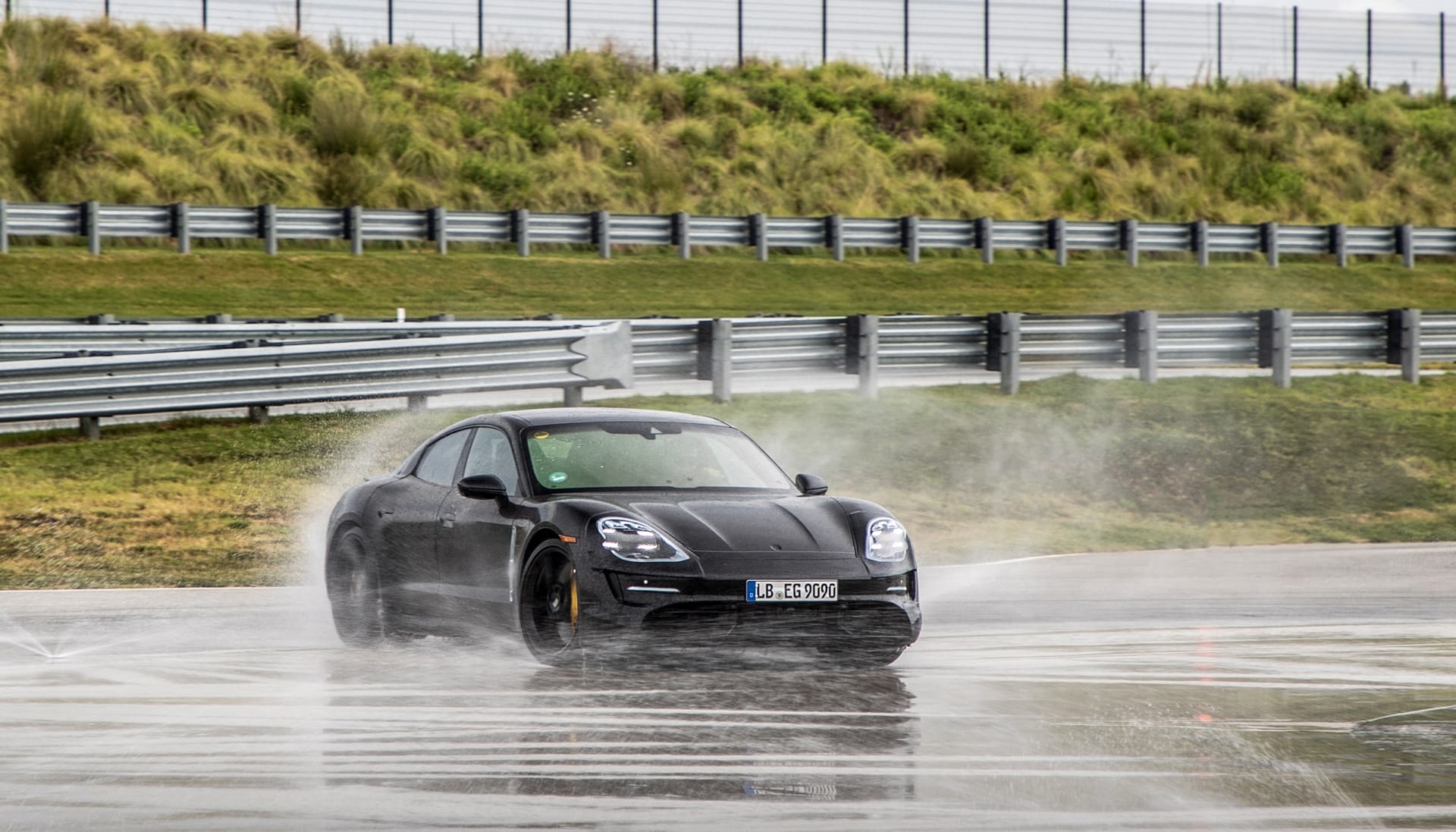 The automaker is spending six billion euros to develop electric vehicles. That money includes making huge adjustments to its factory in Stuttgart, Germany. That involves, among other things, a new assembly line, body and paint shop in the already crowded facility. Unfortunately, those two new areas require a conveyor belt to move the vehicles from one area to another. Porsche says that line is 911 meters long, because of course it is.

“(It was) something like an open heart surgery. But as of today, we can say it was successful. We’re currently ramping up the production,” Porsche VP product line Taycan Stefan Weckbach said.

The result is a vehicle that, even from the passenger’s side of the vehicle, feels like a Porsche sports car. Meanwhile, the driver is doing a donut while simultaneously explaining that the Taycan does not have “one-pedal” driving. He’s referring to the ability to take your foot off the accelerator and let the regenerative braking bring the car to a stop. “It’s not how you want to drive a sports car. You want consistency when you take your foot off the pedal,” he says. So when you stop giving it power with your foot, the car glides until you step on the brake.

As you depress the brake, it initially uses the motors to slow down the vehicle then switches to the actual physical brakes if you need additional stopping power. During this spirited ride, we need extra stopping power, and I watch the charge meter in the dash fill up to indicate we’re generating up to 265 kW when slowing down from the launch-control enabled burst of speed. It’s an impressive number, but not something I can test in the passenger seat as we once again whip around the corner and let the backend break free. 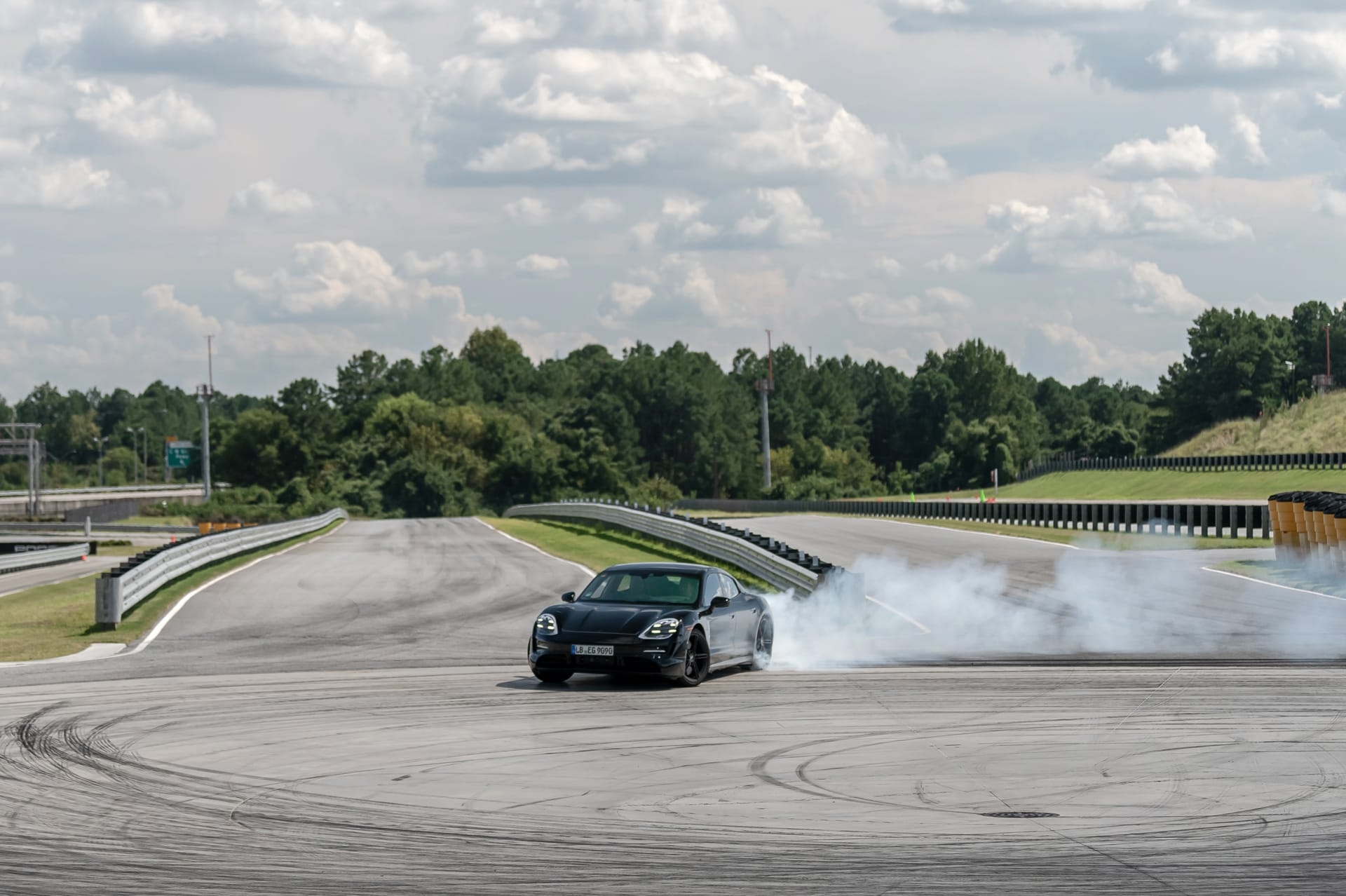 While going all out with tires smoking and skidding around corners in the Taycan is fun (even if you’re not driving) Porsche’s all-wheel-drive system is built to keep the car stuck to the road. Which is how these cars will be driven most of the time. Ahead of the squealing tires, the vehicle’s torque vectoring did a fine job on a water-slick road, adjusting the power in-real-time to all four tires to increase traction. One of the benefits of electric vehicles is that they can adjust the energy and spin of the wheels in almost real-time far better than an internal combustion engine vehicle.

But what Porsche has that others don’t is a two-speed transmission connected to the rear motor. Typically, EVs have a single gear. But Porsche wanted something with a lot of torque. So it added a low gear to propel the vehicle quickly and repeatedly. The top-end Turbo S version will do zero to 60 in 2.6 seconds. The Tesla Model S P100D will do that in 2.5 seconds. But the Porsche can do it over and over again (10 times in their tests) without any significant power loss.

The Model S P100D is impressive, but it’s not a sports car. Porsche built its reputation on the race track, reproducing high-speed launches over and over again. That’s something the company needed to do, even if just for the sake of its reputation. 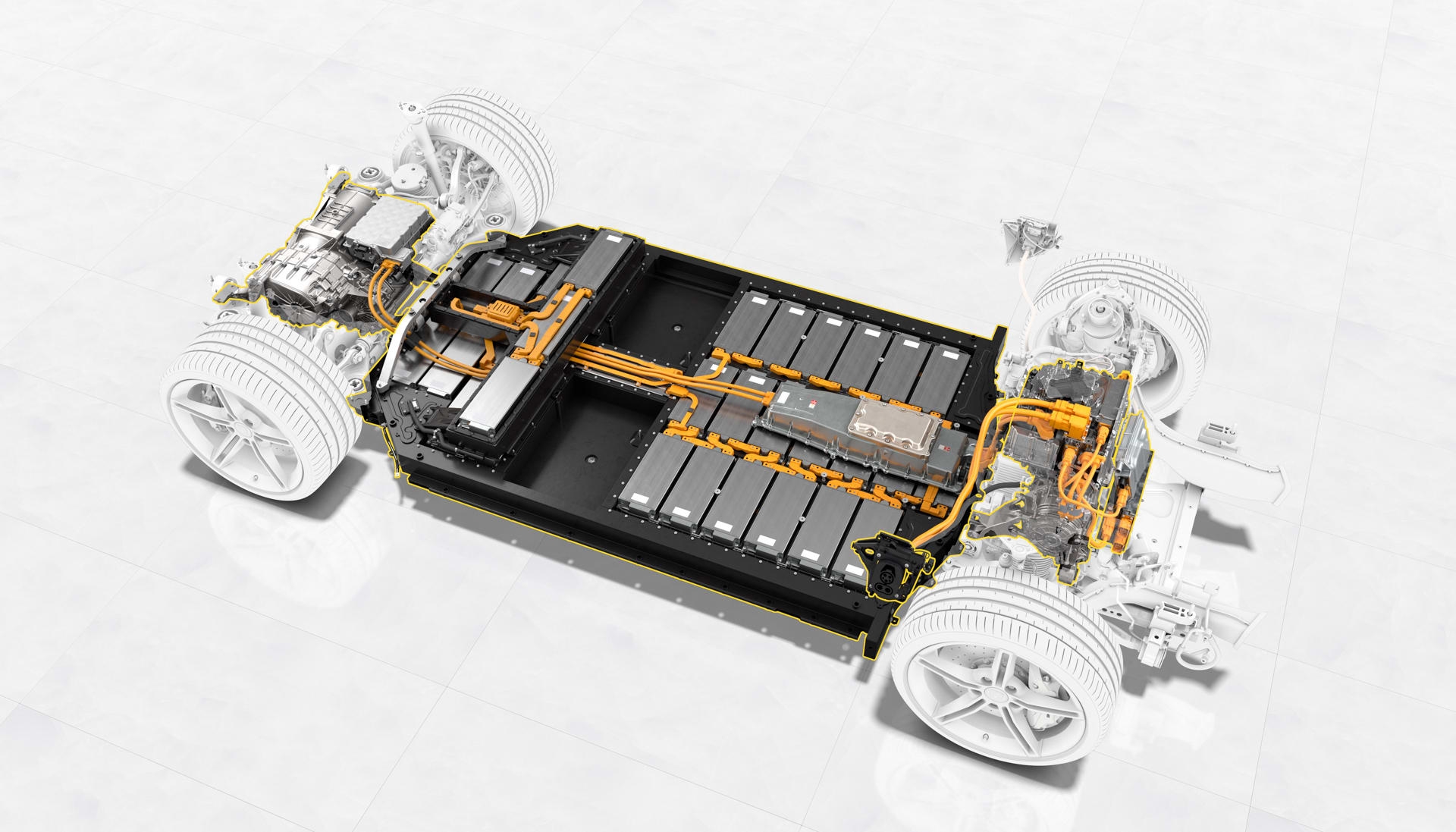 The electrical system meanwhile is 800 volts instead of the typical 400 volts. That means the vehicle can charge faster, produce more power, and use thinner wire to reduce weight. To further efficiency the Taycan uses two permanently excited synchronous motors (PSM). Instead of winding copper wire, the copper is shaped like hairpins, inserted into the motor and the ends are laser welded together. The result is a more complex motor, but one that delivers more power in the same size package.

Keeping all that ready for a day at a track requires a quick charging and Porsche gave the vehicle the capability to charge from five to 80 percent in 22.5 minutes using a high-powered charging station that goes up to 270kW.

Nearly everything on this car is there to create the feeling that, even if you’re driving an EV, you’re really driving a machine built for speed and handling. Yet it still has some unique touches. 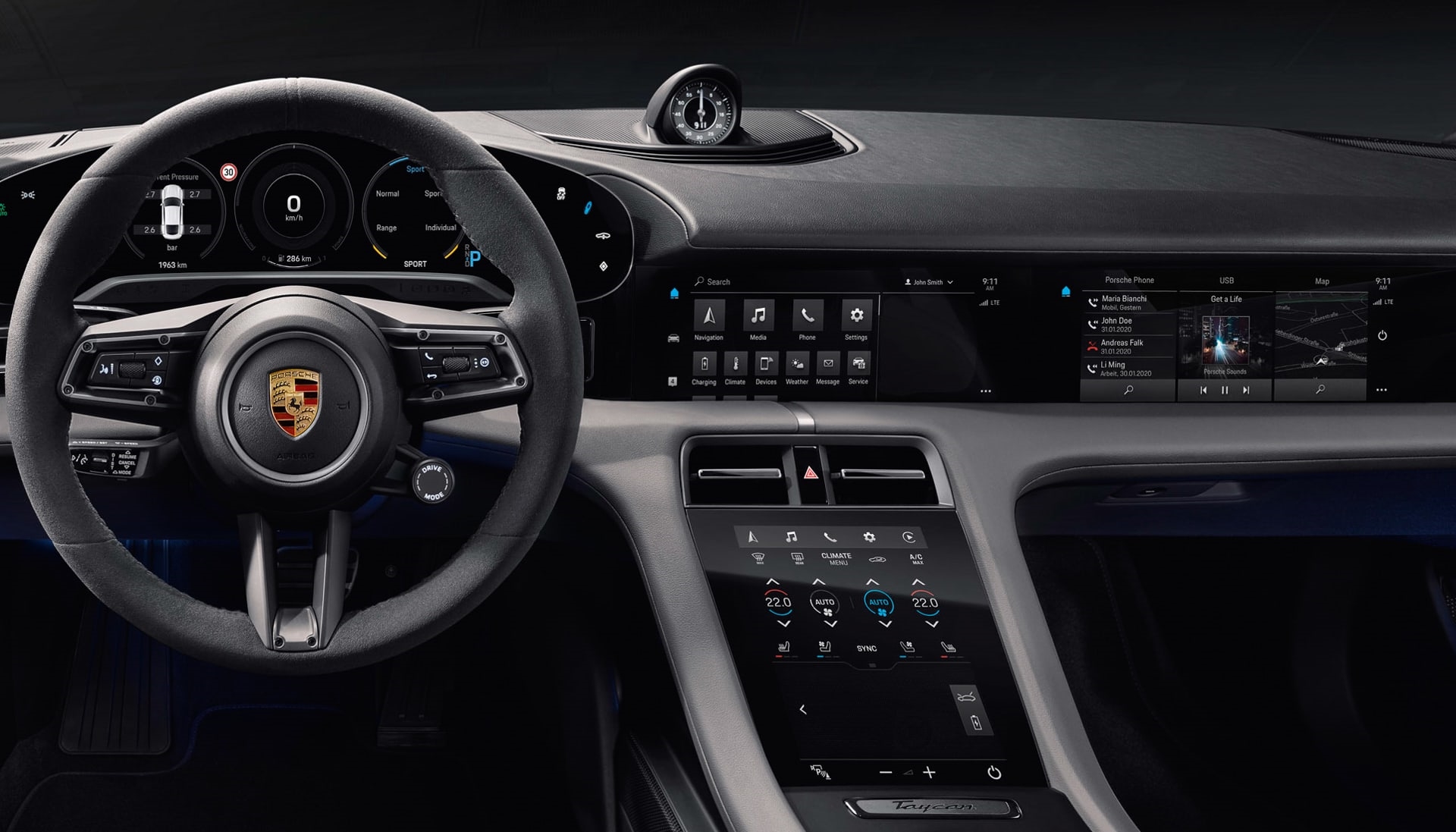 For example, the charging port cover retracts and goes up. That’s kinda neat. Impressively though, it’ll do that even when it has a sheet of ice. The system will try to open the little door and if it notes resistance, it’ll add some more torque to break through the frozen water.

The interior has the feel of a 911 but all of the displays are digital. That includes the one for the passenger that can be used to not only control music but make changes to a route. Ferrari 812 Superfast has the same thing but the navigation controls are limited. Does the passenger need their own touchscreen? Probably not, but is it weird/cool? Yeah, yeah it is.

All this tech is cool, but also expensive. The Taycan Turbo will start at $153,310 at launch and the Turbo S will set you back $187,610. They are Porsches, after all, and they’re a few grand cheaper than 911 Turbo and Turbo S respectively. Vehicles should start being delivered by the end of the year with those that have put down an early deposit getting first dibs. According to Porsche, of the 20,000 people worldwide that have expressed real monetary interest in the car, 50 percent are new to the Porsche brand.

That’s all well and good because a lot of work has gone into the vehicle. According to Porsche North America CEO Klaus Zellmer the Taycan is “the most ambitious and technically advanced Porsche ever created.” 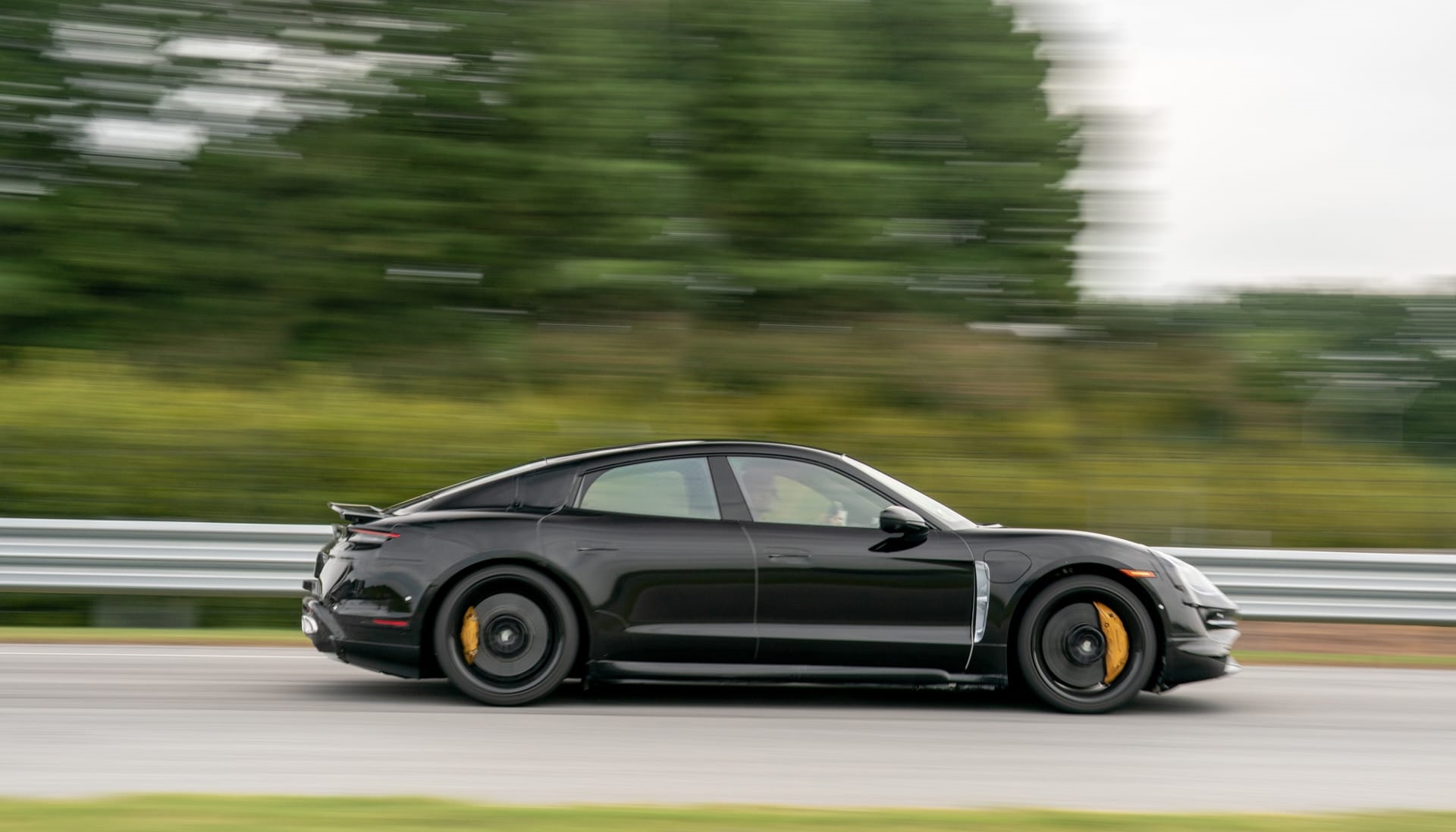 The Taycan signals a new era for Porsche. Going electric is tough and arriving at that destination with its sports car DNA intact is impressive and required a lot of tech and money. But all that means that that eventually, I can ride a battery-powered Porshe sideways around a corner it’s worth it.