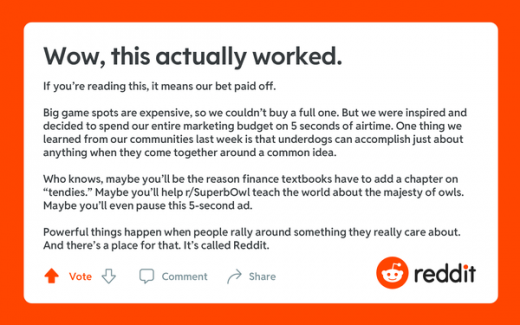 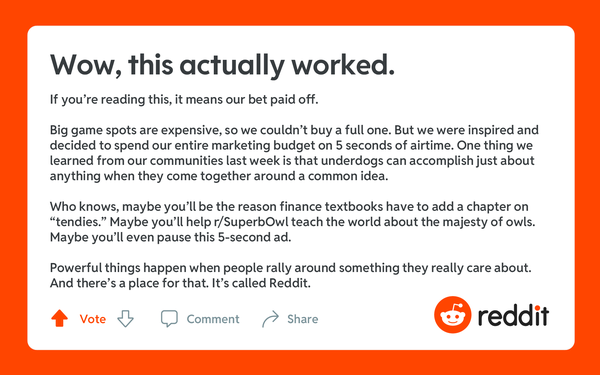 The static ad lasted five seconds and was not part of the company’s 2021 advertising plan or budget, but rather a last-minute decision that Reddit created in collaboration with R/GA’s California office.

“Our Super Bowl ad was not part of our marketing plan or budget, but we were so inspired by the power of our communities in recent weeks that we rallied to pull it together in just a few short days,” Reddit CMO Roxy Young wrote in an email. “We think it beautifully captures the heart of Reddit in our unique and brilliantly absurd tone.”

Reddit stock traders rallied around GameStop and other companies in late January, catapulting on a stock price for GameStop of $347.51 per share on January 27. The stock traded at about $10 per share in October.

This demonstrated the power of the internet and social media, not only for the GameStop stock, but for others such as AMC, BlackBerry, and Macy’s. Mostly young day traders on Reddit fueled investments hitting on millions of dollars, as Wall Street lost billions.

“Wow, this actually worked,” according to Reddit’s message in the ad. “If you’re reading this, it means our bet paid off.”

Super Bowl fans paying attention to the ads would not have been able to read the message unless they paused the ad.

The rest of the message went like this: “One thing we learned from our companies last week is that underdogs can accomplish just about anything when they come together around a common idea. … Powerful things happen when people rally around something they really care about. And there’s a place that for. It’s called Reddit.”

It was so powerful that the rights to a movie based on the events are in the works. MGM acquired the book proposal “The Antisocial Network” from New York Times best-selling author Ben Mezrich. This book will look to tell the story of “a ragtag group of amateur investors, gamers, and internet trolls who brought Wall Street to its knees.”

One media outlet reports that two movies, one television show, and one documentary are in the works.