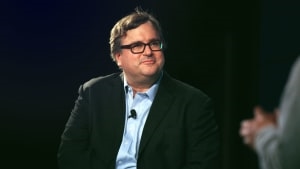 Last year, LinkedIn added a freelance marketplace called ProFinder, where businesses and individuals can seek out services ranging from web design to public speaking. And while there are currently 70,000 freelancers on the new network, LinkedIn cofounder Reid Hoffman sees it getting much bigger–eventually.

In an exclusive interview with Fast Company, Hoffman explains why he’s expecting it to take a while to scale up the freelance platform, and shares his take on why the freelancers who use ProFinder don’t seem to be worried about the threat of automation in the near-term.

(The following conversation has been condensed and lightly edited for clarity.)

Fast Company: So far, what have been the top industries that are hiring freelance workers through LinkedIn ProFinder?

Reid Hoffman: We have substantial traction within classic things . . . on LinkedIn like career coaching. But we also have good results in design and accounting. We had this really interesting tax season by which [ProFinder users were able to] find good tax services. We started with four categories, and now we’re at 140.

FC: How do you ensure clients are getting quality workers and vice versa?

RH: “Ensure” may be a little strong, although we’ve been doing a better and better job at it. But . . . we actually have a bunch of information about who both the client and service provider are, how they’re connected, what their skills look like . . .  We have a history of how you’ve been interacting on ProFinder: Have you responded to bids like this before? How did that process work? Did it end up with you being hired? All of those things–just like a search algorithm, which accounts for a whole bunch of different factors.

FC: There are several freelancer platforms cropping up that connect the best freelancers with top-tier clients. Is that level of curation something you’re thinking about?

RH: Right now it’s can we get the formulas right to scale? First, you do hand-crafted things to set up to scale. We’re still in that hand-crafting phase, and this can take some time for these businesses [like ProFinder that are just] building up. But that’s part of discovering the thing that can change millions of people’s lives. For example, it took 468 days for LinkedIn to get to its first million registered users.

FC: Another thing that’s important to freelancers is getting paid on time and having access to benefits. Do you foresee ProFinder playing a role in either providing or connecting freelancers with those kinds of services?

RH: [ProFinder] will be focused on referential information to help make connections and make the right choices. So it would be unlikely that we would offer those services directly ourselves. But we would use the fact that we have this whole network of professionals who we can ask, “Which [service] works? Is this good for you?” and [then] say [to our wider network], “Here’s what the options are for you, and here are the ones that people like you have liked more,” and that kind of thing could be something we could consider in the future.

Building interesting marketplaces takes a long time. I invested in Airbnb a long time ago–2010 I think–and it took years to get to [its current scale]. So–and I partially say this both as truth but also as a set of useful expectations–this will take years to compound into something interesting, but when it does get there it will be super interesting.

FC: ProFinder released results from a freelancer survey on Thursday that found only one out of five freelancers on the platform are concerned about artificial intelligence (AI) coming for their jobs within the next 10–20 years. Why do you think that is, considering how widespread fears about workforce automation seem to be?

RH: AI as a massive threat to jobs is still in some ways years off in different areas and different zones. A key part of freelancing is establishing a quick connection with a customer or a client, and then figuring out the job and working on it and so forth. AI is probably not a factor in that.

[Another] key thing that most freelancers are looking for is [that] they want this year to go well. They’re working towards acquiring a stable group of clients. That’s actually the top threat, versus, “Oh yeah, maybe there’s some new technology that’s coming down the pipe that could change the landscape.”

RH: Yeah, those things are kind of prototype production stuff at the moment . . . The real question is, well, what percentage of your ad copy is coming through Watson? The percentage of the overall production–that’s not a high number yet.