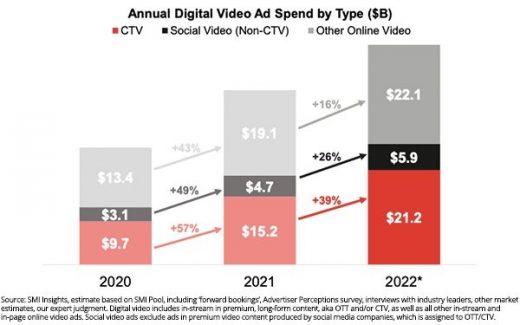 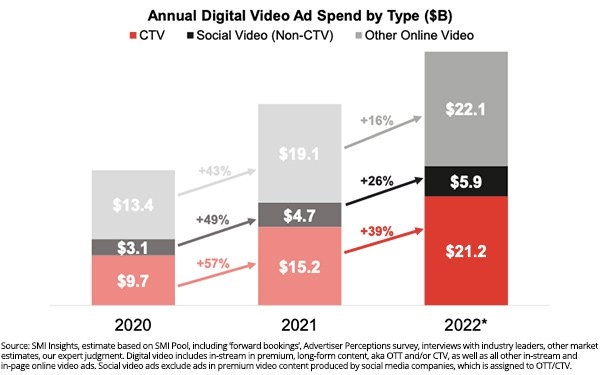 Although it will have a 36% share of total video time spent, connected TV (CTV) will take only 18% of total video ad dollars in 2022 and is estimated to reach $21.2 billion by year’s end, per a

Data estimates were calculated when including all CTV, linear TV, social and short-form video ad spending.

The report estimates average time spent per day in 2022 for CTV to be 1 hour/44 minutes, with linear TV at 3 hours/2 minutes, according to eMarketer January 2022 data.

While CTV will have a 18% share of total video ad spend in 2022, linear TV will come in at 57% and all other digital video will have a 25% share, according to Standard Media Index. The data for the report is based on the “SMI Pool,” which includes “forward bookings.”

Advertiser Perceptions interviewed 406 executives who spent at least $1 million on advertising in 2021, in a 15-minute anonymous interview during the period from February 15, 2022 to March 15, 2022.

SMI captures between 70% and 95% of all media agency spend, with data coming from raw billing records of all media transactions. This includes television, digital, out-of-home, print, and radio.

Advertiser Perceptions is a research and intelligence firm for advertising, marketing and ad-tech businesses.

The IAB survey says 73% of buyers are expected to shift their media spend from linear TV to support their increase in CTV and OTT ad spend.

Streaming TV platform Roku announced it has expanded its Measurement Partner Program to include media mix modeling (MMM) so advertisers can fill in the measurement gap between older media and the growing streaming landscape.

What it does. Media mix modeling is currently available on Roku through an existing partner, marketing research company IRI. MMM allows brands to track and measure ad performance at the campaign level and then allow advertisers to adjust their budgets accordingly.

Roku’s MMM capabilities also allow advertisers to control for various factors that affect performance, including weather events and seasonality. Additionally, given IRI’s deep knowledge of retail intelligence, it can even account for shelf organization within stores.

Consumer packaged goods brands, as a result, aren’t just looking for a big splash at the top of the funnel. Instead, they can manage the reach and traction that ad impressions are making on users and households watching Roku.

Why we care. This expansion of the measurement program comes ahead of Roku’s first in-person upfront in New York, on May 3. As ad veterans know, upfronts are the traditional way that brands have locked in linear TV inventory for ages. Streaming services like Roku are joining this traditional cycle, but they still have to enable advertisers and agencies the opportunity to prove the impact that streaming has and compare it to other media in their budgets.

Wayne Friedman is West Coast Editor of MediaPost. You can reach Wayne at wayne@mediapost.com.