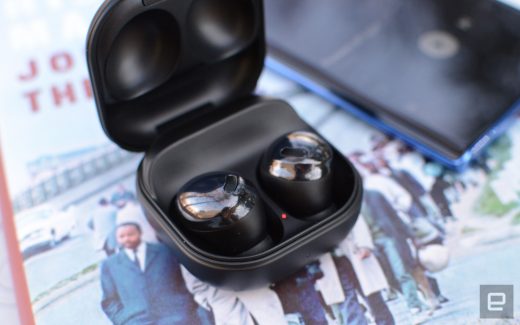 When the rumors began to swirl about Samsung’s Galaxy Buds Live, the promise of active noise cancellation (ANC) led me to believe the company was finally addressing a key omission from its lineup. However, those earbuds would ultimately offer an “open type” design that doesn’t seal your ear canal entirely. So while ANC was there, it wasn’t particularly effective. Enter the Galaxy Buds Pro ($200). Samsung’s most complete earbuds pack in ANC, 360 Audio and a host of handy features and mount a convincing case against Apple’s AirPods Pro. The Galaxy Buds Pro isn’t as clear a bargain as other Galaxy Buds, but Samsung does have a lot to offer here.

There’s no question Galaxy Buds Live have a unique design. And one that inspired a host of memes. Their shape allows them to sit securely in the curves of your ear while sitting outside of the ear canal, but there’s nothing that actually goes into your ear. With the Galaxy Buds Pro, Samsung combined the subtle curves from the Live with the small stature of original Galaxy Buds. The result are tiny earbuds that are comfortable despite a tip that goes into and seals off your ear canal. 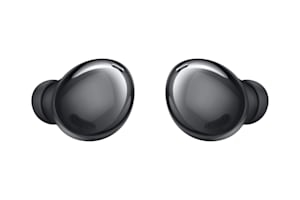 Another design cue from the Galaxy Buds Live is the Buds Pro’s glossy exterior. The outside of each earbud has a shiny touchpad that accepts your taps and presses to control music and calls. The underside has a matte coating that’s colored to match the outside. Lastly, Samsung opted for the same case shape from the Galaxy Buds Live. The Buds and Buds+ both came with an elongated, pill-shaped holder.

On the outside two microphones are visible, and the one closest to your face is covered with what Samsung calls Wind Shield technology. The overall design of earbuds tuck in your ear better, so there’s less opportunity for the external mics to catch a breeze. And the mesh-covered Wind Shield chamber further reduces any weather-related issues. Combined with the other outer mic and a third one on the inside, those components work together to block out noise as part of the ANC setup.

If you’re looking for a workout partner, the Galaxy Buds Pro can certainly withstand sweat. They’re IPX7 rated water resistant, which means you can submerge them in water (up to 1 meter) for up to 30 minutes. The charging case is not water resistant, but the earbuds offer the highest water resistance for any Galaxy Buds yet. I haven’t tested this, as I needed to make sure I had a working unit to complete this review, so I wasn’t going to take any chances.

Like previous Samsung earbuds, the Galaxy Wearable app is where you configure all of the settings for the Galaxy Buds Pro. It provides battery life info right at the top so you don’t have to go searching for it. The Noise Control section is also prominent, and it’s here that you can switch between ANC, ambient sound or turning them both off entirely. Samsung gives you two options for noise cancellation, high and low, as well as four options for the amount of environmental noise you want to let in. Lastly, this section allows you to disable voice detection, the feature that automatically lowers the volume and switches from ANC to ambient sound when you begin to speak.

The app is where you can disable the touch pads on the earbuds if you need to do so. And since you can reconfigure the touch-and-hold gesture, the Galaxy Wearable app is where you’ll do that too. Samsung doesn’t give you a ton of options here, but you can swap out the default noise control (switches between ANC and ambient sound) for a dedicated voice assistant button, volume controls (up on the right, down on the left) or one-touch access to Spotify.

Per usual, Samsung gives you access to some additional features in the Labs section of the app. This is where you’ll find the low-latency Gaming Mode. Under Advanced, you can enable/disable hands-free Bixby (Bixby voice wake-up), the automatic switching to other devices on your Samsung account or adjust the left/right audio balance.

Samsung offers the ability for you to locate lost earbuds with the Galaxy Buds Pro, via SmartThings Find. That app can assist even if the buds are disconnected from Bluetooth or offline. SmartThings Find provides a map with detailed directions and can play a ringing sound to help you track down the buds.

During its introduction of the Galaxy Buds Pro this week, Samsung spent a lot of time on its two-way speaker design. The company says these earbuds have “the most comprehensive sound” in its true wireless lineup so far. After spending a week with them, I can tell you that’s certainly true. Inside, an 11mm woofer handles the low-end while a 6.5mm tweeter keeps the highs crisp and punchy. The result is a wide soundstage with real depth and solid clarity.

Vocals are crisp and cut through even the most chaotic genres like prog rock and metal. TesseracT’s Sonder, for example, has an open, atmospheric quality to the bombastic drums and droning guitars. When testing with the Note 10+, that progressive metal sounded huge, not in the least bit compressed like some earbuds tend to do. The results aren’t quite as good when I jump to my MacBook Pro, but the sound quality is still solid. And with other genres, details shine through, with ample bassy thumb when a track calls for it.

Thanks to the ear tips on the Galaxy Buds Pro, the ANC actually makes a difference. It blocks out constant background noise like a dishwasher or fan. Like most ANC setups, it won’t completely cancel out someone’s noisey Zoom call, but it’s better than nothing.

Inside the Galaxy Wearable app, Samsung offers a selection of audio presets if you need something besides the default tuning. There’s no manual EQ here, so your options are limited. And based on my experience, the sound the company gives you out of the box works best for most genres anyway.

To take on Apple’s spatial audio on the AirPods Pro, Samsung offers a 360 Audio feature on the Galaxy Buds Pro. It works similarly to what’s available on Apple’s fanciest earbuds. Built-in accelerometers employ Dolby Head Tracking tech to create more immersive sound with Dolby Atmos content. The idea is to mimic surround sound by keeping the audio in the same spot as you turn your head, so you can “feel” which direction it’s coming from.

Unfortunately, I wasn’t able to put this to the test. 360 Audio will debut alongside the S21 lineup that was just announced this week. It will be available on Galaxy devices with the One UI 3.1 or above. When it arrives, it will be accessible through the Advanced tab in the Galaxy Wearable app.

As always, Samsung is hyping call quality on its latest earbuds. A lot of companies do this, but ultimately deliver mediocre results in practice. Samsung says the Galaxy Buds Pro can separate unwanted noise via a combination of three microphones and an accelerometer, or Voice Pickup Unit (VPU). What’s more, the company explains that one of the outer mics is set with a high signal to noise ratio (SNR) to focus more on your voice rather than any background chaos.

When I tested this, the person on the other end said I sounded like I was on speaker phone — a common assessment for using earbuds to make calls. They said they could hear background noise, but it never drowned out my voice. They were quick to note I just sounded “fine,” not exactly crisp and clear.

As previously mentioned, Samsung has also equipped the Galaxy Buds Pro with Wind Shield tech that should help you sound your best when you have to take a call outdoors. Unfortunately, we’ve had no wind in North Carolina in the last week, so I haven’t been able to test this. However, wind noise can be devastating to call quality on headphones, so even a small improvement here would be helpful

For all the things Samsung overstates, the company nailed the battery life estimates. It says you’ll be able to listen to the Galaxy Buds Pro for up to five hours with ANC and hands-free Bixby turned on. During my tests, I nearly hit that mark right on the dot each time, plus or minus about five minutes. When you factor in the charging case, you’re looking at up to 18 hours of total listening time.

If you need to eek out a few more hours, turning ANC and the Bixby voice cues off will allow you to push these earbuds to 8 hours, or 28 hours total with the case. What’s more, Samsung’s quick-charge feature will five you an hour of listening time in five minutes. Lastly, the Galaxy Buds Pro case is wireless charging compatible — whether that’s on a pad or mat, or even on the back of a Galaxy device with Power Share.

It’s clear Samsung is taking aim at the AirPods Pro here. I mean, it named this model the Galaxy Buds Pro after all. Price, features and sound quality all line up with Apple’s premium option of its popular earbuds. Due to the addition of ear tips, the AirPods Pro are more comfortable than the base model, and the core features of hands-free Siri, quick pairing and wireless charging are all there. The AirPods Pro also offer automatic device switching and spatial audio, so if you’re looking for something more than a lot of other earbuds can muster in terms of immersive sound — and you’re an iPhone user — these are worth considering.

In terms of a total package, Sony’s WH-1000XM3 are still my top pick. Since their introduction in 2019, few companies have come close to offering the mix of audio quality, noise cancellation, customization and features that Sony does on its flagship model. For those who are primarily concerned about sound quality, Sennheiser’s Momentum True Wireless 2 are the best option. They’re more expensive, but when it comes to pure audio chops, the company has nailed the formula of clarity, detail and tuning for the tiny in-ear devices.

The Galaxy Buds Pro are Samsung’s most complete set of true wireless earbuds yet. Unfortunately, they’re also the most expensive. The sound quality is the best of any Galaxy Buds device thus far and truly effective ANC works well. Features like hands-free Bixby, automatically switching to ambient sound when you speak and wireless charging round out a compelling package. The Galaxy Buds Pro will need that 360 Audio in order to fully compete with the AirPods Pro, but it’s coming soon. With this set of features, fans of the Samsung Galaxy series finally have a premium audio accessory to match their tech-filled phones. 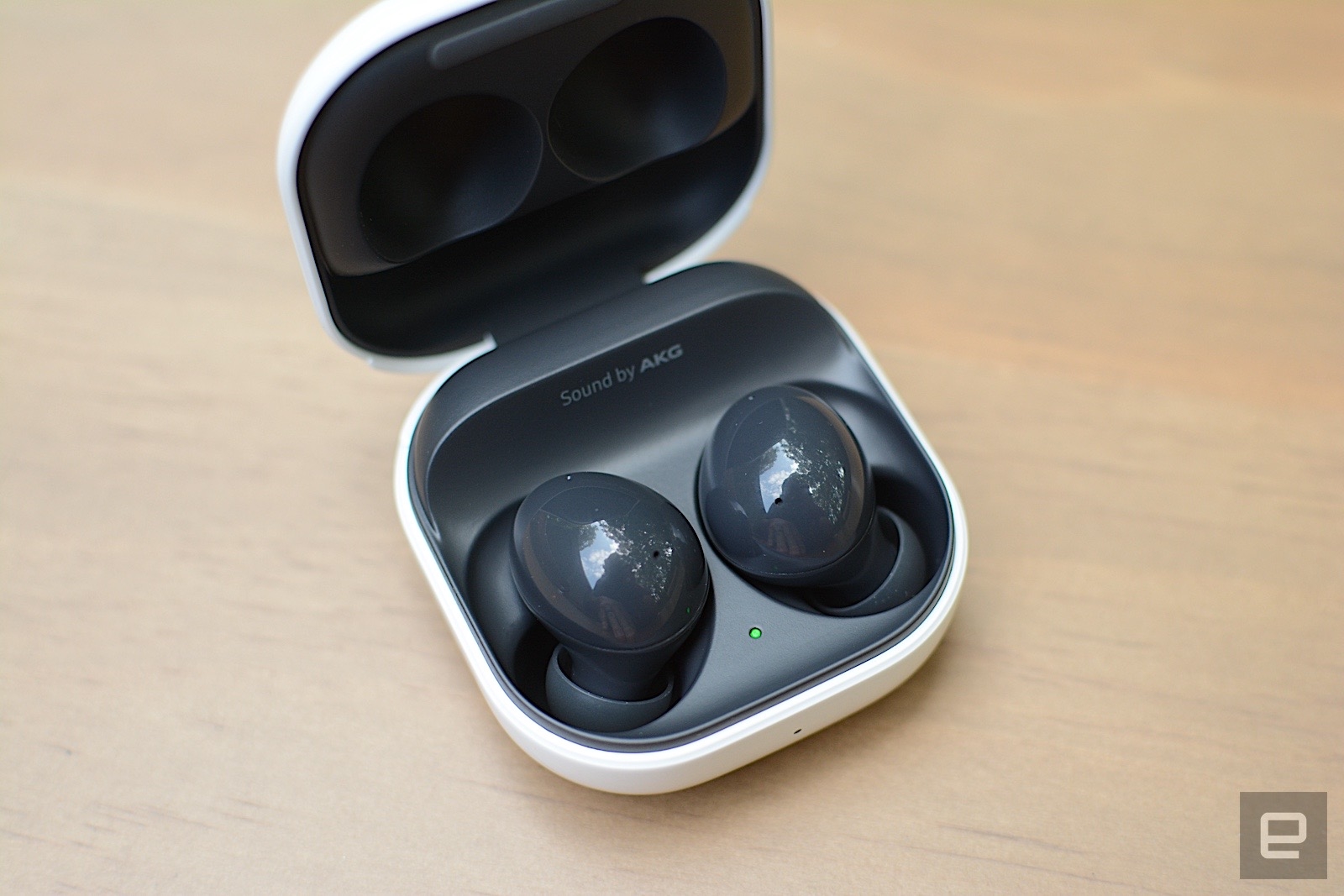 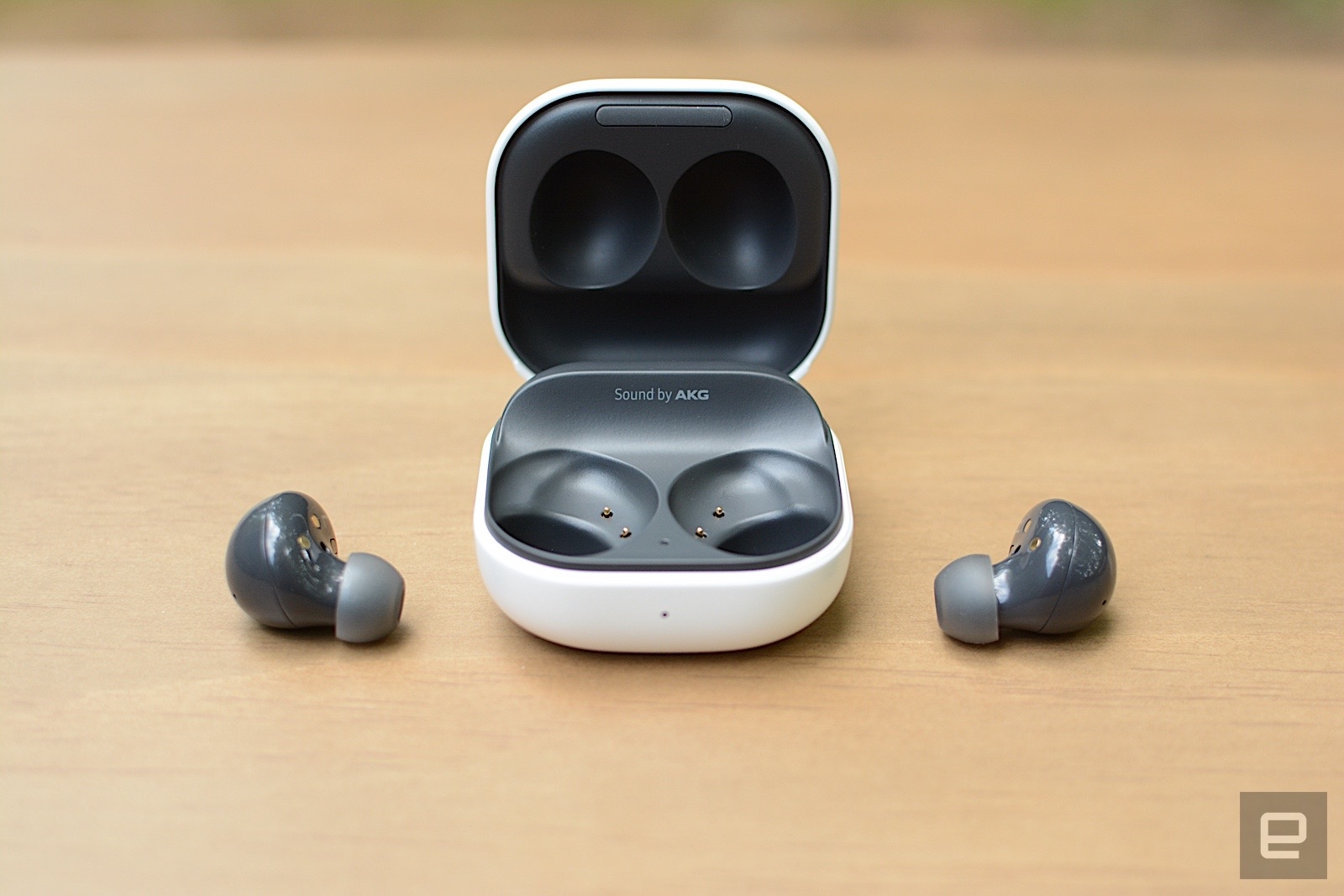 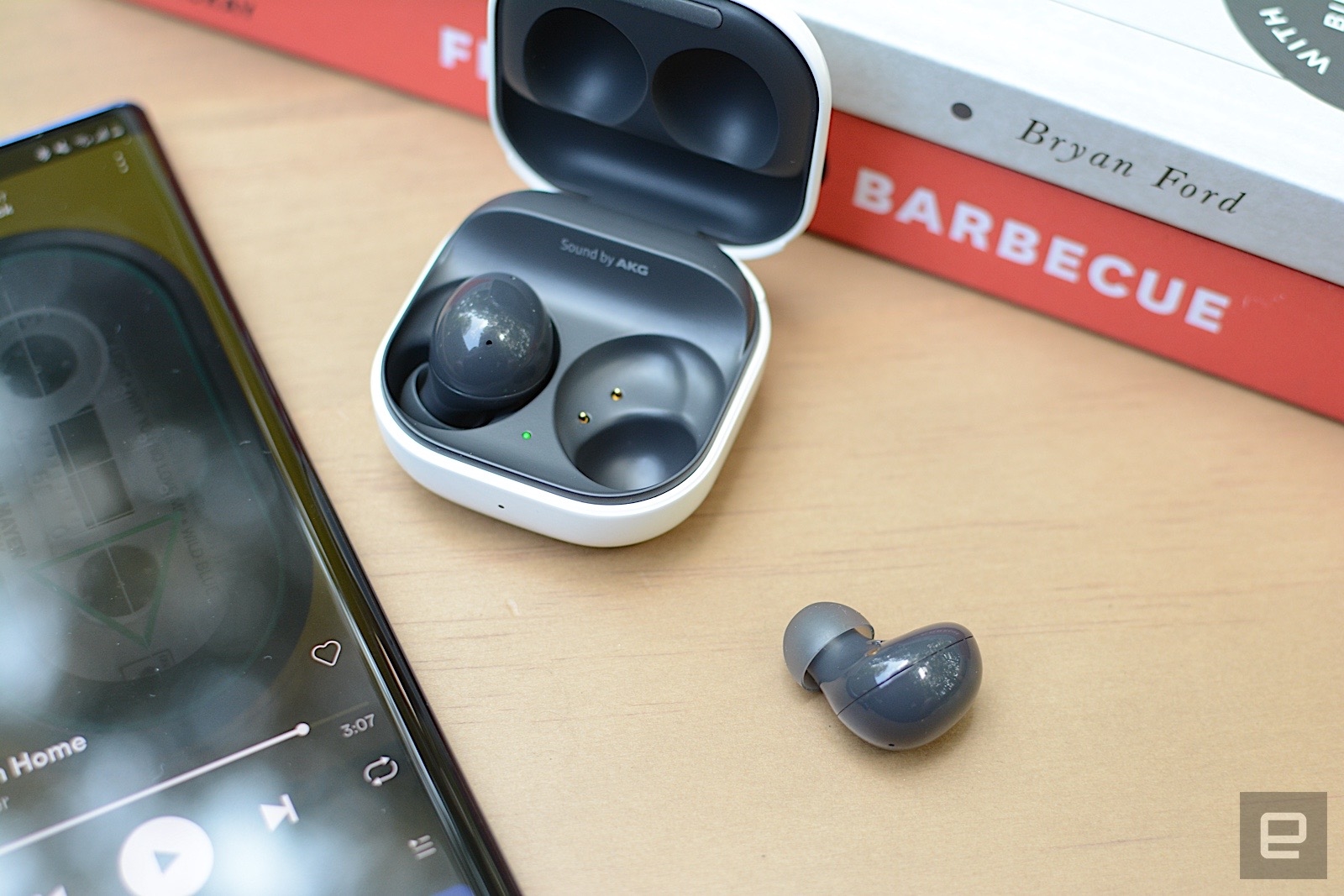 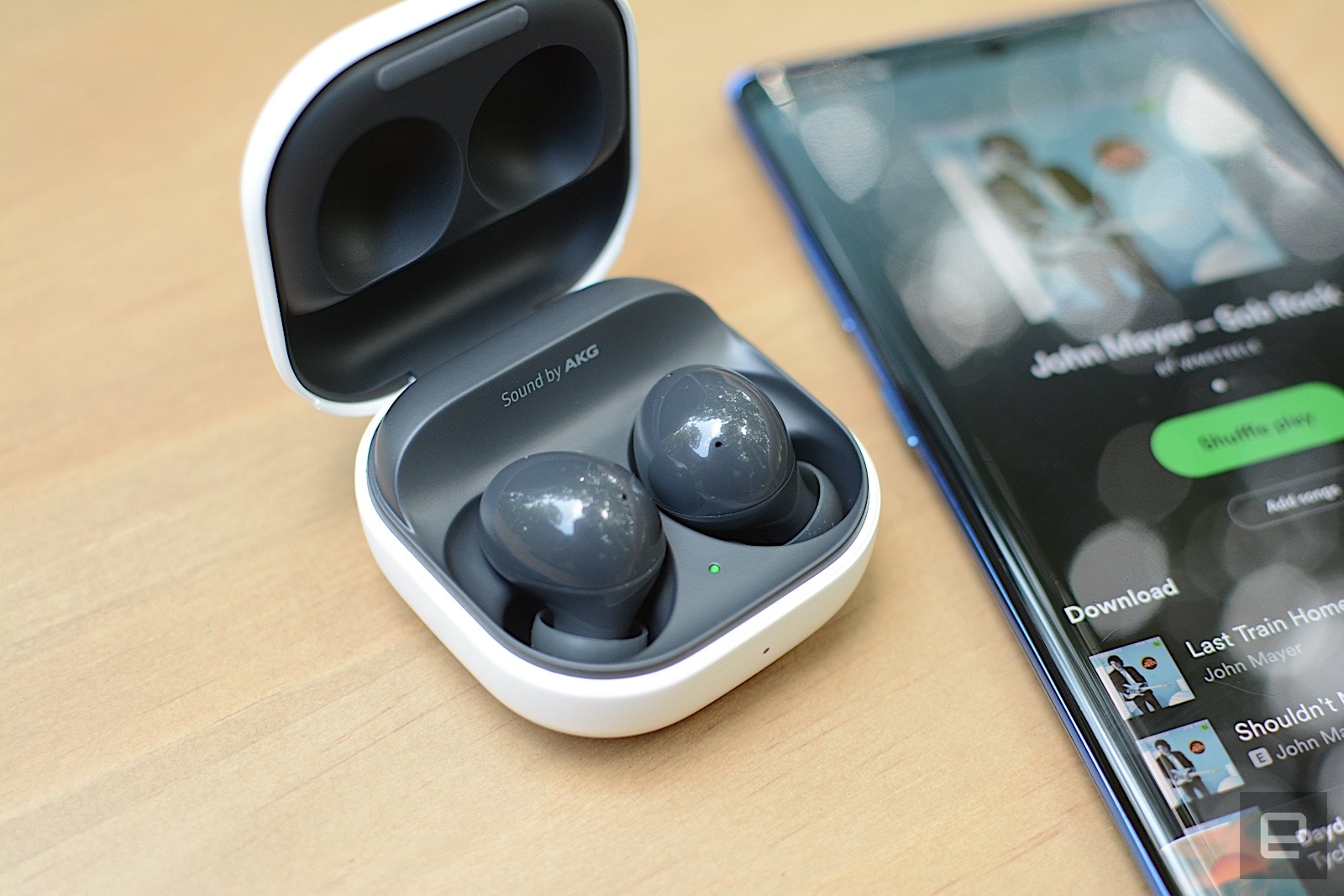 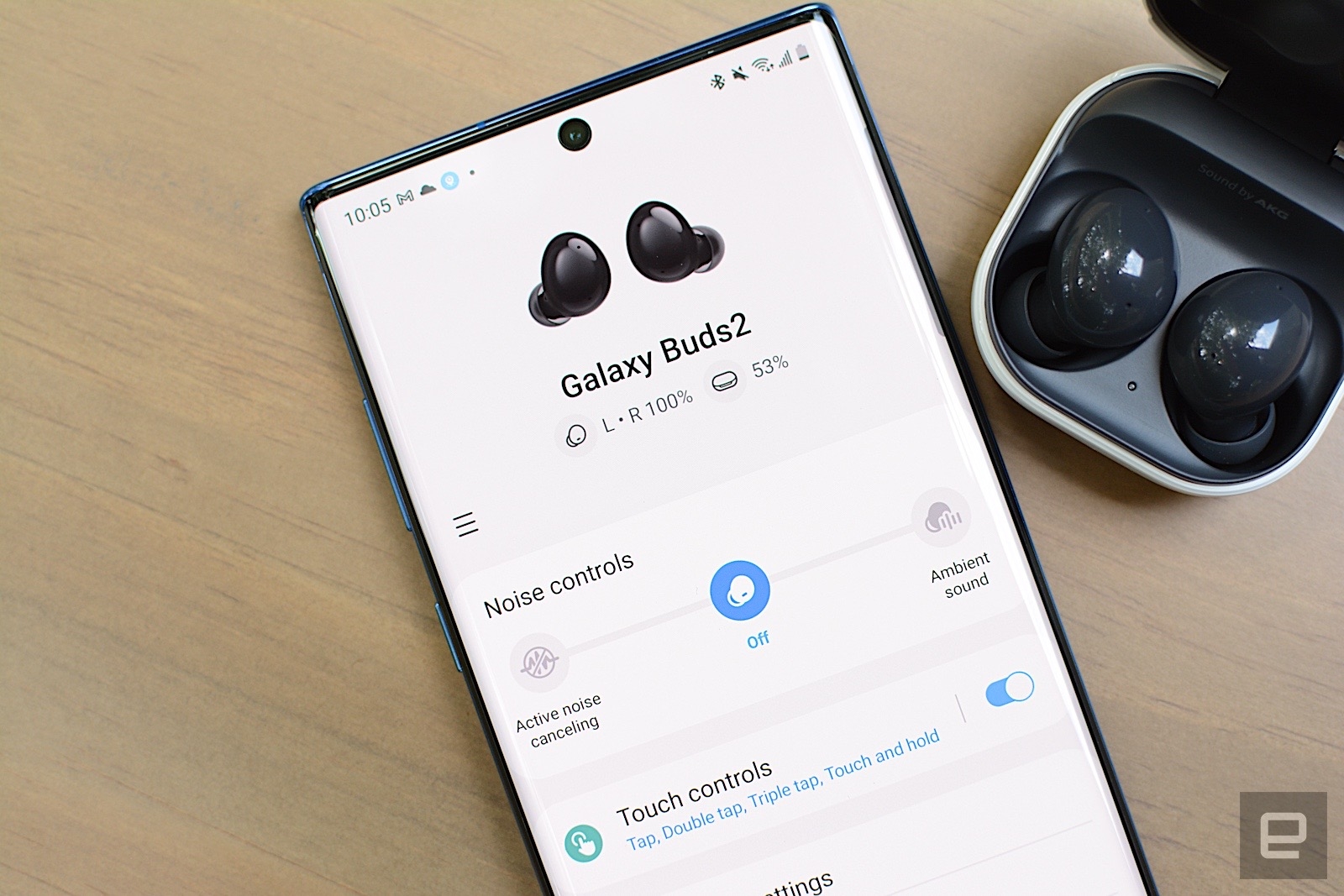 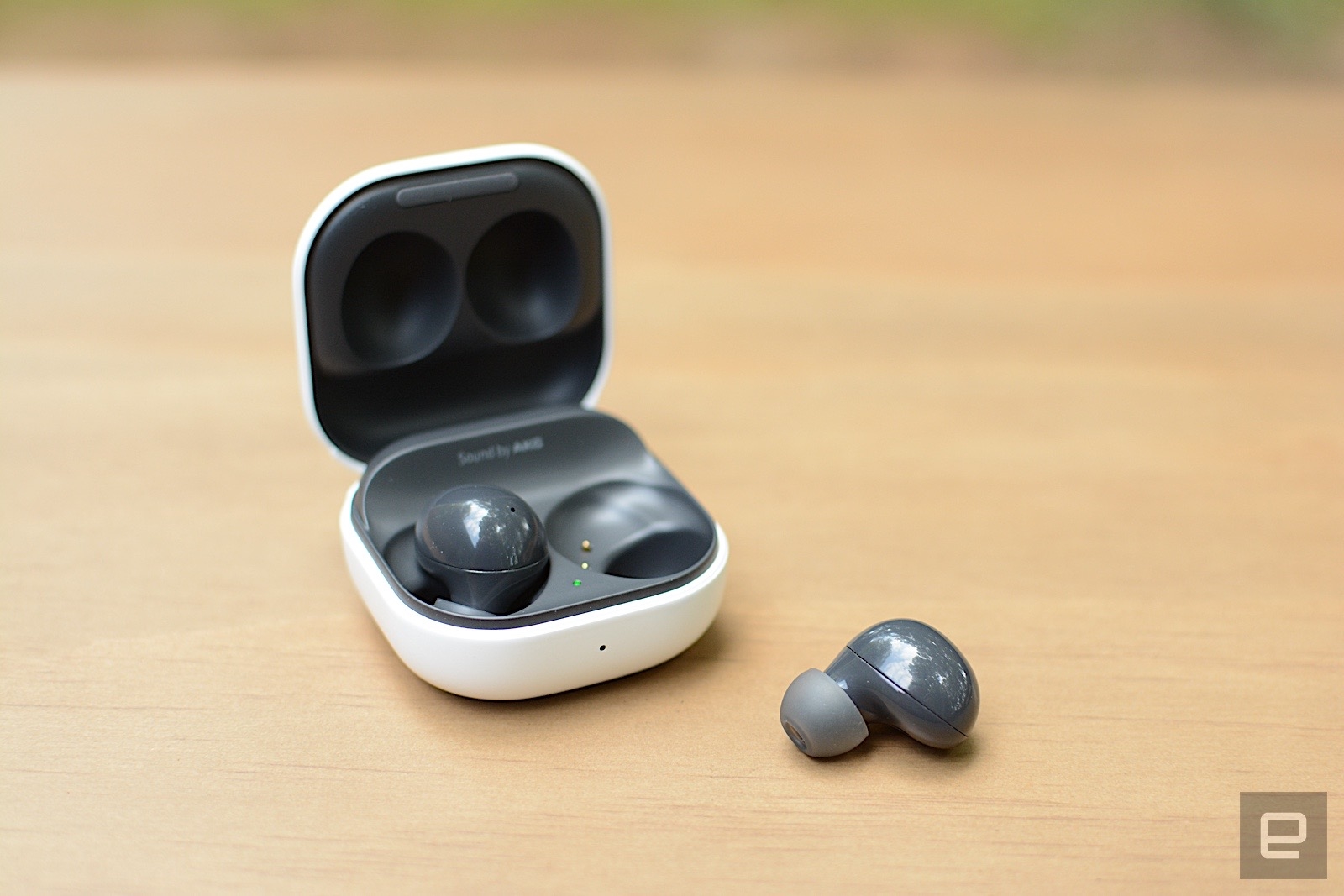 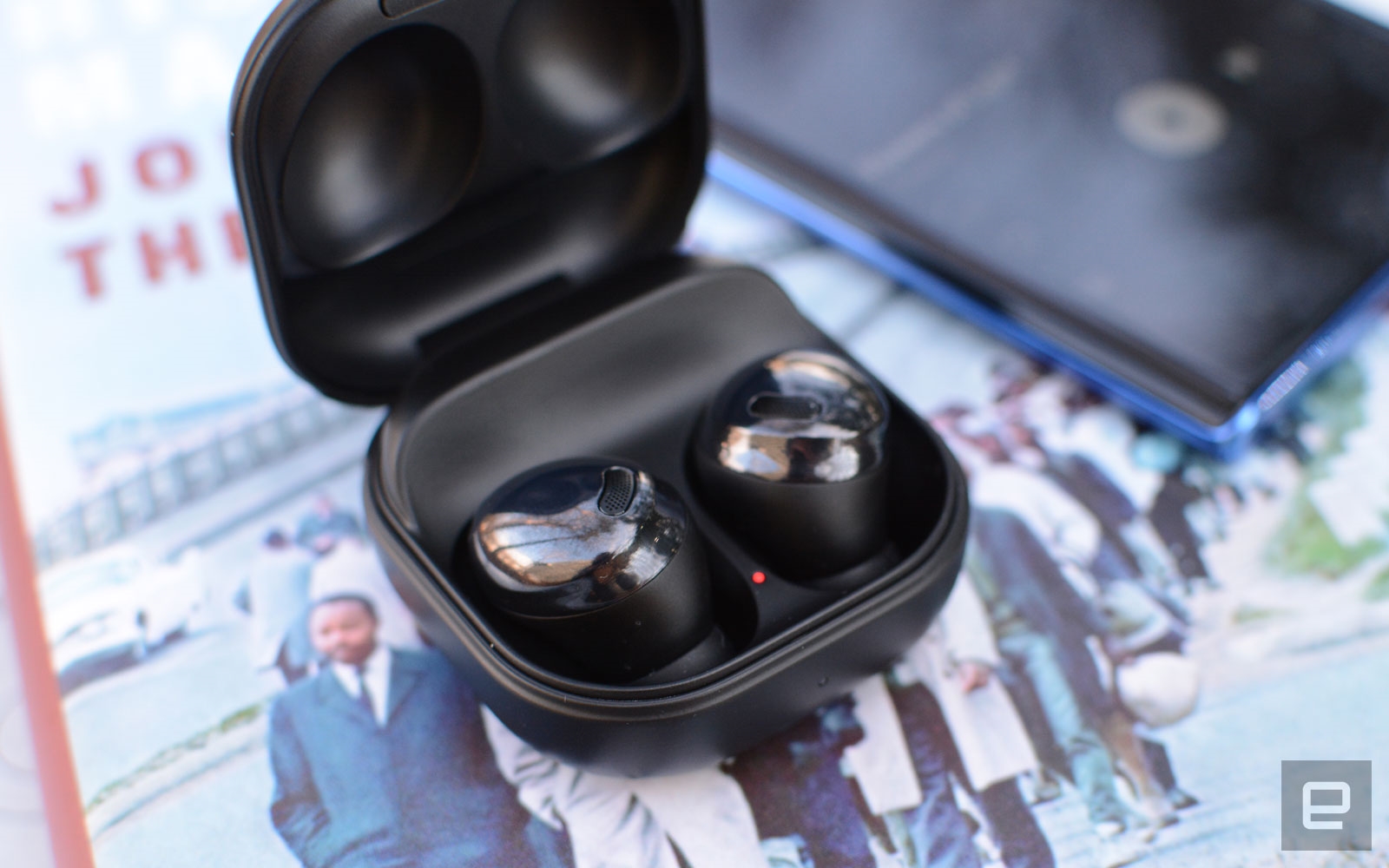