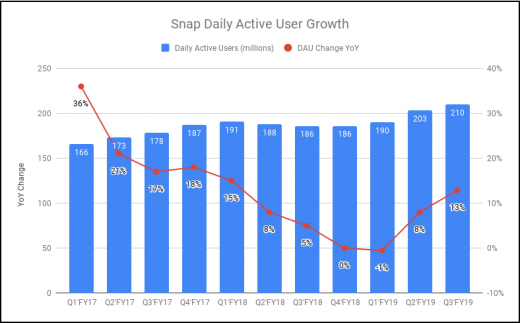 Snap, Snapchat’s parent company, had its third straight quarter of revenue growth during the third quarter of 2019, up 50% year-over-year at $446 million. Daily active users (DAUs) were up 13% year-over-year, reaching 210 million. Snap trimmed its loss by 30% in the quarter, from a loss of $323 million to a loss of $227 million.

Snapchat DAUs up on iOS and Android. It appears Snapchat has turned a corner in terms of growth among its Android users — a challenge it has been trying to overcome after a redesign in 2017 negatively impacted the Android version of the app.

Snap’s ad revenue keeps climbing. Snap’s commitment to the long-game, rebuilding its app in 2017 and focusing its efforts on building out its self-serve ad offerings appears to be paying off. The company is continuing to see steady growth, reporting an increase in revenue for three straight quarters. This is a good sign for the company — but what may be an even better sign is the CEO’s acknowledgement that the platform is “extremely” under monetized.

This quarter, the company launched Dynamic Ads, extended the allowable length of video ads from 10-seconds to three minutes, added new interactive features to its Commercial ad product and introduced a Goal-Based bidding model for advertisers.

“Our success is the result of planning, discipline, and deliberate decision-making across many teams at Snap who are obsessively focused on ensuring our ad products are innovative and performant, our self-service marketplace is delivering ROI at scale, and that our team is operationally set up for success,” said Snap’s Chief Business Officer Jeremi Gorman.

Snap’s AR initiatives. Snap is positioning itself to be the AR leader among social platforms — potentially a big selling point for brands looking to bring AR into their advertising strategy. The company reports that each of its DAUs are interacting with AR features nearly 30 times every day, on average.

Why we should care. Snap’s DAU numbers may not compare to a Facebook or Instagram, but the app is growing and is a prime channel for marketers wanting to connect with younger audiences. (For a number of months now, Snap has reported it reaches 90% of 13 to 24-year-olds in the U.S. and 75% of 13 to 34-year-olds.)

And, the company’s investment in its ad platform is delivering big results — Snap reports total ad impressions on the app were up 121% year-over-year during the third quarter of 2019. A Snap-commissioned study on CPG advertisers by NCSolutions found that Snap Ads were earning an average ROAS of $2.92 compared to a mobile ad industry standard of $2.50.

“Our advertisers are able to achieve higher ROI when they combine Snap Ads with our Augmented Reality and Creative Tools products, and this is helping to drive strong adoption of our Self Serve Reach and Frequency Lens products, which grew more than 30% sequentially in Q3,” said Snap CFO Derek Andersen. 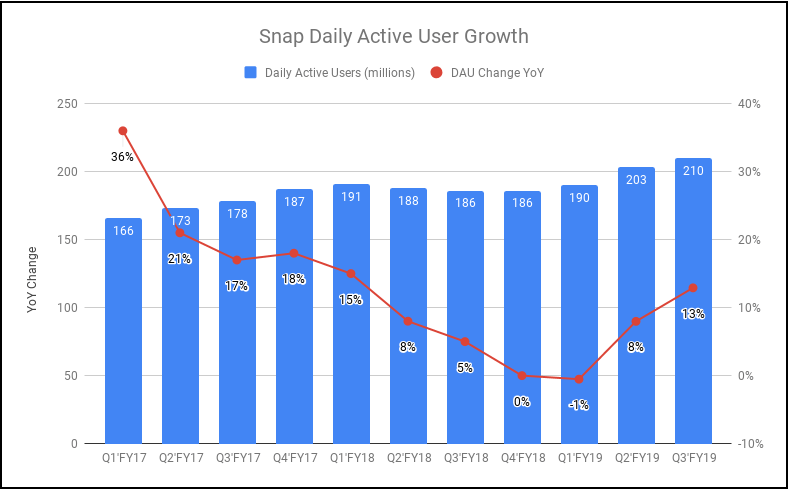