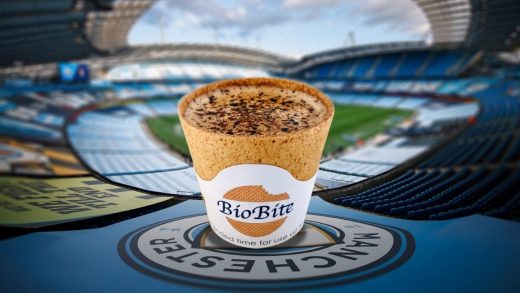 August 20, 2021
The Premier League, the most-watched league in the world, has restarted—with the thrill of fans back in the stands. Already, reigning champion Manchester City has bought breakout star Jack Grealish for a record £100 million, is mired in a tug of war for striker Harry Kane, and was dealt an unexpected opening game loss against Tottenham. But, the team’s quirkiest development this season may be off the pitch, over in the concessions stands.

Starting this weekend with Man City’s first home game, and throughout the season, Etihad Stadium will be serving hot drinks in edible coffee cups. The receptacles are made of wafer and keep their form when containing coffee, tea, or hot chocolate—and, crucially, don’t end up in the trash. The club announced the trial of the edible cups as part of a range of new concession-stand offerings for the upcoming season, many of which address environmental sustainability.

The concept of the cup is much like an ice-cream cone. Hot contents are served in 220-milliliter (7.4 fluid ounce) wafer “cups,” made of seven natural, vegan ingredients, chiefly wheat flour, oat bran, and water. They’re able to withstand high temperatures (of up to 85 degrees Celsius or 185 degrees Fahrenheit), due to a pressure heat treatment process; they don’t contain any sugar, wax, or artificial coatings.

They’re made by Scotland-based BioBite, a company started two years ago by University of Aberdeen students, Samuel Hvizd and Lyubomir Lambrev, as a way to offer a “tasty, crunchy, and a fully organic alternative to all disposable cups,” they say via email. BioBite now supplies a range of U.K. restaurants, bakeries, and chocolatiers with their products, which can also hold soups, as well as cold items like yogurt and ice-cream. The company’s goal, the duo says, is to “gradually replace unsustainable paper and plastic solutions currently used in the food and beverage industry.”

Filled with hot liquid, the wafer stays leak-proof for up to 12 hours, and crispy for up to 45 minutes—the duration, conveniently, of one half of a soccer game. The bottom half of the cups are wrapped in a paper label, which is both recycled and recyclable, for easier gripping; and to ensure that the bottom of the biscuit doesn’t touch any surfaces. They’re designed to taste like a thin cookie dunked in a cup of coffee, and contain approximately 100 calories per cup.

The cups are being trialed inside the stadium at selected points, and also in City Square, the fan zone immediately outside the Etihad that contains food-and-drinks kiosks. To the club’s knowledge, it’s the first Premier League side to offer edible cups in stadiums. “This fantastic and innovative solution provides an amazing solution to waste, just eat your cup!” reads the official release.

An estimated 7 million disposable coffee cups are used each day in the U.K., amounting to 2.5 billion every year. By eating the cups, the point is that they don’t ultimately end up in landfills. But the club assures fans that, if they prefer not to use themselves as wastebaskets, they’ll be able to dispose of the wafers in the on-site compostable waste stream, from which the club creates organic compost, as part of its peat-free commitments.

Sometimes, though, a coffee just won’t hit the spot. If fans need a beverage that’s a little colder to calm the nerves during a tense fixture, beer will be available in new paper beer cups this season, which are 100% plastic-free, and made from fully recyclable, sustainably sourced paper and card. 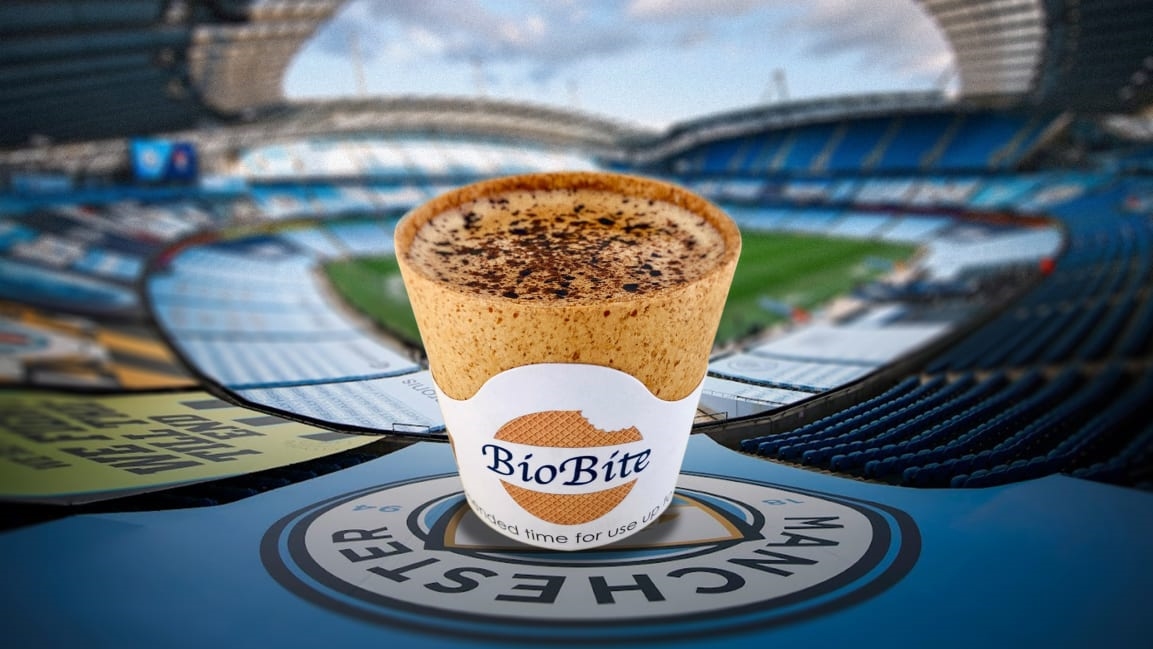