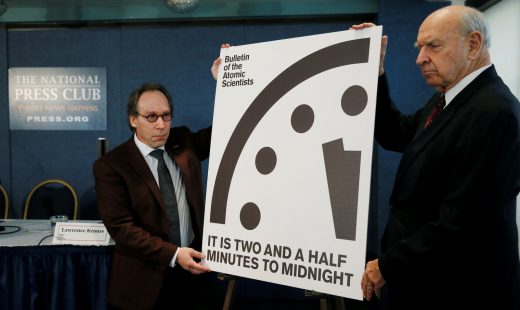 The Doomsday Clock is the closest to midnight since 1953

The Bulletin of the Atomic Scientists just pushed the Doomsday Clock to two and half minutes to midnight, marking the closest point humanity has been to extinction since the first hydrogen bomb test in 1953. Given this latest warning, it’s a good time to recall the symbolic clock’s history, from its 1947 creation by Manhattan Project scientists to the present. Nowadays, it takes into account not just nuclear dangers but climate change, geopolitics and other factors. With Donald Trump in power, the groups says, all of those areas are more at risk.

The Manhattan Project’s “Fat Man” and “Little Boy” atomic bombs are frightening physical proof of Albert Einstein’s famous equation E=MC^2. The scientists who developed the bombs were profoundly disturbed by the immense destruction and loss of life after their use in Hiroshima and Nagasaki for the first, and thankfully last, times.

In 1945, they founded the “Bulletin of the Atomic Scientists” to educate researchers, politicians and the public on the dangers of atomic weapons. The group created a magazine in June 1947 (pictured below), and was looking for a simple cover illustration that captured its fears about nuclear proliferation. Physicist Alexander Langsdorf Jr.’s wife, Martyl Langsdorf, a landscape engineer, had the perfect idea: She fused the metaphor of midnight approaching with a ticking bomb, and the Doomsday Clock was born. 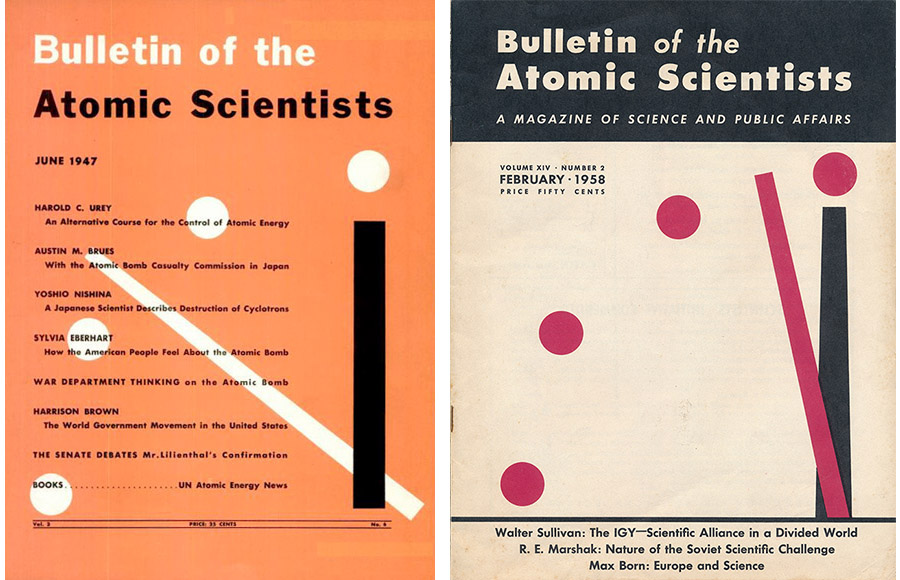 The original Bulletin of the Atomic Scientists’ cover, and one from 1957 at two minutes to midnight.

The clock was first set to seven minutes before midnight but moved ahead four minutes in 1949 when the Soviet Union tested its first atomic bomb. At that point, both the Americans and Soviets had fission bombs that split heavy radioactive elements like plutonium. Those early devices could “only” release the equivalent energy of up to 500,000 tons of TNT. The Hiroshima bomb, which had about 3 to 4 percent of that power, killed 100,000 people.

However, the clock was moved ahead to midnight minus two minutes after both nations tested hydrogen bombs in 1953. Also referred to as thermonuclear weapons, the devices fuse hydrogen atoms, often using fission bombs as a trigger. That can create a blast equivalent to 57 million tons of TNT (in the case of the USSR’s “Tsar Bomba,” below) or 100 times more energy than the most powerful fission bombs.

The clock stayed at that time until 1960, when it was moved back four minutes thanks to increased cooperation between the two nuclear powers. In 1963, it was set back even farther to 12 minutes to midnight with the Partial Test Ban Treaty but shifted ahead five minutes when France and China acquired nuclear weapons.

The Doomsday Clock oscillated back and forth until 1991. At that point, it hit its safest point ever, 17 minutes to midnight, after the US and USSR signed the Strategic Arms Reduction Treaty (START I), and the Soviet Union dissolved. The situation has gotten steadily worse since, thank to political instability and nuclear tests by Pakistan, India and North Korea. The Bulletin also added climate change to nuclear annihilation in 2007 as one of the greatest threats against mankind.

As the Bulletin notes, the clock has become a cultural touchstone, used by religious cults for end-of-days prophecies, as a metaphorical background to the 1964 Stanley Kubrick film Dr. Strangelove, and as a motif for the graphic novel Watchmen. As detailed in The Atlantic, it recently went through a major redesign that simplified and modernized it, while retaining its “brutally simple visual analogy,” according to designer Michael Beirut. The Bulletin of the Atomic Scientists group now uses the new design (above) as its logo.

(February 09, 2017), the clock was moved ahead 30 seconds, the closest it’s been to midnight for 64 years. It’s hard to believe things could be worse right now than they were during, say, the Bay of Pigs invasion in 1961. However, the group cited global warming dangers and nuclear weapon proliferation as the main reasons behind the shift. “Making matters worse, the United States now has a president who has promised to impede progress on both of those fronts,” wrote physicist Lawrence M. Krauss and Rear Adm. David Titley (retired) in the New York Times.

While the Paris Agreement on climate change was a positive step, the scientists believe the new administration is “openly hostile” to the idea of human-caused climate change. “It is well past time to move beyond arguments over the reality of climate change and on to solutions, including fiscal measures — such as carbon markets and carbon taxes or fees — that encourage efficiency and put a price on carbon emissions,” the group wrote.

On the nuclear side, North Korea recently tested weapons and Russia is building new silo-based and mobile missiles. Meanwhile, the US is busy modernizing its 7,200-weapon stockpile — the biggest of any nation — rather than reducing it. All of that requires diligent, serious leadership, but Trump “has shown a troubling propensity to discount or outright reject expert advice related to international security, including the conclusions of intelligence experts,” the Bulletin said.

“These are all matters in which President Trump has signaled that he would make matters worse either because of a mistaken belief that the threats posed by nuclear weapons and climate can be ignored, or that the words of a president of the United States do not matter to the rest of the world,” wrote Krauss and Titley. The consequences of that, as shown in the video below, could end us all. 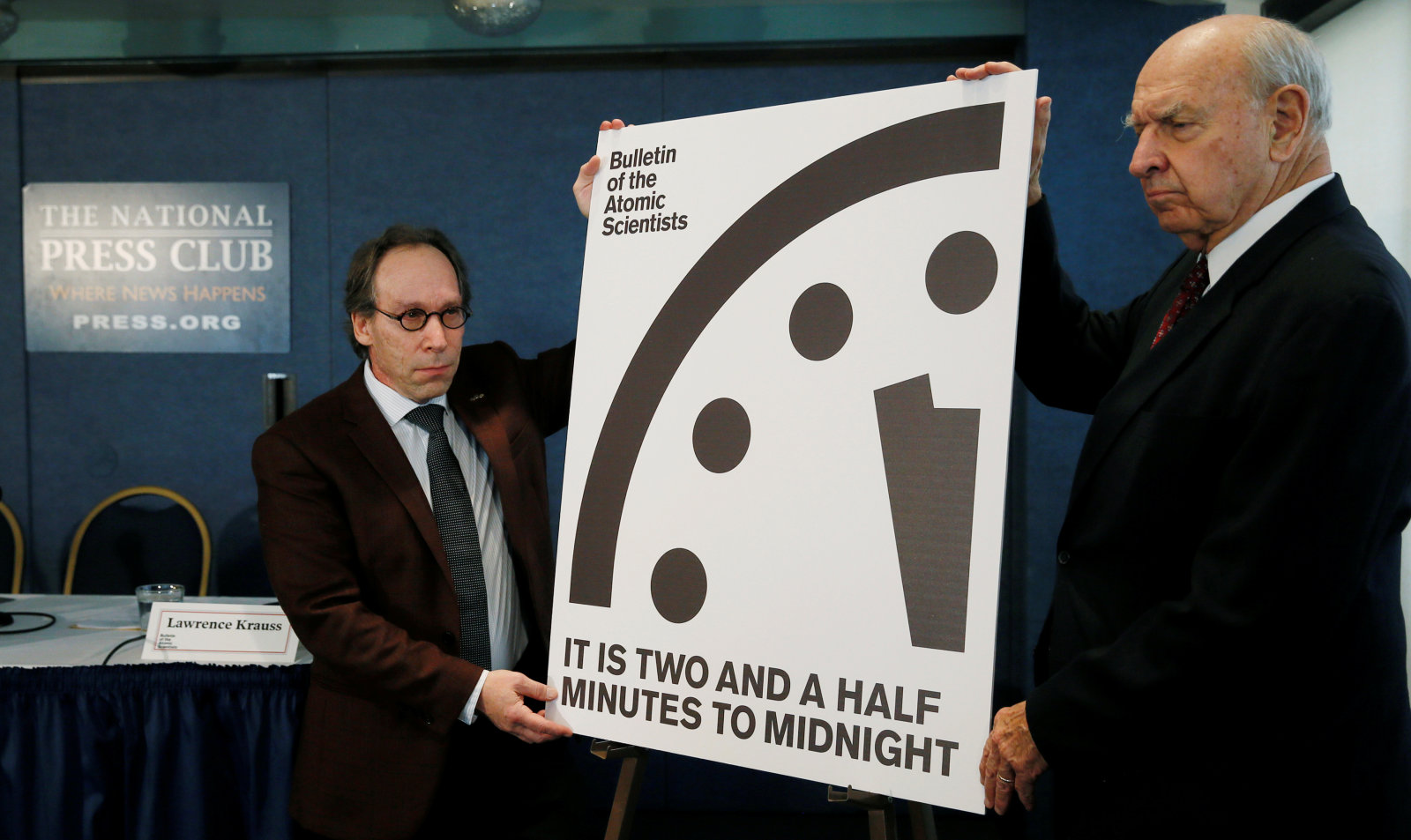