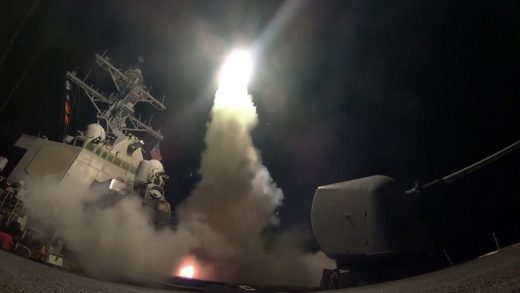 When President Donald Trump authorized cruise missile strikes on a western Syrian airfield on Thursday night, in response to deadly chemical weapons attack on civilians in that country earlier this week, his decision had some people wondering whether a president is allowed to take such military action without congressional approval.

The answer, it turns out, depends when in American history you ask the question. 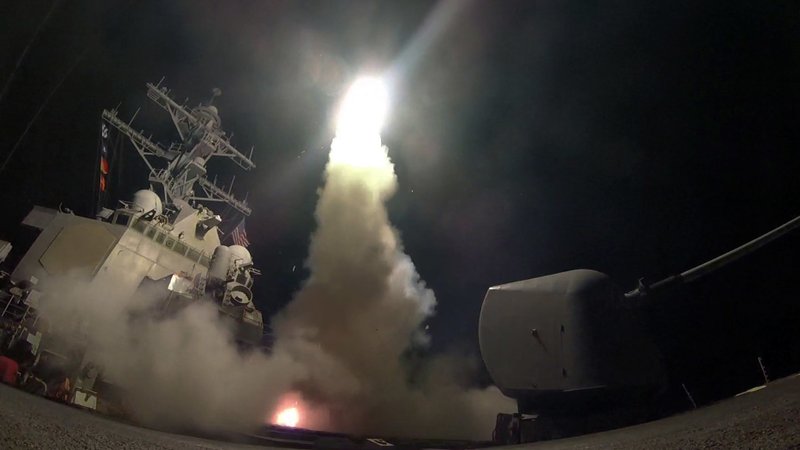 As TIME once pointed out, early interpretations of that split between legislative and executive war powers held that Congress was responsible for going on the offense, but the President could take charge in a defensive situation. This issue came to a test early on during what’s known as the Quasi-War with France, between 1798 and 1800. “Congress authorized naval seizures of American merchant ships going to French ports,” TIME explained. “But President John Adams went further and ordered the seizure of American ships leaving those ports as well, and the Supreme Court held that he had exceeded the intent of Congress.”

There were moments at which presidents pushed up against that boundary. For example, the event that spurred the Mexican-American War in 1846 was essentially the decision of President Polk to send U.S. troops into disputed territory; if you thought the area was in Mexico, the troops had invaded the neighboring country. In addition, the attack on Fort Sumter that started the Civil War happened when Congress was out of session, under the unilateral orders of Abraham Lincoln. When Congress returned, however, Lincoln — who had also called up the militia, suspended the writ of habeas corpus and took money from the Treasury for supplies — said he had overstepped his bounds and asked Congress to pass legislation authorizing what he had done. Nevertheless, the distinction in who had which powers remained fairly firm.

“From 1789 to World War II, presidents had to get a formal declaration of war or specific statutory authority,” says Louis Fisher, an expert on presidential war powers and Scholar in Residence at the Constitution Project. “The framers knew about government models in which a king could act unilaterally, and they didn’t want presidents acting like British monarchs.”

But in the years since World War II — the period in which the U.S. has had a large and stable role on the world stage — presidents have increasingly justified unilateral actions abroad by citing national security concerns. In effect, the defensive powers included in the earlier interpretation were extended to account for wider use. For example, for the Vietnam War, the 1964 Gulf of Tonkin Resolution allowed the President to use “all necessary measures to repel any armed attack against the forces of the United States,” as TIME reported later.

As Fisher puts it, Presidents have expressed the feeling that, in the age of nuclear weapons, they don’t have time to go through some deliberative process. The upshot is that the “President has to have unilateral authority to respond.”

And as the below examples show, a sense of urgency to take some sort of action has been felt by people on both sides of the political aisle.

When North Korea’s tanks crossed the 38th parallel into South Korea on June 20, 1950, President Harry S. Truman was afraid that action would be only the beginning of an effort by the Soviet Union and China to spread communism throughout Asia.

Truman went to the United Nations for approval for what he did next, instead of going to Congress, because he wanted the U.N. to declare North Korea’s invasion of South Korea a violation of international law, explains Michael J. Hogan, presidential historian and author of A Cross of Iron: Harry S. Truman and the National Security State 1945-1954. The U.N. approved his actions, and on June 27, 1950, Truman ordered American troops to South Korea to aid the country — marking the first time an President put American forces into direct military activity without congressional approval.

In March of 1969, just weeks after he came into office, as the Vietnam War continued, President Richard Nixon authorized the start to the bombing of North Vietnamese targets in Cambodia in a series of secret attacks done behind Congress’ back. Cambodia was a neutral country that was drawn into its neighbor’s conflict. Those actions are known as Operation Menu.

“Nixon wanted to send a signal to the North Vietnamese that they can’t violate Cambodia’s sovereignty, and he wanted to send a message to the Soviet bloc that he’s serious,” argues Timothy Naftali, co-director of NYU’s Center for the United States and the Cold War. “Sometimes, a foreign power wants to see the policy in action of the new president.”

In 1973, as the war wound down and Watergate-era Washington strove to recapture some of the power that Nixon had claimed for himself, Congress passed the War Powers Resolution to, in theory, limit what the president could do. “Under the new law, a President who orders troops into action abroad or ‘substantially’ increases the number of foreign-based U.S. troops equipped for combat must report the reason for his action to Congress within 48 hours. Congress could then rescind his order at any time by passing resolutions, which are not subject to White House veto, in both houses,” TIME explained that year. “Even if such resolutions are not forthcoming, the President must halt the operation after 60 days unless it has been approved by Congress, though he could prolong it another 30 days by certifying that the additional time is necessary for the safe withdrawal of the troops.”

Even after the War Powers Resolution, Presidents were able to interpret what it meant to order troops into action such that they could still make military decisions without Congress. As TIME once put it, “This is all part of the cat-and-mouse game of checks and balances. The War Powers Resolution is a check on presidential power, but the President seeks to balance this by, well, ignoring it.”

Under President Bill Clinton, Fisher argues, there were multiple instances of military action without congressional approval. Rather than going to Congress, he went to the Security Council or NATO allies for back-up on actions in Haiti and Bosnia that Fisher sees as military even though they were not billed as war.

Then, in 1998, Osama bin Laden‘s Al Qaeda claimed responsibility for attacks on the U.S. embassies in Kenya and Tanzania that killed more than 200 people. On Aug. 20, the U.S. launched retaliatory strikes on Al Qaeda in Afghanistan, and a strike on a pharmaceutical factory in Sudan that was believed to have been producing chemical weapons, though that has been disputed.

U.N. National Security Council’s Resolution 1973 authorized President Barack Obama to use military force in Libya to try and oust its leader Muammar Gaddafi. Obama later called the decision to do so without proper preparation “the worst mistake” of his presidency.

In 2013, after a chemical attack in Syria, President Barack Obama was thinking about or preparing to act unilaterally once again, but ultimately — and unsuccessfully — went to Congress for authorization.