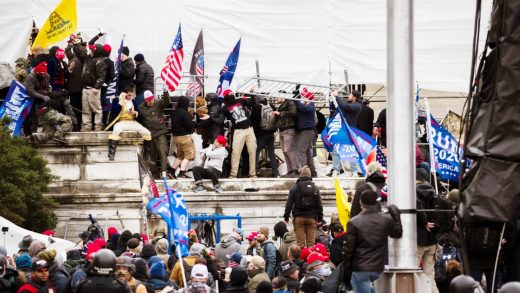 On Wednesday, media outlets around the country and the world hurried to make sense of the events in Washington, D.C. But even knowing what to call the Trump supporters who breached and vandalized the U.S. Capitol proved difficult.

All of a sudden, for horrifying reasons, these media outlets have had to confront the ugly question of how to put a quick label on the main characters in the story.

Should the people who stormed the Capitol be called a mob? Are they rioters? Are they domestic terrorists? Extremists?

Fox News calls them “protesters.” So do Newsmax and C-SPAN.

Initially, headlines on CNN’s website referred to the Trump supporters as a “mob” and as “rioters.” By Wednesday evening the network said it was officially characterizing Wednesday’s violence as “domestic terrorism.”

The Wall Street Journal chose to call them “rioters.”

The Los Angeles Times, The Washington Post, and The New York Times, after some reflection, settled on “mob” or “pro-Trump mob.” The San Francisco Chronicle and USA Today landed on the same terminology.

Germany’s Deutsche Welle initially referred to “pro-Trump protestors,” but amended its report to refer to a “pro-Trump mob” a few hours later.

The BBC referred to them as “rebel Republicans” and a “violent pro-Trump mob.”

The Oxford Dictionary defines mob as “a large crowd of people, especially one that is disorderly and intent on causing trouble or violence.”

Some have observed that terrorist might be the most descriptive word for the Trump supporters who participated in the breach of the Capitol today. Here’s the FBI’s definition of domestic terrorism: “Violent, criminal acts committed by individuals and/or groups to further ideological goals stemming from domestic influences, such as those of a political, religious, social, racial, or environmental nature.”

The FBI uses the term extremist  in the context of both domestic and international terror.

The large group of Trump supporters that poured into the Capitol did indeed break laws. They destroyed, defaced, and stole federal property, and they endangered the lives of lawmakers and their staffs. They attacked and injured Capitol Police officers, who are charged with protecting lawmakers and the lawmaking process. And yet, as of 5:38 p.m. EST, the D.C. police say they’ve made only 13 arrests.

But no news outlet anywhere near the mainstream directly referred to today’s event as a terrorist act in news reporting, or to the perpetrators as domestic terrorists. An article by Mother Jones D.C. bureau chief David Corn used the word terrorist in the headline, but that was an opinion piece in an outlet that makes no pretense to neutral reporting.

Others have referred to the Trumpists as extremists, a term normally used in the media to describe foreign groups. NPR had this guidance for its staff: “We won’t be calling the people who stormed the Capitol ‘protestors’—they are ‘pro-Trump extremists’ and what they are doing is ‘insurrection’.”

The FBI uses the term extremist in the context of both domestic and international terror. “[D]omestic violent extremists have developed an extensive presence on the Internet through messaging platforms and online images, videos, and publications,” the FBI says on its website. “These facilitate the groups’ ability to radicalize and recruit individuals who are receptive to extremist messaging.”

During a speech on Wednesday, President-elect Joe Biden used an array of terms to describe the perpetrators.

“To storm the Capitol, to smash windows, to occupy offices on the floor of the United States Senate, rummaging through desks, on the House of Representatives, threatening the safety of duly elected officials,” Biden said. “It’s not protest; it’s insurrection.”

The folks at Merriam-Webster thoughtfully tweeted out the definition of insurrection today:

???? We define ‘insurrection’ as “an act or instance of revolting against civil authority or an established government.” https://t.co/ucZH4Hfo5M

There will be lengthy public debate over how the law should treat the people who broke into the Capitol. As that debate continues, the names media uses to describe those Trump supporters may evolve too.