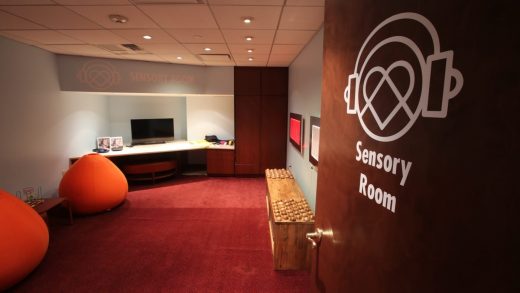 The NBA’s Autism-Friendly N.Y.C. Store Is A Slam Dunk

There’s nothing like the energy of a live sporting event. The cheering fans, the flashing lights, and the screeching whistle all make for an adrenaline burst like few others. But for someone with autism or other sensory processing disorders, game-day overload can easily set off a sudden and frightening panic attack.

Jeff and Amy Belles know this scenario all too well. The two took their then 10-year-old autistic son to a Cleveland Cavaliers game in 2016 and things quickly went south. Carson, who is nonverbal, carries a speech-generating device to help him communicate. When he walked through the security gate at the team’s Quicken Loans Arena, his tech equipment set off an alarm, which triggered the anxious boy.

Related: Redesigning Sports Arenas To Make Them More Accessible To Fans With Autism

The security guard asked him to hand over the device, but Carson instead recoiled to his father. “There’s no way for someone to know that Carson has sensory disabilities,” Jeff says. “The guard just assumed he was a bad kid and kept escalating the situation.”

The incident was one of many that have come to the attention the National Basketball Association. Over the years, people with sensory disabilities, ranging from autism to PTSD to sensory processing disorder have become overwhelmed at games and reacted by screaming or flapping their arms in distress.

The Cavs connected the NBA to a nonprofit called KultureCity, which works to make public spaces friendlier for people like Carson. The sports league on Friday opened its fourth sensory-inclusive space at the home of the Utah Jazz. The Cavaliers and two other teams–the Sacramento Kings and the Oklahoma City Thunder–already have these rooms.

And today, in New York City, the NBA Store on Fifth Avenue announces that, with the help of KultureCity, it has outfitted its space to make it more inclusive for people with sensory disabilities.

While other retailers have held sensory-friendly shopping days, the NBA Store is believed to be the first store of its kind in the world make it a permanent part of its operations. “Our hope is that we will demonstrate how easy it is to make spaces more inclusive, and will inspire other stores to do the same,” says Todd Jacobson, SVP of social responsibility at the NBA. “It’s not just the right thing to do, it’s also good for business, since it means people with extra needs and their whole families will feel welcome.”

This is part of a broader effort by the NBA to make all its public spaces more sensory-inclusive. With KultureCity’s guidance, stadiums and arenas have been outfitted with quiet spaces for individuals and families that want to get away from the noises and lights. Staff members hand out “sensory bags” that are equipped with noise-cancelling headphones, fidget toys, and an iPad, among other things, that help someone with sensory issues cope with their super-charged environment.

“The most important thing we do is train employees” to prevent situations like that experienced by the Belles in Cleveland, says Julian Maha, KultureCity’s founder. “It has the biggest impact because it allows staff to spot someone who might have a sensory disability and respond to them with compassion and dignity, rather than making the situation worse.”

For Maha, an emergency room physician by training, the KultureCity mission is personal. His son is autistic, and the difficulty in finding spaces where the boy felt safe and happy kept the family at home, which seemed incredibly unfair to him. “How often have you gone out to a restaurant and noticed a person with a sensory disability?” Maha asks. “The very fact that you don’t see these people out shows you that they don’t feel welcome in these spaces.”

But through KultureCity, he says, small changes can go a long way to making a basketball game, restaurant, or store a place where a person with autism or PTSD can feel much more comfortable. KultureCity, which is funded by donors, works with businesses to provide them with the tools to become more inclusive.

At the NBA Store in Times Square, the staff will have sensory bags to distribute and should someone need to leave the store in a hurry, there will be special exits. But perhaps more importantly, retail associates will be on the lookout for signs that someone has special sensory needs. This could range from extreme fidgeting to compulsively touching everything in sight or repeating words.

“The thing about people with autism is that they don’t react in the same way each time they have an episode,” says Amy Belles. “It’s almost impossible to predict what they will do.” The Belles hope that the impact of this initiative at the NBA Store will inspire others.

“We’re not trying to change how companies do business,” says Jeff Belles. “It’s not very expensive to make a store more inclusive, but for families like ours, it makes a world of difference.” 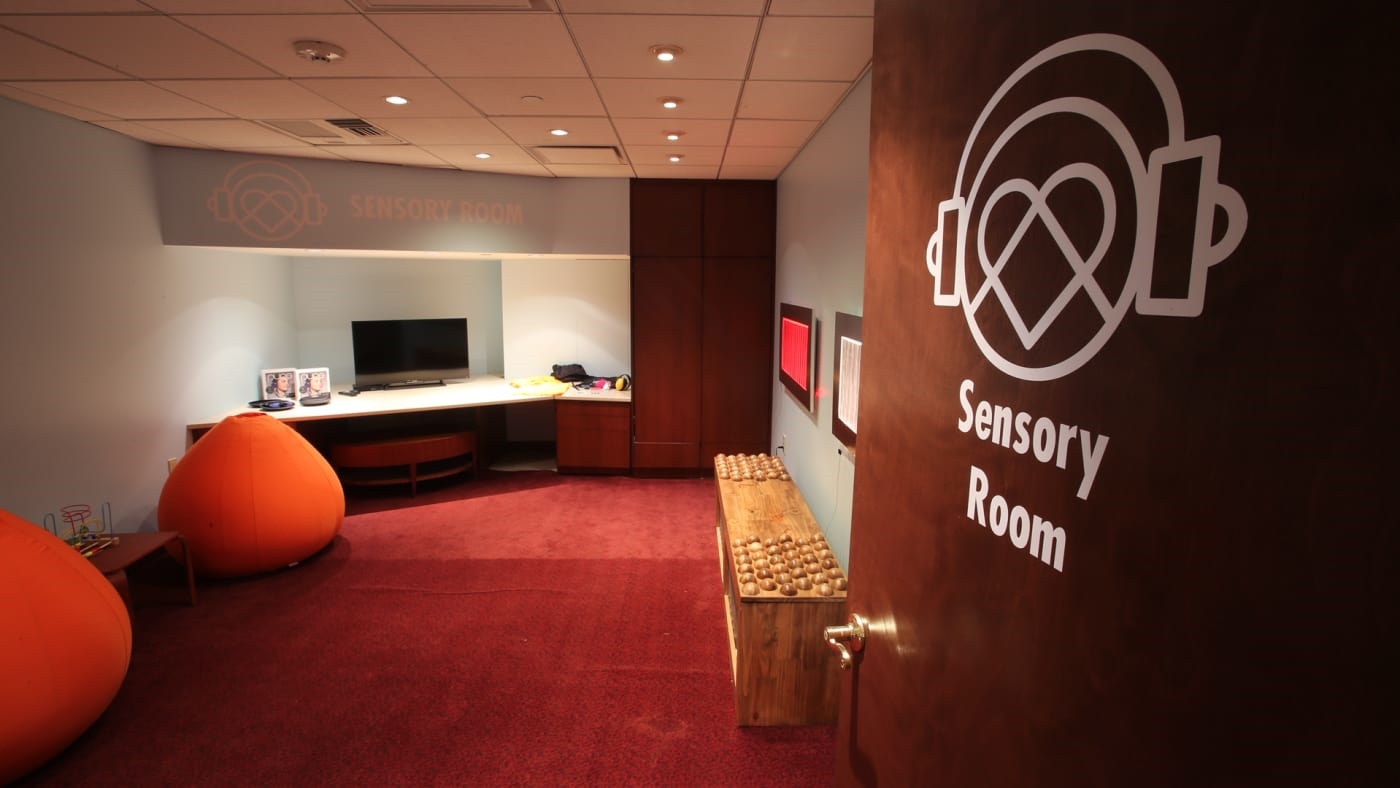