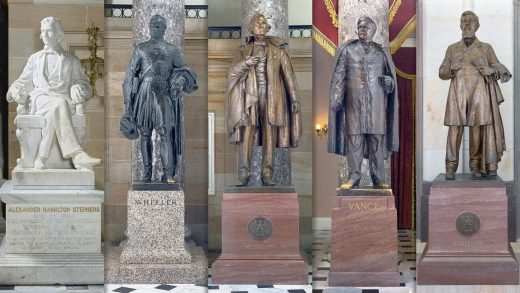 The U.S. Capitol is a symbol of democracy. But it’s full of Confederate statues

Last Wednesday, insurrectionists stormed the United States Capitol, waving American and Confederate flags and Trump banners. The sight of rioters below John Trumbull’s “Declaration of Independence” fresco, and similar works, was a tragic violation of American democracy. And yet, if rioters had taken a closer look, they would’ve have found plenty of imagery with which they could identify. The U.S. Capitol abounds with confederate symbolism.

There are at least 11 Confederate statues still in the Capitol building, in the crypt, below the Rotunda; the Hall of Columns on the first floor; the National Statuary Hall on the second floor; and the Capitol Visitor Center. There’s Confederate President Jefferson Davis, Confederate Vice President Alexander Hamilton Stephens, Confederate General Edmund Kirby Smith, Confederate military officer Zebulon Vance, Confederate Cavalry officer Joseph Wheeler, and Confederate Colonel James Zachariah George. Both Stephens and Davis were charged with treason against the United States.

The Office of the Architect of the Capitol has a rule that each state may send two statues to be placed in the National Statuary Hall; all of these symbols of hate and disloyalty to the Union listed above were submitted by Southern states in either the Jim Crow era or in the 1950s, during the Civil Rights movement. More recent figures like Barry Goldwater, who voted against the Civil Rights Act, are on site in the Capitol Building, too, according to its website. The Office of the Architect of the Capitol did not respond to a request to comment.

Additionally, John C. Calhoun, a pro-slavery vice president under John Quincy Adams and Andrew Jackson, and Charles Brantley Aycock, a white supremacist and agitator in a 1898 North Carolina coup, are still listed on the Architect of the Capitol’s website as located in the crypt. (The coup is notably absent from Aycock’s official bio.) James Paul Clarke, a Arkansas Governor who once said “people of the South looked to the Democratic party to preserve the white standards of civilization,” is still listed as on site in the Capitol Visitor Center. These statues were listed as statues to be removed under a bipartisan bill passed by the House this summer because of their ties to the Confederacy and white supremacist agendas. It died in the Senate.

Confederate General Robert E Lee was removed from the Capitol building this summer at the request of Virginia Governor Ralph Northam, and will be replaced by Barbara Johns, whose court case against conditions at her school became part of the landmark Brown v. Board of Education supreme court case.

The symbolism of having these monuments to Confederate leaders on site at the Capitol building is profound.”We think of the Capitol as this bastion of democracy and representation,” says Casey Burgat, the director of the Legislative Affairs program at the Graduate School of Political Management at George Washington University. “It’s supposed to represent the will of the people. It’s the branch most directly connected to the voters. So when certain states choose to memorialize figures—because you only get two—it sends a signal that we’re memorializing folks that literally fought against this country and for certain races, genders, and backgrounds.” The presence of these figures on site at the Capitol building glorifies the goals of the Confederacy.

They also send a message to the people who work in the building. Congresswoman Alexandria Ocasio-Cortez pointed out this summer that nearly all of the statues in the Capitol are white men, and called such erasure of women and people of color from American history a feature of white supremacy. While it be may be possible for Congressional staffers to walk by these statues and not think twice, staffers of color “don’t have the luxury of walking past those and not remembering what they meant and what they stood for,” Burgat says.

But change could be afoot. Burgat suggests that with Democratic majorities in the House and Senate, the failed bill might succeed if it’s brought up again. 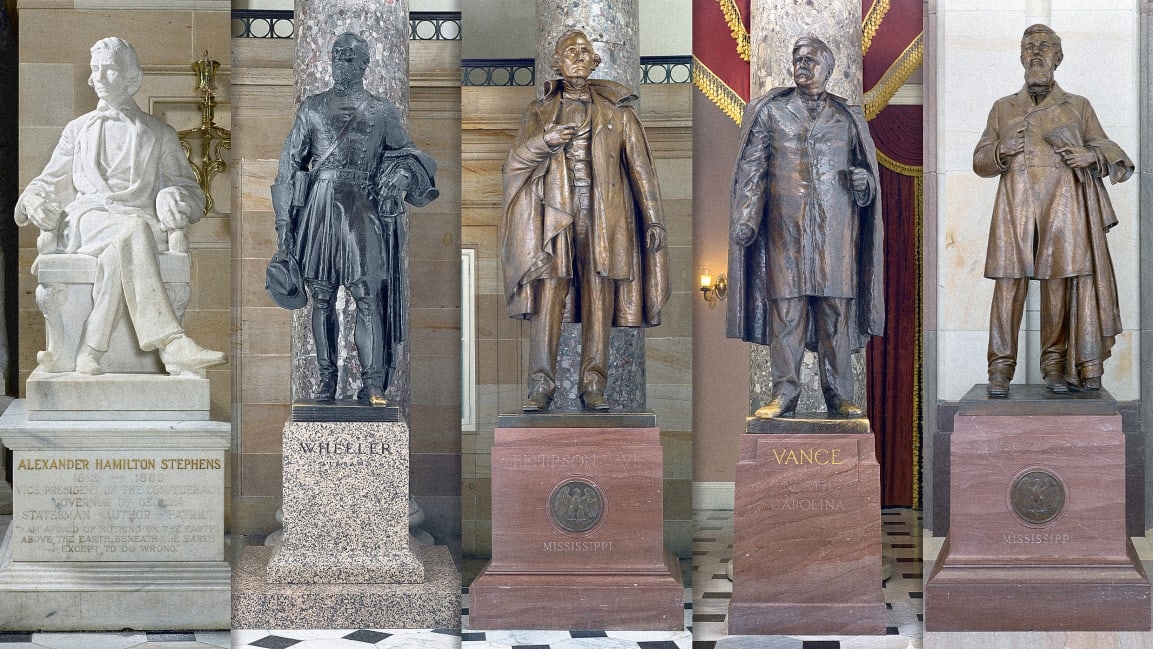