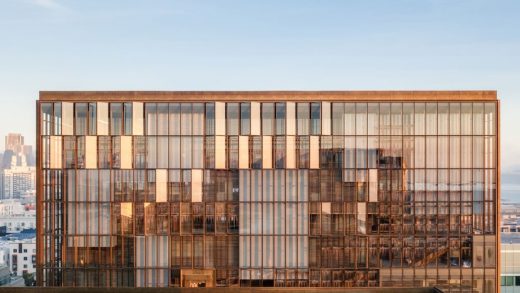 It could be easy to mistake the new, two-building San Francisco headquarters of Uber for just another couple of downtown office boxes, a corporate formula of glass and steel. But then the flat curtain of the facade begins to move. In tall folds like the side of an accordion, the exteriors of the buildings gradually crack open, revealing that their walls are actually massive glass windows. Pulling air in and regulating the building’s temperature, these automated vents rebel against the model of the air-conditioned box. With a pandemic floating in the air and the fact that indoor environments of office buildings are often more polluted than the outdoors, access to fresh air is more important than ever.

Designed by the architecture firm SHoP, known for technologically advanced building projects like Brooklyn’s Barclays Center, Uber’s new buildings represent a new phase for the company as well as a new direction for office buildings in general. “The whole idea of a building that transforms throughout the year, through the seasons, that becomes naturally ventilated, it really turns architecture into something that isn’t frozen anymore,” says Christopher Sharples, a founding principal at SHoP.

The new buildings are Uber’s first ground-up construction project, and the design took shape over the course of more than six years and more than half the life of the company. The two buildings—one at 11 stories, the other at six, with two sky bridge connections—make up 423,000 square feet of space for Uber’s operations in the Mission Bay neighborhood in downtown San Francisco. Just as other tech companies decamp from the city, Uber is dropping anchor.

Sharples says this connection to the city guided the design of the new headquarters, directly inspiring one of its architectural features. Behind the automatically controlled venting window facades, SHoP has designed a kind of in-between space that’s neither fully outdoors nor technically part of the offices within. Filling in a ground-to-roof slice of the front of each building, this area, called the Commons, serves as the main circulation, with staggered staircases, jutting walkways, and meeting spaces connecting the floors of each building. Lined by the venting window facade, this atrium-like area serves as a social hub.

“This is almost like extending the idea of the sidewalk into the building and then verticalizing it, so that every floor is connected with it,” Sharples says. “There’s a continuous vertical landscape. It might sound a little hokey, but it’s almost like the front porch for Uber.”

The venting facade works as a kind of temperature-control system, with 14-foot-tall glass panes opening and closing automatically to regulate the conditions inside the atrium. Connected to a building-management system, the glass will be tilted open and closed throughout the day to maintain a comfortable temperature. The 180 operable glass panes were placed in specific locations on the building, based on environmental modeling of sun and wind patterns. SHoP principal Angelica Trevino Baccon says the space will be able to bring in natural air flow most days. “San Francisco’s climate allows that,” she says.

Sealed-up office buildings have been the status quo in the United States since the advent of air conditioning in the early 20th century. With building heating and cooling regulations often written by the heating and cooling industry, and outdated thermostat settings geared around the comfort of men in suits, the American office building is typically an over-cooled vacuum chamber. But not all offices are designed to be so tightly enclosed. Many European office buildings, some modern and some dating back to the pre-air-conditioned era, are resplendent with operable windows that workers find healthier and more pleasant to be in.

The operable windows at Uber’s new headquarters are a move back in that direction. The facade is also a source of energy savings, according to Baccon. The building is aiming to achieve LEED Platinum, one of the highest green-building certifications. The use of the venting windows on the exterior of the Commons as well as some operable windows in other parts of the buildings meant that the designers could cut out some heating and cooling systems. Baccon says the windows led to about a 20% reduction in mechanical systems.

Even bigger concerns had to do with how the spaces would be used by workers. Before, Uber’s thousands of employees were dispersed in several buildings across San Francisco. In consolidating them all into the new headquarters, the company was keen to find ways for people to collaborate in person. “The challenge with these vertical workplaces is just how do you really incorporate connectivity between the entire company,” she says. “One of the driving factors of the design [was] can we create diversity of space?”

By centralizing the walkways and staircases, and carving out seating areas and meeting spaces within the ventilated atrium, Baccon says the design makes the Commons a space that workers will both need and want to use.

“All those spaces have been thought of as informal gathering spaces,” says Mike Huaco, Uber’s vice president of workplace. Huaco says the company was deeply involved in guiding how the Commons was designed in order to make room for its various teams to be able to meet face to face. “We’re seeing the design actually work,” he says. “We’re seeing people gather.”

Uber would not disclose the budget for the project but Huaco describes it as “a significant investment,” with a focus on environmental sustainability and the wellness of company employees.

In addition to providing workers with access to fresh air inside the building—a rare but desired commodity in modern office buildings, especially during the COVID-19 pandemic—the Commons also becomes a part of the visual identity of the complex. Because it is not an air-conditioned space that relies on ventilation to regulate its temperatures, the outer facade only necessitated the use of single-pane glass. “It makes it incredibly transparent and open. At night you really feel like the skin of the building has been removed and you’re looking right into the office,” Sharples says. “When you look at most office buildings, they tend to be introverted and you really don’t know what’s going on inside.”

In Uber’s new headquarters, the folding glass walls are a way of opening up. They’re also pointing a new direction for office design that’s less reliant on air conditioning and more connected to fresh air.

“In a way we made what is typically invisible, the environmental flows of air and temperature changes, into a physical manifestation, where you read the change through the facade,” Sharples says. “To us that’s a new kind of architecture. The building’s always going to change. It’s never going to look the same.” 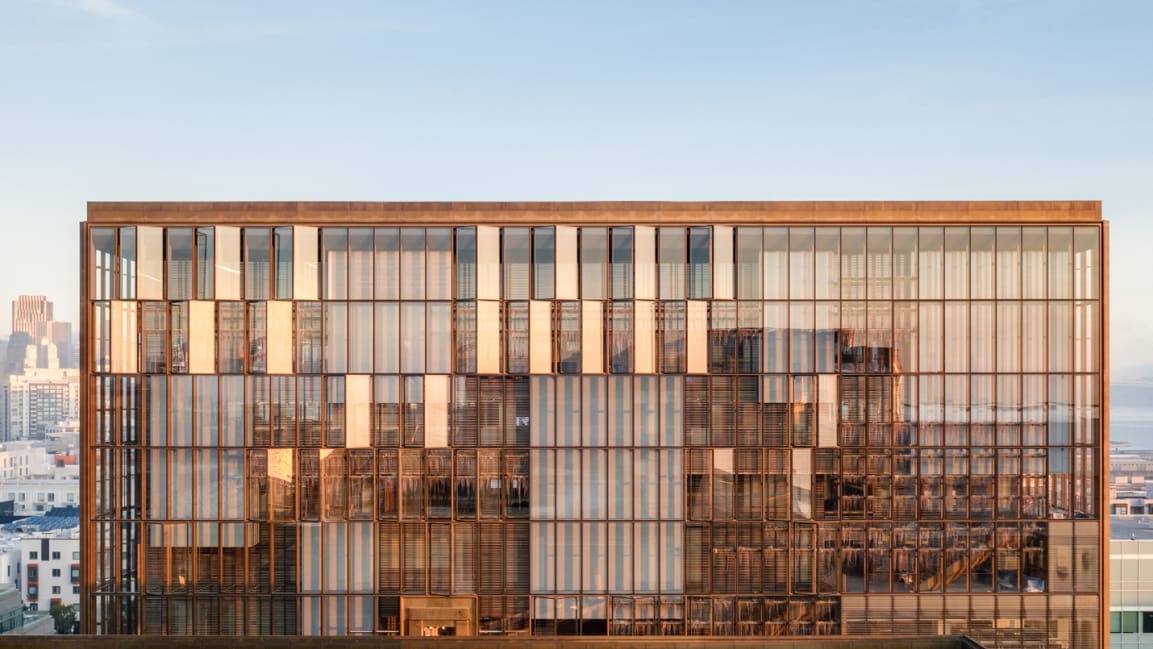