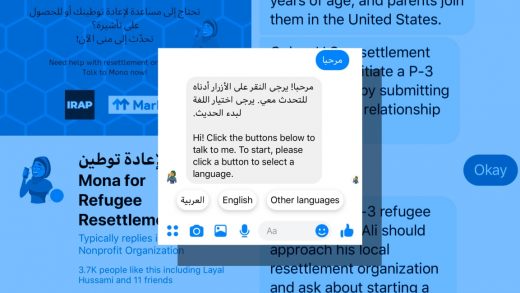 There’s now a chatbot to give refugees instant legal advice

For a Syrian refugee in Lebanon who is trying to navigate the legal path to resettlement, it can be difficult to find answers—and overstretched humanitarian organizations can take as long as three months to respond to an email when the demand for help is highest. A new chatbot called Mona, designed for Facebook Messenger and Telegram, can help more quickly.

Nomanbhoy and cofounder Peter Wasserman began working on the concept as students at the University of California Berkeley, and saw the desperate need for a better solution on field visits to Greece and Lebanon, where people at some settlements ran up to them asking if they were lawyers who could help. One refugee in Greece told them that he had contacted 38 NGOs in Turkey—with no response—before contacting a smuggler, who responded within minutes.

In a pilot that began earlier this year with the legal aid organization International Refugee Assistance Project, 5,000 refugees used the new tool. In its first iteration, it helps prescreen refugees for the nonprofit, asking questions that can help determine if someone is eligible for resettlement.

“The challenge is really designing conversations that are built to be empathetic and conversational but that also gather the right information,” says Wasserman. One Syrian refugee in the U.S., who was concerned about his parents stuck in Lebanon, used the tool and learned that they could be eligible for family reunification through him; it explained the next steps to take. When a woman traveling with a heart condition used the chatbot and explained that she needed an operation, the program flagged her case to the nonprofit, which determined that she was eligible for resettlement.

The conversations with the chatbot help refugees get immediate information, and also help the nonprofit’s limited staff work through cases faster. “We receive hundreds of inquiries a week from people who are fleeing from persecution and violence,” says Betsy Fisher, director of strategy for the International Refugee Assistance Project. “Using a chatbot allows us to get an initial picture of people’s circumstances rapidly using platforms that many of the displaced people are already using to identify resources and communicate with family. At scale, we hope that this will enable us to identify individuals much more rapidly for refugee resettlement, family reunification pathways, and other resources.” The team is currently evaluating the pilot, but the preliminary results show that it’s working, and refugees have rated the tool highly.

Because not everyone who uses the chatbot is eligible for resettlement, Marhub is starting to work with other partners to add more information to the program. Of the roughly 200,000 Syrian children who have been born in Lebanon, for example, the majority don’t have birth certificates. The chatbot will eventually be able to help them navigate that complex registration process. The team also plans to help connect refugees with cash assistance, work permits where possible, and jobs.

The chatbot is focused on Syrian and Iraqi refugees now. In Lebanon, Jordan, and Turkey alone, there are around 5.5 million Syrian refugees, many who have been displaced from their homes for years. But the startup also wants to expand to other areas. “The number of forced migrants worldwide has doubled in the past 20 years, so you can see that this is a trend that’s not going away, and it’s not something we can ignore,” says Nomanbhoy. “There’s a very limited number of resources. And so it’s about how can we use those resources effectively? How can we prioritize effectively, but also how can we save on costs where we can so that we can maximize the impact of the limited humanitarian assistance that’s available?” 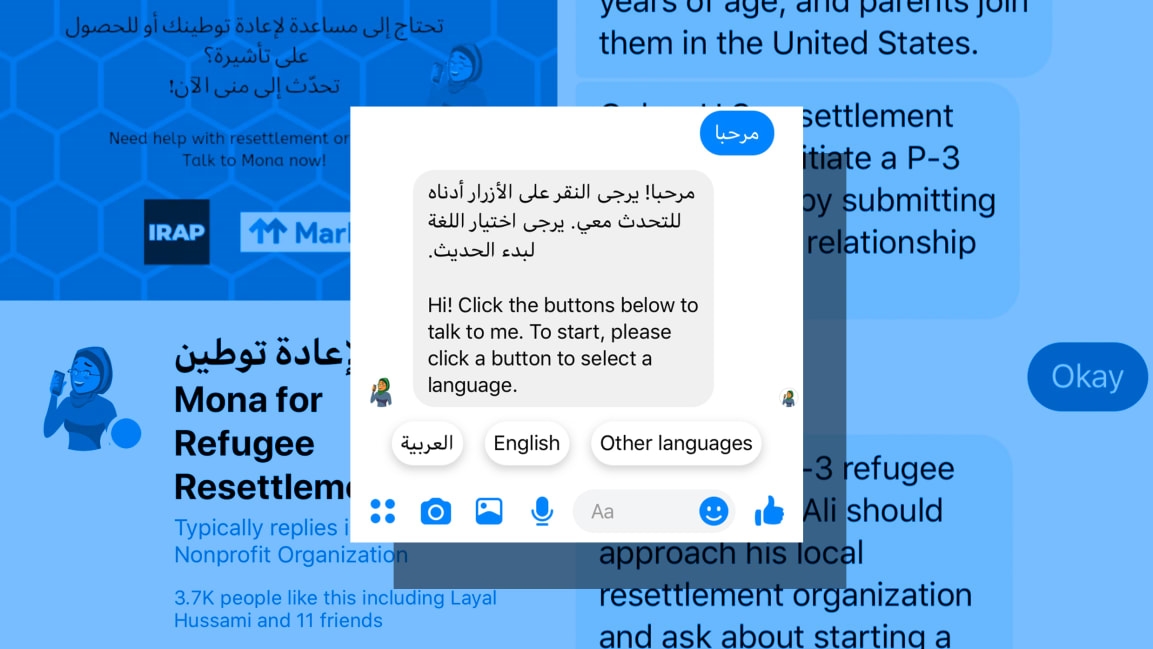