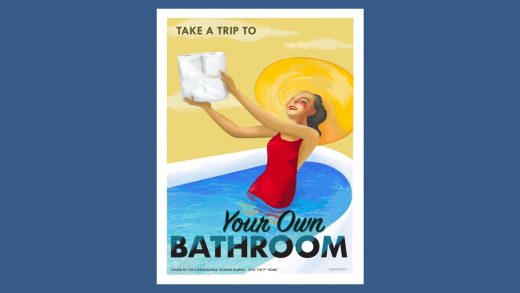 Designer Jennifer Baer was feeling anything but optimistic when her friends kept posting photos of themselves out in public even after states had issued stay-at-home orders. Seeing people disregard the advice while the rest of the world was in crisis mode made her really upset.

“My knee slap reaction was a threat to immediately delete friends who posted anything resembling public outings,” Baer told me via email. But she realized that her message was better shared with positivity. “I changed course when I conceived of some absurd concepts that might make the argument to stay home less about what you can not do and more about reframing perspective toward all the amazing things you could do.”

So what exactly does the stay-home tourism bureau have to offer? The three vintage-inspired posters feature the messages, “Surf Your Couch,” “Visit Your One House Plant,” and “Take a Trip to Your Own Bathroom” in hand-lettered script over illustrations that look like they could’ve been made in gouache. (In reality, Baer created the series in Procreate.) You can also get the illustrations on reusable totes, postcards, and more.

Baer parodied famous posters from the golden age of travel to emphasize the new reality we all live in—which is the exact opposite of glamorous. The beachball in José Morell Macías’ 1930s “Visit Spain” poster is replaced by toilet paper; the vivid yellow backdrop in Stan Galli’s famous “Visit Southern California” poster is replaced by a blue background and a vibrant green houseplant. (The iconic sunglasses are still there though.)

Baer cited inspiration from WPA artists and wartime propaganda posters, which used the large poster format as a tool to reach the widest audience possible. In her day job, Baer is a designer at NASA, and she was inspired by a recent series of vintage-looking “Space Tourism” posters from NASA’s Jet Propulsion Laboratory, calling them “fantastical and, with any luck, aspirational.”

And while it may seem a bit ironic that the message of a travel poster is to stay home, for Baer, the colorful concept was the right remedy when the news itself can be so disheartening. “The posters would be cheerful, colorful, sarcastic, and blunt but hopefully delivered via attractive imagery with shareable potential. Artists deal in the currency of subtle persuasiveness.”

Sure, postcards in this style are typically ones we bring home after a remarkable trip to a faraway land. But these technicolor postcards might be even more memorable, as capture the odd and singular time in which we’re living. 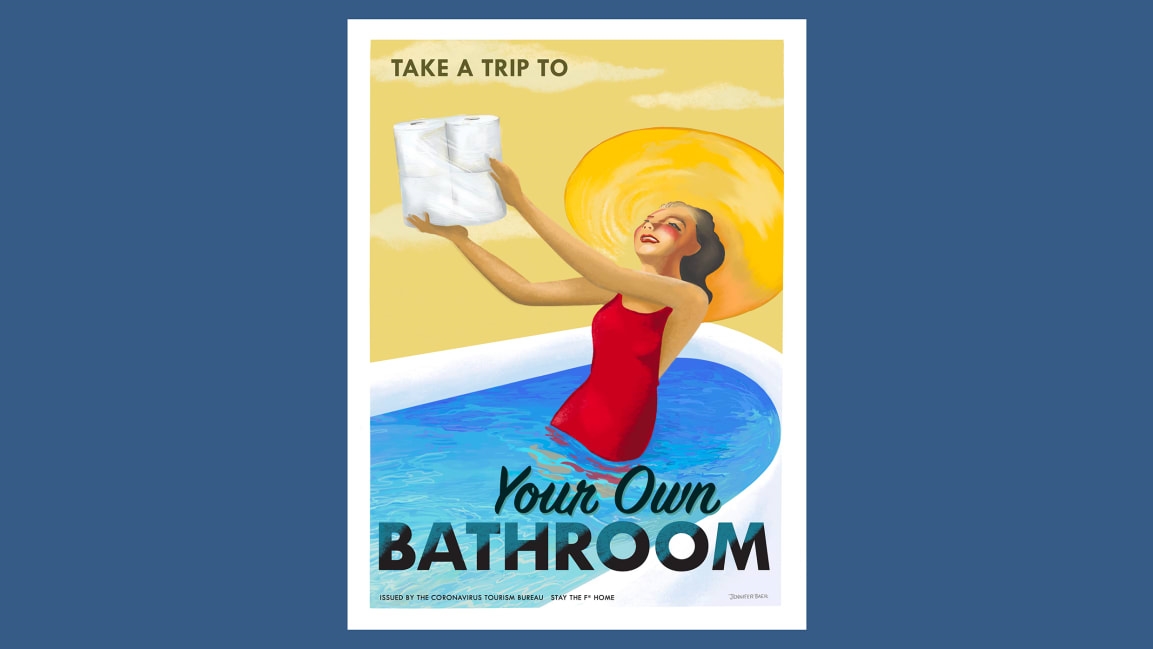