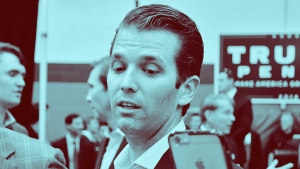 This Donald Trump Jr. Headline Had All Of Twitter Making The Exact “Same” Joke

Misery loves company, and this year it has had no shortage.

Many who were once casual newsreaders have found their thumbs fused to iPhone screens, incessantly scrolling through endless political travesty. Time has ceased to flow in linear fashion, somehow speeding by while dragging us over the edge of each second. Pets look sadder than they once did, perhaps in an effort to mirror the giants who take care of them. If you can’t be happy, though, the next best thing is knowing certain people are also sad. (July 28, 2017), a cathartic sinkhole of schadenfreude opened on Twitter as a legion of sads welcomed Donald Trump Jr. to the flock.

Following last week’s slowly unfolding saga of DJTJR’s 2016 Russian lawyer meeting, from which more and more people keep emerging, as if from a clown car, People published a story about the troubled scion. The headline says it all: Don Jr. Is ‘Miserable’ and Wants ‘These Four Years to Be Over’. This string of words proved irresistible to les misérables on Twitter. Many ended up greeting it in the same way. Excuse me, I meant the “same” way.

Quote-tweets involving the word ‘same’ often accompany news stories of an embarrassing or depressing nature. (Here’s a classic example.) They can also be self-aggrandizing or silly. In this case, seeing somebody who is part of the nexus that’s causing misery for so many, and who had previously been so aggressive and antagonistic about it, suddenly hoisted by his own inept petard–the irony resonated deeply. The wording of the headline seemed custom-designed for identification tweets, and boy did it ever get them! All throughout (July 28, 2017), Twitter resembled a baseball stadium crowd doing the wave, but with the “same” tweet.

See below for a whole lot more of the same.

I think I speak for at least 63 million people when I say…Same!
Report: Donald Trump Jr. ‘miserable’ https://t.co/IYi2kxoH9x

“Donald Trump Jr. is reportedly “miserable” and can’t wait for the next four years to end.” https://t.co/tWjuxeqC1s

so Donald Trump Jr “just goes to work every day and is miserable” and can’t wait for the Trump presidency to end? join the fucking club dude https://t.co/SNDtUFaGWU

So say we all https://t.co/rAgrWfU4Gh

Don Jr tells People Magazine he’s “miserable” and wants “these four years to be over.”

‘Miserable’ Don Jr. Can’t Wait for Donald Trump’s Presidency to Be Over https://t.co/RfZpZZuUJo via @yahooNewsUK How ya think we feel assho?

How one tantalizingly worded headline connected with a large swath of Twitter.

Misery loves company, and this year it has had no shortage.