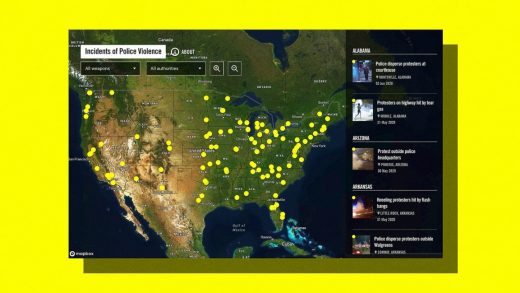 Amnesty International has documented the “most heinous” instances of police violence across the country during the Black Lives Matter protests and is today launching an interactive map of those acts.

The tool allows site visitors to click on 125 different episodes of police force between May 26 and June 5 and view a video of each incident along with some explanatory text. The incidents chosen took place in 40 states, plus D.C., which the international human rights organization says shows the sheer scale of the systemic problem.

“This is not a West Coast or East Coast problem,” says Brian Griffey, regional researcher and adviser for North America. “This is not an urban or rural problem. Throughout the U.S., there’s a serious problem with the excessive use of force.” The group hopes that illustrating the “widespread and egregious uses of excessive force against primarily peaceful protesters” will accelerate change that can be agreed upon by law enforcement agencies, policymakers, and the public.

About a dozen of the organization’s employees worked over two and a half weeks to collate the incidents from publicly available data. They pulled videos of more than 500 incidents from social media and condensed those down to the 125 most clear. Those videos were then verified via geolocation techniques and cross-referencing with other media assets, to ensure their truthfulness.

Videos, not images, were the main focus, because of the relative ease to geolocate them by their situational surroundings, but also because of the visceral nature of video content. “People are willing to open up their minds more when they’re stimulated by visual engagement,” Griffey says.

He cites the force against peaceful protesters in Lafayette Square, in Washington, D.C., as an example, when police in riot gear are clearly seen to be “throwing the whole kitchen sink” at protesters, in order to allow President Trump to travel to a photo op. “It’s irrefutable that the use of force was unnecessary and disproportionate,” Griffey says.

As well as narrowing by geography, site visitors can also filter the instances by police authority—federal, state, local, National Guard, and so on—and by weapon type. Viewers can see police driving through protesters in New York City, enveloping protesters in a cloud of tear gas in Seattle, and firing rubber bullets in L.A. and flash-bangs in Louisville.

All this serves to show the extensive nature of the problem. “This is not a question of a few bad apples in a few departments,” Griffey says. “This is a system-wide deficiency of U.S. law enforcement agencies.”

Amnesty International will continue updating the map if other human rights violations occur as protests continue. Ultimately, the group wants the government to acknowledge its human rights obligations, and to design policies to address the gaping lack of regulation and guidance for police force. It recommends measures including prohibiting no-knock warrants, ending qualified immunity, and outlawing the 1033 Program.

“We haven’t seen a drop of accountability yet,” Griffey says. “So, beyond just outrage and outcry, there needs to be a legislative fix.” 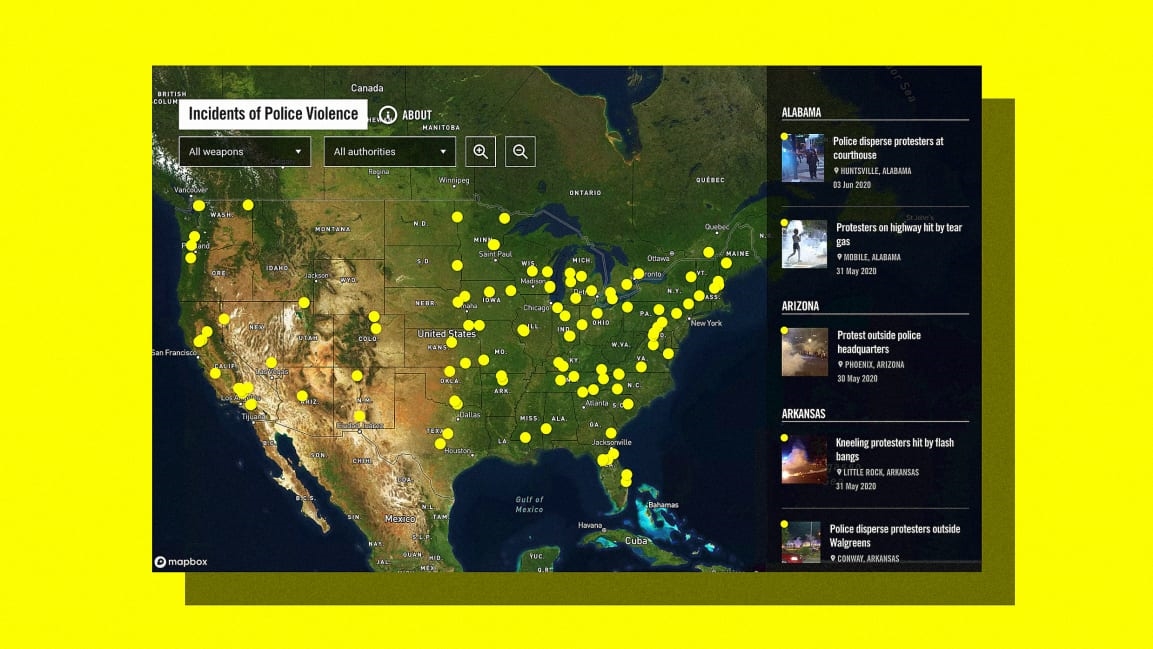