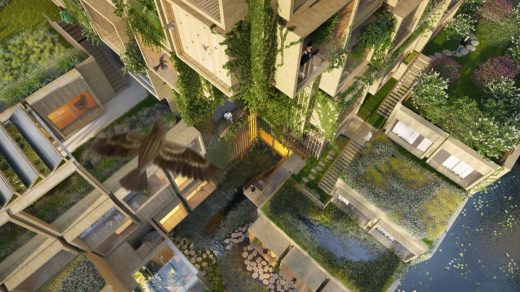 This new apartment building in Amsterdam is new housing for wildlife, not just humans

Amsterdam is in the midst of a housing shortage, and a new building will help, adding 82 apartments to the city’s inventory. But it will also help a different, nonhuman housing shortage, providing much-needed habitat for several other species, from nests in the façade for birds and bats to landscaping that supports hedgehogs and fish.

“We’re aiming for a few species of animals that now are disappearing from the city, like sparrows or bats or some types of butterflies, and tried to recreate their perfect habitat within this building,” says Jos-Willem van Oorschot, architect partner and director at VenhoevenCS architecture+urbanism, which partnered with DS Landschapsarchitecten on the design.

The site, on an island in a river near the city center, formerly housed a wastewater treatment plant, but is being transformed into a sustainable, car-free neighborhood. The new building, called Proto-Zoöp Zeeburg, uses a unique “zoöp” model that requires decision-making boards to include a voice representing nonhuman interests. (The name, short for zoöperation, is a combination of coop and zoe, the Greek word for life.) As the architects worked on the design, a “speaker for life” advocated for nature as each decision was made.

The terraced design creates plant-filled micro-habitats on roofs at different heights, with systems incorporated to store rainwater and keep the plants irrigated. “All of the roofs are different,” says van Oorschot. “The ones that are, for instance, closer to ground, are wetter. Some of them are more in the sunlight, so they are drier, and they have grasses. Some of them have higher bushes, so that will be for birds to hide. Some of them have plants that also provide food for birds or other animals.” The highest rooftop won’t be planted but will include soil where seeds can naturally germinate.

In the façade, nests and insect hotels are built into the walls. Spaces for sparrows include tiny holes and boxes; homes for bats are longer and narrower. Each home faces in a specific direction, based on the preference of the species. On the south wall, the habitats are integrated behind solar panels that generate power for the energy-neutral building. On the ground, where the land meets the river, a stone wall is designed with cracks to allow plants to grow and to give fish places to breed. On one side of the building, the wall is lower than usual, so animals like ducks and hedgehogs can climb out of the water and make homes in bushes on the grounds.

The ground floor of the building will house several organizations focused on nature, including nonprofits that research biodiversity. “They will use the building as a prototype that they will monitor over the next years to see if there is anything that we can improve on the design,” van Oorschot says. Construction will begin in 2024, with the building scheduled for completion in 2026. He thinks that nature-inclusive architecture will become more common. “I think it will be more and more completely normal to include both animals and plants in all of the designs in the future,” he says. “Our cities need this. And the world as a whole will of course benefit from this.” 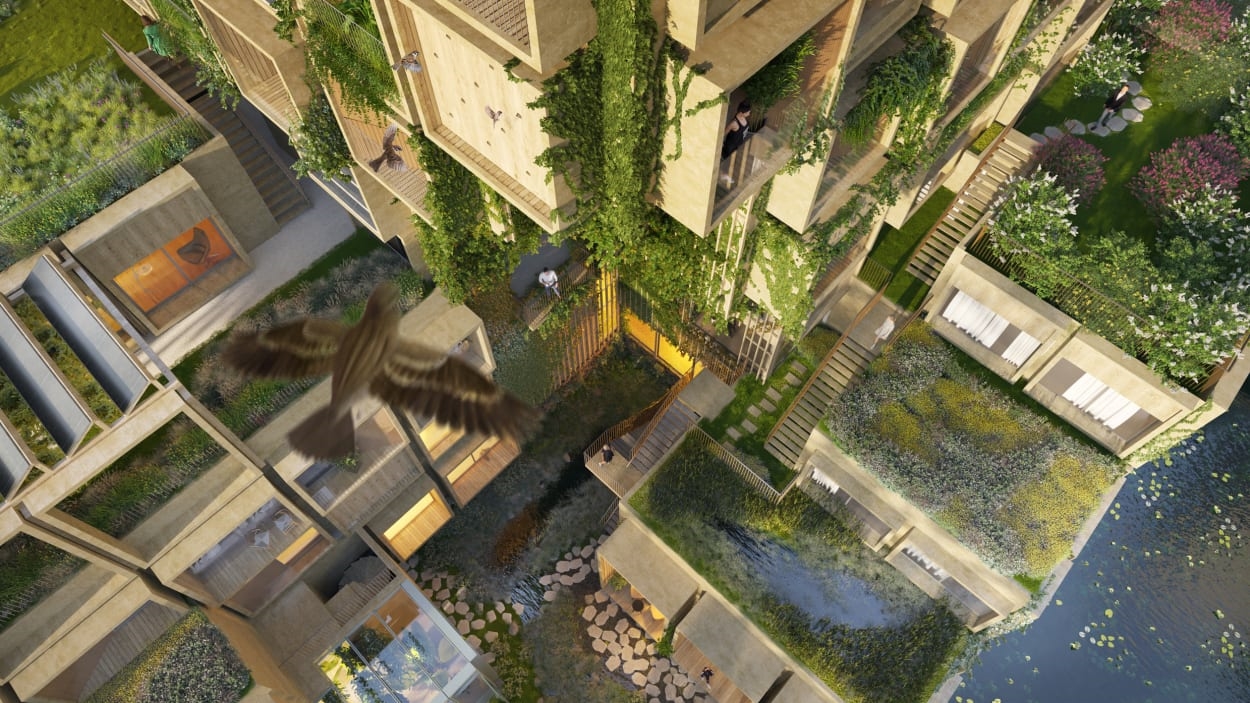