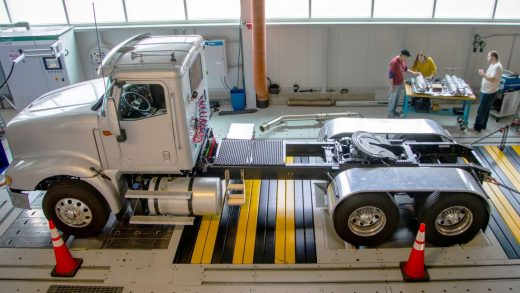 This new device captures CO2 from trucks as they drive

March 26, 2021
It’s turning out to be difficult to electrify semi trucks that regularly travel thousands of miles carrying freight. Manufacturers such as Volvo and Peterbilt have begun to produce electric models—and Tesla’s twice-delayed semi may come out later this year—but it isn’t yet clear how quickly they’ll be adopted. In the meantime, in the U.S. alone, there are around 2 million such trucks on the road. A Detroit-based startup called Remora designed a different solution for them: a device that can capture carbon emissions directly from each tailpipe.

While other carbon-capture equipment is designed to collect pollution from power plants or even pull CO2 directly from the air, the new technology is the first to focus on mobile carbon capture.

The device can be retrofitted onto an existing truck between the truck and the trailer, and it connects to the tailpipe. Exhaust flows through a “molecular sieve,” a material with tiny pores that can capture at least 80% of the carbon dioxide the truck spews out. It can also capture carbon monoxide and nitrogen oxide, pollutants that are harmful to health. “The other molecules in the exhaust that are harmless, like oxygen, just pass through and head into the atmosphere,” says CEO Paul Gross. (Cofounder Christina Reynolds developed the technology as a PhD student; Gross later came across the research while studying at Yale, reached out to Reynolds, and convinced her to leave a job at the EPA to launch the startup.)

As the truck drives, the adsorbent material is heated via waste heat from the exhaust, and the pores expand and release a stream of pure CO2 into a tank on the truck. “We’re able to do this continuously because while we’re heating up one side of the device, we’re capturing new carbon dioxide in the exhaust on the other side, and then we switch back and forth,” Gross says. The tank can hold the carbon generated from around 600 miles of driving.

When a driver pulls into a truck stop to refuel, they’ll be able to attach a hose to an offload tank that the company would install at gas stations. Depositing the captured carbon takes a couple of minutes—no longer than pumping fuel—and it can later be sold for use in products such as cement, where it can be permanently sequestered.

While similar technology could be developed for cars, the company wanted to focus on large trucks. Because of the weight of the trucks and the long distances they have to travel, it’s more difficult to make recharging a battery feasible. “It’s just going to be really tricky to have electric long-haul trucks,” Gross says. “And a lot of people think that it’ll never happen. Bill Gates wrote a blog post last year saying that even with big battery breakthroughs, electrification will probably never be a solution for things like 18-wheelers. My cofounder Eric [Harding] built hydrogen fuel-cell and battery-electric semi trucks for some of the world’s top automotive companies. And he saw from the inside the challenges with this. These trucks are just gonna have way less payload capacity, way less range, and take hours to charge.”

It’s also less expensive to work with existing trucks than to replace entire fleets. The device sells for around $15,000 (a new truck can cost 10 times as much, or more), and fleet owners will be able to share in the proceeds from the sale of the captured carbon. “An average semi truck will earn about $13,500 a year from the carbon dioxide that it’s capturing,” he says. “If we share half of that with a company, they’re breaking even and then actually earning some new revenue on the device over time.”

If a company uses the device in combination with biofuel, renewable natural gas, or another fuel considered carbon neutral, driving a truck could actually become carbon negative—removing more CO2 than it generates. “If we can get carbon-negative trucks on the road, why would we ever do all the infrastructure overhaul needed to get to electrification, which is carbon neutral?” Gross says.

The startup, which recently completed a stint at the prestigious tech accelerator Y Combinator, is currently testing the device in its Detroit lab and will begin pilot tests with some of the largest companies in the world this fall. The technology could also later be used in other forms of transportation. “We are really interested in doing this for locomotives and also for cargo ships, because I think those are two other forms of long-haul transport that are also going to be tough to electrify,” Gross says. “And they contribute a ton of carbon emissions to the global footprint.”

Captures Device Drive From they This Trucks 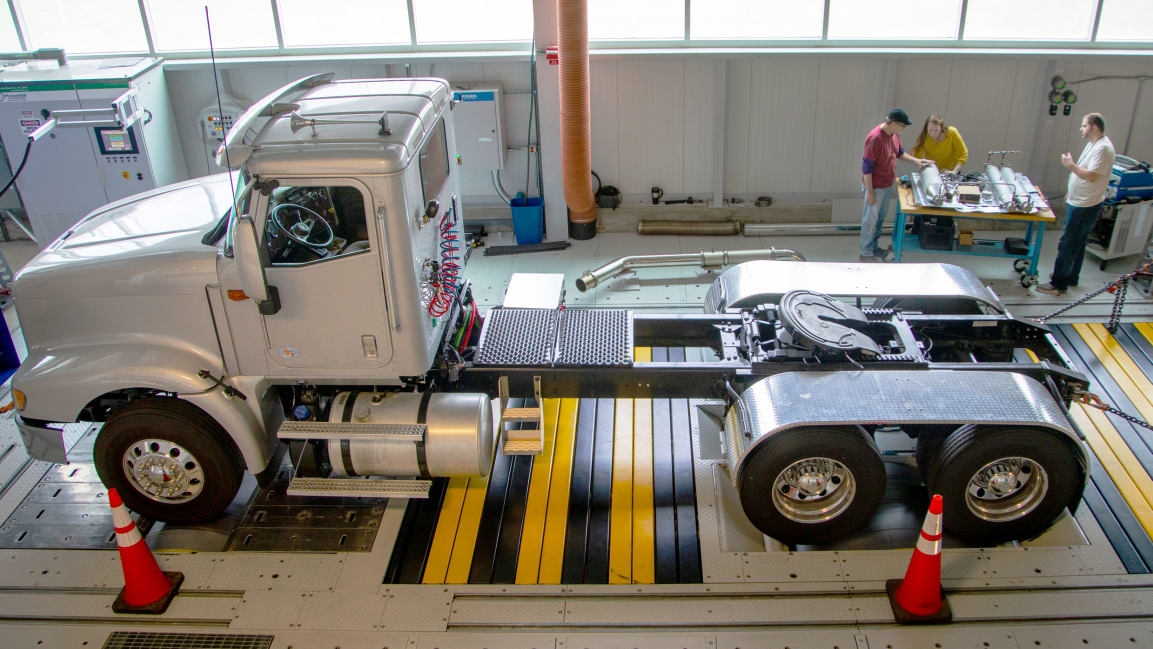