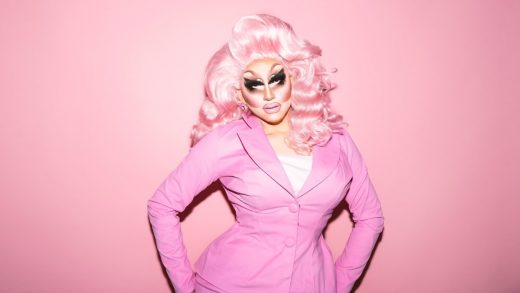 Trixie Mattel is doing things no drag queen has ever done . . . including RuPaul

Trixie Mattel is easily one of the most successful drag queens to come out of RuPaul’s Drag Race, which is ironic given the fact that she was eliminated four weeks into the competition, only to be brought back and eliminated again in season 7.

However, Trixie (aka Brian Firkus), who later finally got her sash and crown by winning RuPaul’s Drag Race: All Stars 3, has managed to spin that glimmer of fame into a growing empire that includes two studio albums, touring, cosmetics, and a wildly popular web show. Even RuPaul, who is credited for bringing drag to mainstream pop culture, is in awe of Trixie.

“I just saw RuPual recently and he was like, ‘You’re doing things no one has ever done–not even me,’” Trixie says.

The details of what Trixie has accomplished are in Trixie Mattel: Moving Parts, a “dirty and real” documentary that chronicles Trixie’s life and career.

“I’m a drag queen, so I was like, let me just get like a slap bracelet and some beads and we can put on a CD and wiggle. But instead, you watch the documentary and you can tell that I had no hand in it because it doesn’t show gloss and glamour and glitz,” Trixie says. “It’s filthy. It’s the 23 hours you’re not in drag.”

Moving Parts, which premiered at this year’s Tribeca Film Festival, is an honest look at not only what it means to be a working drag queen today, but also how to navigate a space where there are no rules.

“What I think this documentary shows well is, as drag queens, we want you to think there’s 10 people over here looking out for us. Mama, it’s just us,” Trixie says. “In this documentary, you’re like, ‘This fucker is really walking around airports, carrying his own bags, writing all those songs and jokes, putting himself in hair and makeup every night. When something wrong happens, we can’t go, ‘I got to call my people.’ I am my people, unfortunately–and my primary employee’s pretty disappointing. There’s no handbook for being a drag queen.”

One particular rough patch for Trixie was when her co-host of The Trixie & Katya Show suddenly left in the middle of production to check herself into rehab back in January. Trixie and Katya’s YouTube show UNHhhh was picked up by Viceland in 2017 and had enough buzz around it for the network to order more episodes. However, everything was derailed when Katya (aka Brian McCook) relapsed. Fellow RuPaul’s Drag Race queen Bob the Drag Queen filled in for the remainder of season one. As open as Katya has been about her her mental health and drug abuse issues, Trixie admits she was paralyzed as to what to actually do to help–let alone save the show.

“On a set like that, you set the tone. So I’m not going to freak out ’cause 50% of this team is freaking out,” Trixie says. “Nobody was mad. Nobody was sad. Everyone was just frozen in time, like how do we help? And the reason none of us know how to react is ’cause no one ever talks about it. It’s the reason people in her position, or anybody’s position, the last thing they’re allowed to do is speak up or ask for help.”

“In my comedy or music or my makeup, I’ve never been one to hold back. So in this documentary, and in true Trixie Mattel fashion, how do we truthfully and honestly go up to the line?” Trixie continues. “When Brian and I sat down to watch it, we both were so uncomfortable–room temperature Diet Coke didn’t help. Then we were like, ‘Well, that was difficult to watch, but that was exactly how it was.’ ”

In addition to hosting UNHhhh, which is back on YouTube as well as RuPaul’s Drag Race production company World of Wonder’s subscription streaming service, Trixie recently announced she’s releasing new music leading up RuPaul’s Drag Con L.A., which takes place later in May, as well as a cosmetics line.

“I love chronology. So my original album [Two Birds] was like 50s radio country. The second album, One Stone, was a little more like folk revival, late 60s. The new sound is a little more post-Beatles, like buzzy radio, hand clappy–it’s more fun,” Trixie says. “Fun things have been happening to me. Also, I’ve written enough sad songs that I’m like, I need a break. It’s not all that serious.”

Trixie had previously dabbled in the makeup business when her eyeshadow and blush palette with Sugarpill Cosmetics dropped earlier this year. But now she’s ready to move past those baby steps into her own company, Trixie Cosmetics.

“Before I was a drag queen I worked in cosmetics for five years, and it was my heart and soul, loved it. Every time a new product comes out, you pick it up, you read the ingredients, you see how it works. Mentally, you have a catalog of, this is what I would have done differently. Or when you see a product not sell, you think, this is why it didn’t sell. Or when a product comes out and hits the shelves, you’re like, no one’s going to buy that,” Trixie says. “For a living, you watch people shop for makeup, and so I feel like I’m very in touch with how people who are casual makeup users shop and what drag queens want.”

Hello? I’m calling to tell you that the first big reveal is FRIDAY!

“If drag has taught us anything, packaging matters,” Trixie continues. “So my products are all super fun. My goal is to make all the packaging so that at any age or stage in your life, you pick up this piece of makeup, and you feel like you are six years old playing with a toy. It feels fun and young and playful, because makeup is just body paint. It’s just for fun.”

With all Trixie has accomplished so far, she admits it’s easy to not fully take it all in, which is why she openly wept when she first watched her documentary.

“While you’re doing [drag], it doesn’t feel cool. It feels like you haven’t slept in three days,” Trixie says. “But watching [Moving Parts], at the end of it, I was really crying. I was like, this makes me feel like I did something with my life. In drag, sometimes you’re sitting there in a chicken suit like, what are we doing right now? This movie makes me feel like I could die and I did something.” 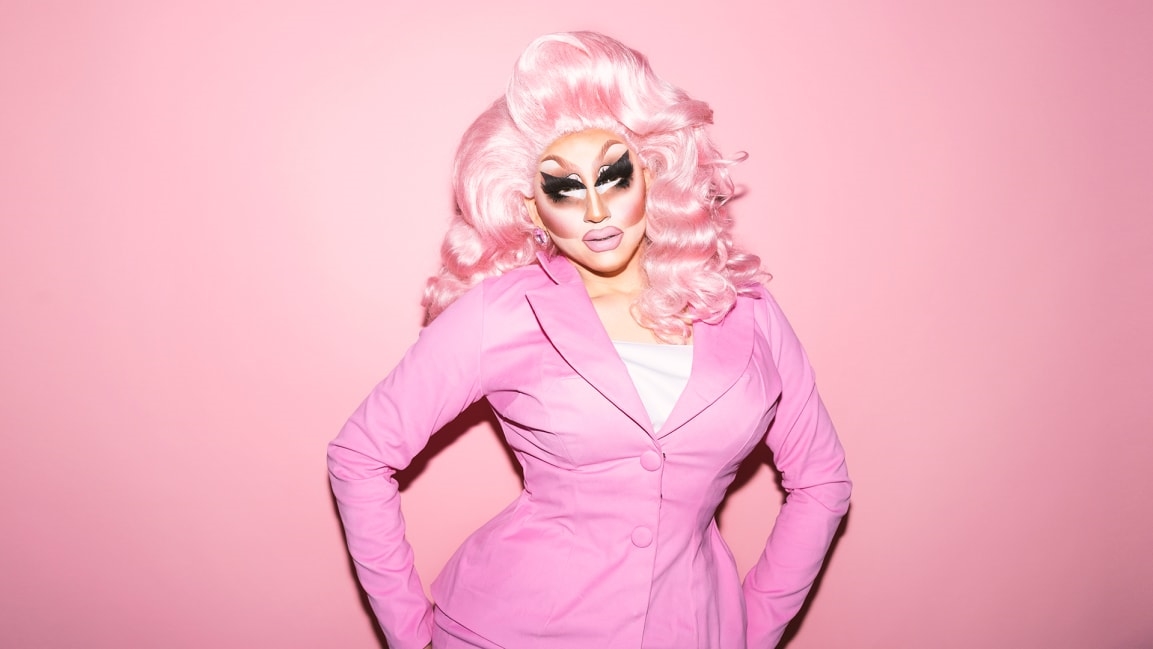