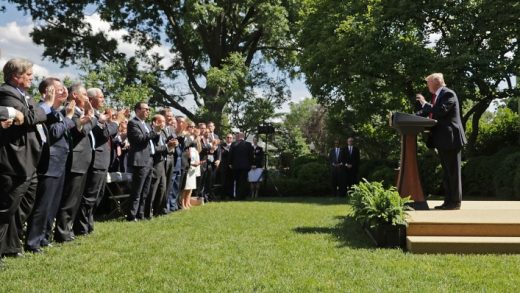 For the last few months, the conventional wisdom had it that President Trump’s senior adviser Steve Bannon was on his way out.

First, there were reports that his increasing visibility—from the cover of Time magazine to endless memes on social media and those SNL skits depicting him as “President Bannon”—had so enraged his boss that Trump was on the verge of booting the ruddy-faced alt-right nationalist.

Then, he was said to be on the losing end of a civil war in the White House, targeted by Trump’s daughter Ivanka Trump and son-in-law Jared Kushner, with Trump seeming to distance himself from Bannon in a New York Post interview. And he was booted from the National Security Council, which was widely perceived as a demotion.

Well, who’s laughing now? In just the last two days, Bannon has demonstrated his clout, with the fulfillment of one of his chief policy agendas—withdrawing the U.S. from the Paris climate accords—as well as a waiver that gives him unprecedented ability to communicate with his former staff at Breitbart News and reports that one of his allies is likely to be appointed to a broadcasting post that oversees U.S. government messaging to millions around the world.

“Steve never went away,” a Republican consultant who has worked with the Trump campaign tells Fast Company. “He knows when to keep his head down and to choose his battles.” Meanwhile, his supposed competitors have stumbled in recent weeks. Kushner’s name has been in the headlines as a “person of interest” in the FBI’s Russia probe and due to his real estate interests, some of which seem to present potential conflicts of interest. And despite vigorous appeals to her Dad to stay in the Paris accord, Ivanka couldn’t convince her father in the end.

Bannon’s longtime opposition to the Paris accord hasn’t gotten much attention, but he played a key role in swaying Trump on the issue. For the last few months, Bannon, EPA chief Scott Pruitt, and conservative activists kept working on the president to “privately reinforce Trump’s instinct and talking point that the U.S., coal miners, and the American worker are getting cheated by the Paris deal,” reports the Daily Beast. Bannon and his nationalist allies have long railed against the globalists supporting the Paris accord. In addition, he reportedly perceived the withdrawal as the fulfillment of a campaign promise that would appeal to Trump’s base, effectively conveying that message to his boss.

Ever since he joined the Trump campaign as its chief strategist last summer and even after joining him in the Oval Office, Bannon has maintained ties with the crew at Breitbart News, the popular right-wing website he led for years as chairman, staying in regular touch with its current EIC Matthew Boyle. And this week, a blanket waiver for presidential appointees clears Bannon to keep talking to his former subordinates at the news site. The waiver undercuts a complaint against the White House filed by Citizens for Responsibility and Ethics in Washington, a good government group that has claimed Bannon’s continued contacts with Breitbart staffers was an ethical violation.

The waiver clearly shows that Bannon will now have the unprecedented ability as a White House adviser to wield control over a news outlet, claims former Breitbart staffer Kurt Bardella in an email to Fast Company.
“This waiver confirms what we’ve known for a long time–that there is no line of separation between Bannon and Breitbart. There is no question that we’ve entered unchartered territory. It’s pretty clear that Breitbart is an extension of Bannon and now there’s a documented trail to prove it.”

Finally, this week Politico reported that the White House is close to naming Michael Pack, a conservative documentary filmmaker close to Bannon, to lead the Broadcasting Board of Governors, which comprises the Voice of America, Radio Free Europe, and Radio Liberty. In that role, he would have “unilateral power over the United States’ government messaging abroad reaching millions.” That appointment troubles Democrats and some Republicans because it essentially gives Pack (and possibly Bannon) the power to push their ultra-right ideas to a global audience, all funded by taxpayer dollars.

For all his controversial views and sometimes boorish behavior, Bannon has shown himself to be a canny survivor in an administration full of loyalists competing for Trump’s good graces.

The controversial adviser was reportedly sidelined in recent months, but Bannon worked diligently behind the scenes to sway Trump with anti-globalist arguments against the Paris accord.

For the last few months, the conventional wisdom had it that President Trump’s senior adviser Steve Bannon was on his way out. 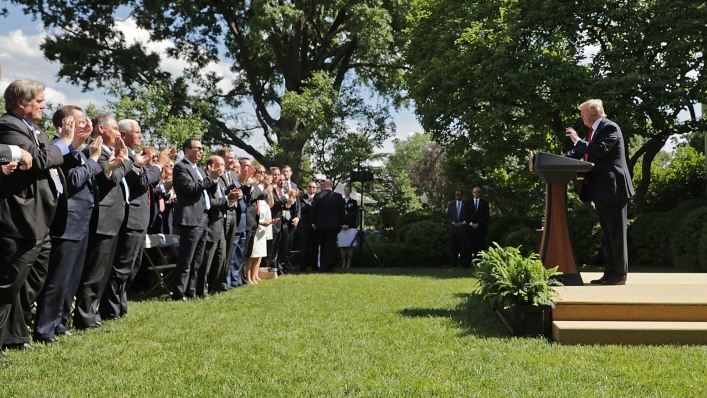