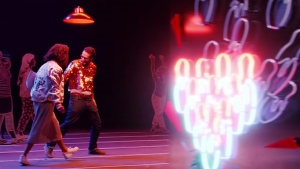 WHY WE CARE: Given that its actual product and services have disrupted an entire industry and changed the way many of us get around, is it unrealistic to expect Uber to have a better ad? The concept of a seamless journey through a fun night on the town is fine enough, but perhaps it’s the “awkward first date” feel of it all, combined with the slow, mellow sounds of Elvis’s “You’re The Boss,” that just makes it, well, boring.

Aside from the seamless transportation experience, what does it tell us about the brand? Its image? Personality? Not much. In fact, if you took the tagline off the end, could this pass for some sort of mid-range vodka ad? Probably.

Last week, Apple marketing executive Bozoma Saint John announced she was leaving to become Uber’s new chief brand officer. Given her tenure at Apple including working on spots like Taylor Swift’s workout, that Slick Rick hangout with Mary J. Blige, Kerry Washington, and Taraji P. Henson, as well as appearing in an ad herself with James Corden, her impact on the creative advertising at Uber can’t come soon enough.