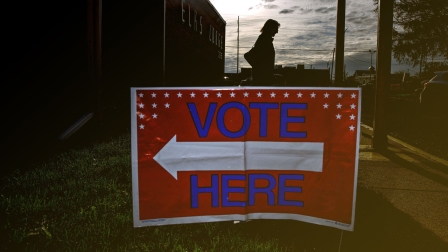 As election day draws near, many Americans are not thrilled with their options for president. Both candidates have historically high unfavorable ratings, with Hillary Clinton at 53% and Donald Trump at 61%, by one recent measure. That’s left a sizable proportion of Americans struggling with how to vote. According to CNN’s latest tally, some 14% of registered voters plan to cast ballots for a third-party candidate, whereas third-party candidates received less than 1% of the popular vote in each of the three past presidential elections.

It’s easiest to enhance one’s moral value by taking a principled stand when there’s minimal risk in doing so.

Undecided voters this year feel considerable antipathy toward both the Democratic and the Republican nominees; many supported Bernie Sanders in the Democratic primaries, while others tilt conservative but are turned off by Trump. So far, most are considering moving their support to the Green Party’s Jill Stein or Libertarian candidate Gary Johnson, or just not voting at all. Enough voters fit this description, in fact, that earlier this week Politico thought to ask, “Could undecided voters swing the election?”

That question may not be answerable until November 8, but until then, research in moral psychology may shed some light on the decision this segment of the U.S. electorate is grappling with. As in much else this election year, there may be more to it than just politics.

Scientists know that people care deeply about seeing themselves and having others see them as morally upstanding. But psychologists also know that people love opportunities to enhance their moral reputations and sense of self when there’s little or no personal cost.

After all, it’s easiest to enhance one’s moral value by taking a principled stand when there’s minimal risk in doing so. One recent set of studies found that when people take principled stands (those who do are called “deontologists”), they’re seen by others as more trustworthy than those who make decisions based on what leads to the greatest good (“consequentalists”). Because it’s the deontologists who get rewarded, people tend to shy away from consequentialism, but with a caveat: This happens primarily when we think the decision isn’t that important. But when we do, more of us turn into consequentialists.

In one classic ethical thought experiment, called the “trolley problem,” a loose trolley is barreling down a street; it risks killing five people or just one, depending on whether you pull a lever diverting its course. Researchers have crafted variations of this scenario, but typically it’s used to illustrate that when people realize the importance of saving lives, they tend to make a decision for the greater good.

This tendency may inform third-party voting patterns come November. In states with tighter races, a larger percentage of eligible voters typically go to the polls. In 2012, according to FairVote, voter turnout averaged 66% of eligible voters in the 12 most tightly contested states but only 57% in the remaining states. And as the Atlantic recently reported, over the past three presidential elections, third-party candidates garnered lower shares of the statewide popular vote in hotly contended battleground states.

In other words, when an individual voter had cause to see their own vote as mattering less to the outcome, they were more likely to make a principled (or “protest”) vote for a third-party candidate or abstain altogether. Voters want to feel or look moral when there’s a comparatively low cost.

When making a moral decision, we aren’t always “rational” deciders.

(While it’s harder to speculate, it may even be that this year’s third-party candidates are more appealing to people whose personal lifestyles are better insured to weather political gambles; the demographics, according to Pew, suggest that Stein’s and Johnson’s supporters tend to be relatively young and fairly well off.)

More Than Just The Facts

There’s another psychological principle to factor in, too. When making a moral decision, we aren’t always “rational” deciders. We don’t always weigh the information at hand evenly, because there’s already a moral conclusion that we’d like it to confirm—typically one that’s in our own self-interest. This phenomenon is called “motivated moral reasoning,” and we usually aren’t aware we’re doing it.

So for instance, someone who supports a third-party candidate may have thoroughly rational reasons why they’re planning to cast a ballot for someone they know won’t be elected, like to inform politicians about where the electorate is leaning, or let them know about issues that neither party is paying enough attention to.

But people driven by these motivations, the research suggests, are likely to be guided by more personal ones, too. We all interpret information in ways that support our own beliefs (the well-known “confirmation bias”), after all. So while you may place a higher value on a protest vote than on one for either major-party candidate, there’s a good chance that you do so for more than just “rational,” issues-based reasons—like scoring “principle points” on the cheap.

Not Choosing Is Also A Choice

Finally, “omission bias” may also come into play for those considering third-party candidates—and lead them not to choose any of them. Dozens of studies have demonstrated that people judge harmful actions as worse than inaction. It’s no secret that many people consider voting for either Clinton or Trump to be problematic, and feel they’re making a more ethical decision by voting for neither.

This Is Your Brain On Politics:

This is the case, for instance, among many of the Republican politicians who’ve foresworn voting for Trump but demurred on endorsing an alternative. By avoiding that choice (an inaction), they’re able to feel as though they’re making a moral decision.

Not voting, though, is still a choice that impacts the election’s outcome; inaction, in this case, is no less consequential than action—and can very well contribute to the harm that a conscientious abstainer may be hoping to distance themselves from. But thanks to omission bias, these principled nonvoters are less likely to see it that way.

At the Democratic National Convention in Philadelphia, Sarah Silverman called out defiant Sanders supporters on the floor. “To the Bernie-or-bust people,” she said, “you’re being ridiculous.” You may disagree with her choice in adjective, but the uncomfortable reality (all too familiar to moral psychologists) is that choosing the lesser of two evils is sometimes the most rational, pragmatic, and ethical decision you can make.

That circumstance itself may strike you as ridiculous, frustrating, or totally depressing—but the eventual outcome might make you feel worse than taking a moral stand feels good.