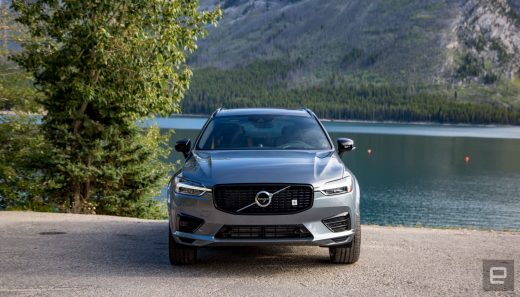 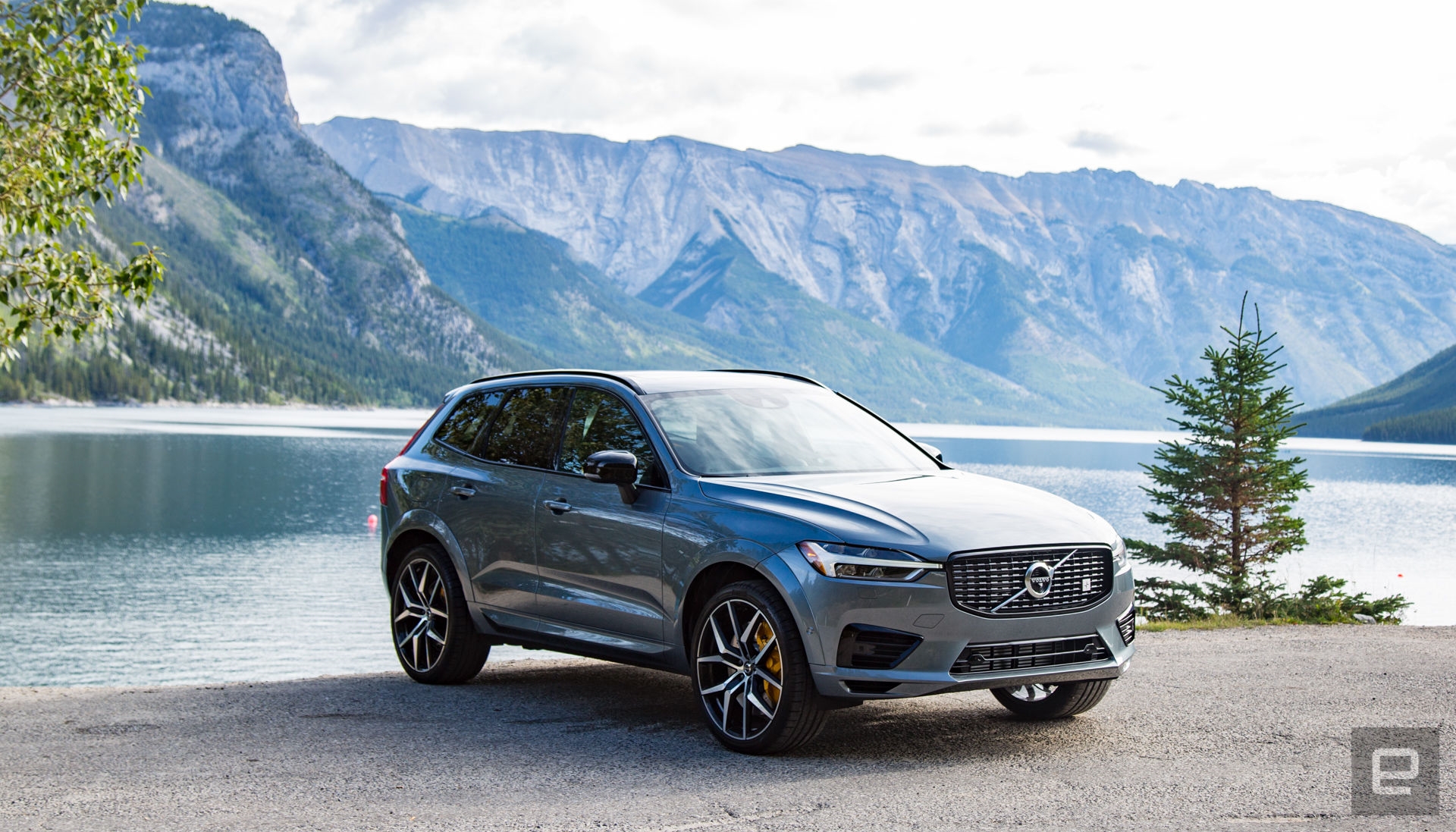 The Banff area in Canada is spellbinding. The mountains, the lakes, the spires of rock formations jutting towards the heavens don’t seem real. But also, no human could create something this beautiful. It’s also the best and worst place to drive the Volvo XC60 T8 E-AWD Polestar midsize SUV.

On one hand, the vehicle’s cargo area, its ability to seat five (and a combination of Swedish luxury and performance) make it a great companion for a trek into the forest. But, the rather low Canadian speed limits and my concern about wildlife leaping into the road make pushing the vehicle to its potential impossible. Fortunately, after some performance driving exercises at a small airport runway, the XC60 with its plug-in hybrid drive and turbocharger feels like a winner.

The XC60 gets the Polestar performance treatment in its powertrain and suspension. The vehicle outputs 415 horsepower and 494 pounds-foot of torque. It’ll do zero to 60 in 4.9 seconds, according to the automaker. Those numbers are pushed up by the vehicles combined use of a turbocharged 4-cylinder 2.0-liter up front and an electric motor in the back. The 11.6kWh battery pack helps the vehicle during spirited driving but should also deliver improved mileage numbers once the EPA has finalized their test.

Behind the wheel, that extra power offers up a more exciting experience for the XC60. Volvo is positioning the SUV against the Audi SQ5 in the US market. The Polestar XC60’s acceleration is solid, unless you stomp the pedal all the way to the floor, as there’s a very slight delay before the car takes off. I’m told that the optimal way to get the car up to speed is to deliver a consistent but deliberate motion to the gas pedal. I do so, and the Polestar engineered XC60 reacts the way I expected it to. 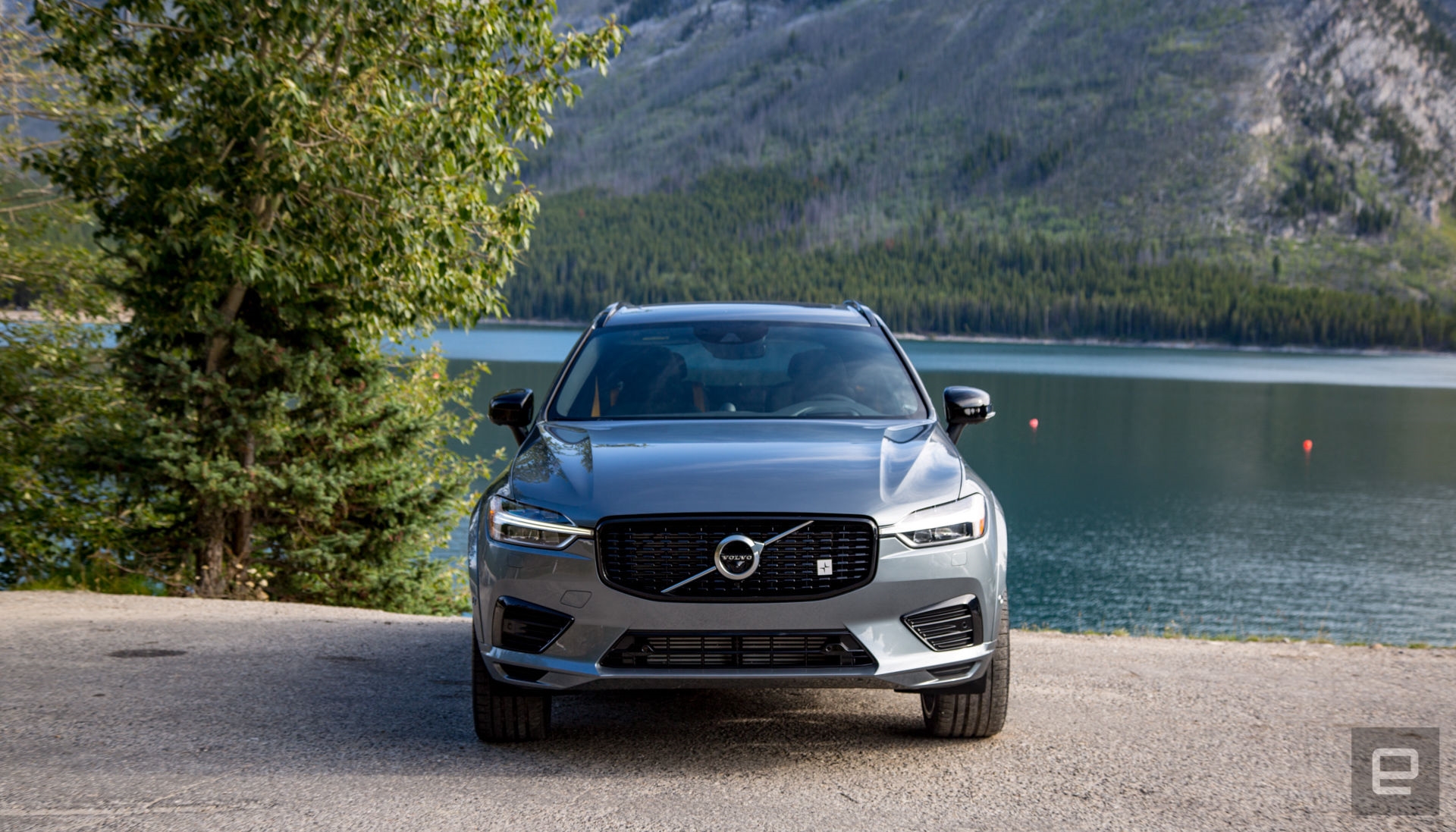 While I’m testing the acceleration of the vehicle I’m also given a chance to run it through a slalom where it performs impressively. The body roll is less than expected and hard braking from 155 km/h results in far less diving of the front end than I anticipated. These impressive body dynamics are thanks to Volvo’s use of O¨hlins adjustable suspension.

During calmer driving situations (which is essentially all Canadian roads), the XC60’s drivers assistance features are on par with other luxury brands. The adaptive cruise control tracked vehicles without issue and handled cut-ins with grace. The Lane-keep assistance system was impressive tracking corners as well as Mercedes’ system. Only the sharpest of highway curves tripped it up.

Inside the XC60 is the minimalistic Swedish design we’ve come to expect from Volvo. While the powertrain is new, the interior has pretty much remained unchanged for the past few years. Everything is where you would expect it to be. While the climate controls are in the infotainment system, Volvo still uses a physical knob for volume control which is always a plus.

The Sensus infotainment system remains one of my favorites. In the XC60 there was very little latency when I put the system through its paces. The layout isn’t typical with four features stacked vertically in the portrait-orientated display. One of the benefits of this layout is that CarPlay and Android Auto don’t take over the entire touchscreen when enabled.

The rest of the interior is spacious and comfortable. Even though the vehicle is built for the performance enthusiast, the seats are comfortable enough for a long day on the road. The SUV has enough room for five and with the second row folded down, the XC60 offers 68.7 square feet of cargo space.

Volvo continues to be the sleeper of the auto industry. Its vehicles are on par with larger luxury automakers and it keeps up without sacrificing its own design and dedication to safety. Throw in some Polestar engineering and that automaker’s XC60 plug-in hybrid should appease the fans of performance, comfort, and minimalist design.