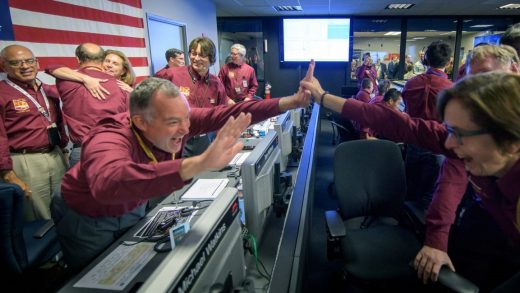 “We don’t do Star Trek”: How NASA landed on Mars, unlocking a new era of science

After seven years of development, seven months in space, and “seven minutes of terror” plunging through the Martian atmosphere at up to 13,000 mph and 3,000 degrees Fahrenheit, InSight touched the surface at a gentle 5 mph at 2:52:59 p.m. ET.

“Whoo-hoo!” Hollering and applause erupted from the throngs of NASA staff, VIPs, reporters, and social media ambassadors packing the Jet Propulsion Laboratory’s Mission Control and press rooms. At viewing parties across the country, including in Times Square, and across hundreds of thousands of office screens and mobile devices, untold numbers looked on agog.

Within minutes, her first image appeared: a dirt-spattered fish-eye view of Mars.

“To be in the room when the data stops, to know how quiet it gets, and then once it comes back—the elation!” gushed NASA administrator Jim Bridenstine in the post-landing briefing. International Space Station astronaut Alexander Gerst weighed in: “I got goosebumps watching the coverage!”

“Nice and dirty!” laughed InSight principal investigator Bruce Banerdt about the photo after garnering effusive applause. Since the mid-’80s—including some half dozen failed proposals—Banerdt has been trying to get the first seismometer on Mars since the 1976 Viking lander. “This is a longtime dream come true for me.”

Watch a recap of the landing:

Watch (and click around) a 360-degree video of the landing:

The eighth successful Mars landing, InSight will remain on the flat Elysium Planitia expanse gathering data during the next two years that will reveal Mars’s internal structure and clues to the beginnings of all rocky planets, including Earth. The earliest data should arrive in spring.

“Those answers are in the details of the structure formed very early in the planet’s history,” Banerdt told reporters at a pre-landing session last week. “On Mars, that structure has been preserved for the last 4.5 billion years; on Earth, it’s been scrambled up by plate tectonics and mantle convection, wiping away evidence of those earliest processes. So we’re going to Mars to study those early processes to help us understand how Earth got to where we are today.”

The first mission to study the deep interior of Mars, InSight—or, Interior Exploration using Seismic Investigations, Geodesy, and Heat Transport—will monitor the planet’s seismic activity, rotational wobble, and underground temperatures to determine the size, thickness, and density of its mantle, core, and crust, as well as current geothermal activity and number of meteorites. The lander will also have the first continuous weather monitoring on Mars, offering daily readings of temperature (now a balmy 35ºF to —93ºF), wind, and barometric pressure.

It was also a success for Mars Cube One (MarCO), a separate but coordinated mission testing the two first deep-space CubeSats (miniaturized satellites), which relayed images of InSight’s descent in near real-time, and transmitted the lander’s first shot. MarCO will spend the next two weeks transmitting data on the Martian atmosphere.

InSight has two cameras: one, a fish-eye lens offering 120- to 130-degree views that took the first shot; the other, a normal lens mounted on the seven-foot robotic arm. The latter will take 56 images that, when composited, will give scientists a 3D image of where the lander, seismometer, and heat flow sensor are, in space, from each other. The 3D imagery will assist in creating a digital elevation map and help with instrument placement—a task, that JPL science system engineer Elizabeth Barrett likens to “playing a claw game at a carnival, with blindfolds, on another planet.”

In order to get an accurate sense of what images would look like, JPL hired Hollywood lighting designers to install ceiling bulbs replicating the lighting on Mars in its InSight Test Bed. (Note Earth and Mars lighting comparisons below.) The simulation stage boasts a true-to-size (3.5-foot-high x 20-foot-wide) model lander on fine gravel to test instrument placement on unstable surfaces, as well as instrument and camera function in that environment.

From here, it’s another three months to survey the area, place, and calibrate the instruments. “It’s a slow-motion mission compared to others,” said Banerdt. “It’ll be six months before we can get a glimmer of what we’re looking for. The more marsquakes, the better we can see the inside.”

NASA will make raw images and seismic data available to the public and NASA’s Seismology in Schools program. “This science is for everyone,” said Banerdt.

“It’s the start now of answering a whole set of questions,” NASA’s chief scientist Jim Green tells Fast Company. “The more we understand about Mars, the more we’ll understand about how terrestrial planets evolve. It might help us interpret exoplanets and whether they’re habitable. If humans are going to live and work on Mars, they’re not going to want to build habitats that marsquakes are going to knock down. We don’t do Star Trek; we don’t go where no human has gone before. We need to know as much as we can before we send humans.”

See my feature on InSight for a more in-depth explanation of this science. 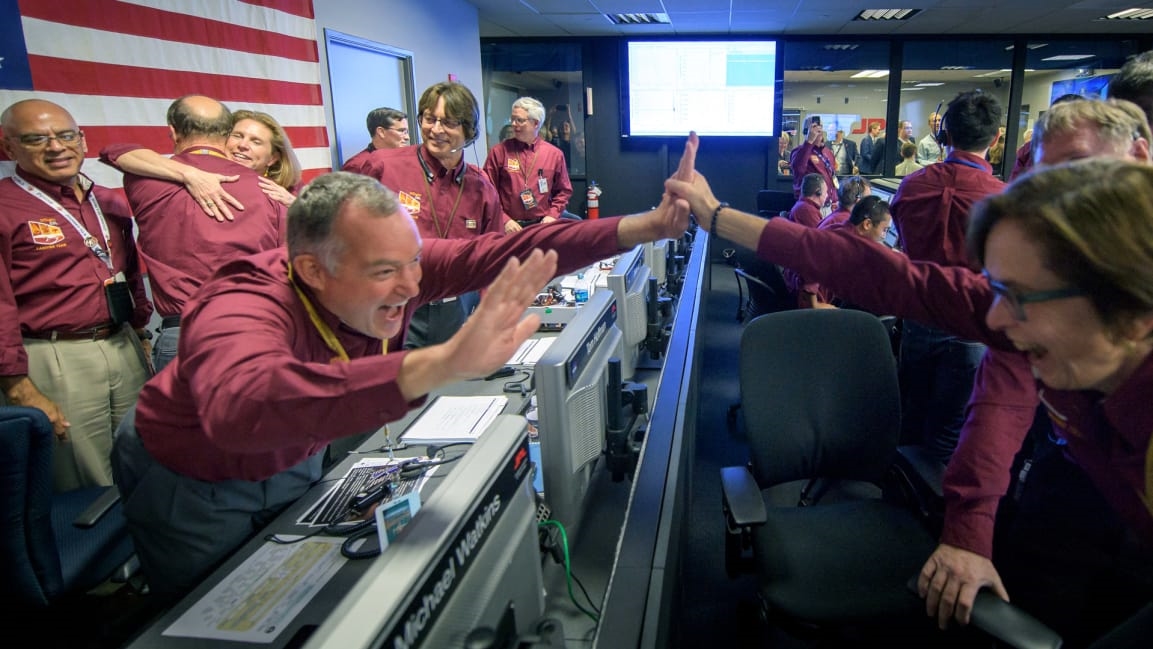